A no-fly zone in Syria could lead to a U.S. war with Russia -- but Hillary Clinton keeps on calling for one 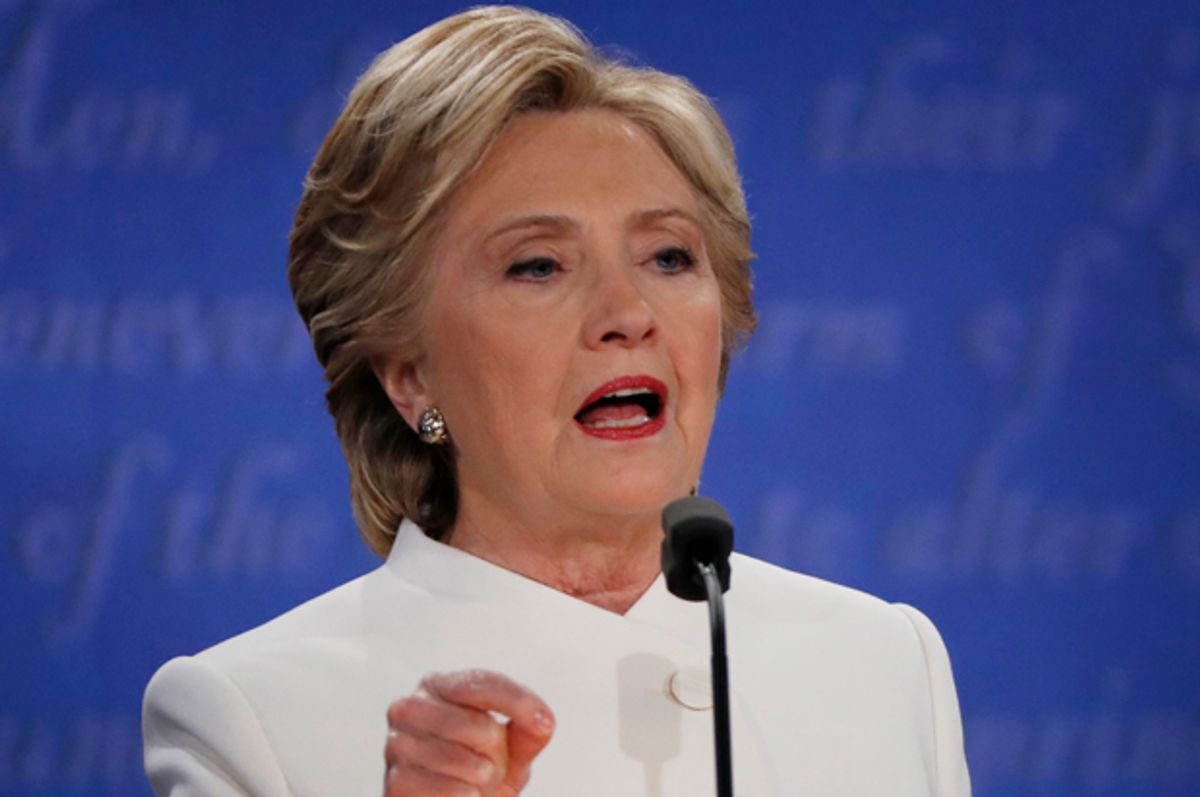 Democratic presidential candidate Hillary Clinton continues to call for a no-fly zone in Syria, insisting it would save lives. Yet, just three years ago, she acknowledged in a private paid speech to Goldman Sachs that a no-fly zone would "kill a lot of Syrians" and lead to "American and NATO involvement where you take a lot of civilians."

In numerous presidential debates, Clinton has proposed creating a no-fly zone or so-called safe zones in Syria, areas in which planes piloted by the Syrian government or by its Russian allies could not operate. If planes were to fly in these zones, they would be shot down.

Clinton repeated her call for a no-fly zone in the final presidential debate on Wednesday night. "I'm going to continue to push for a no-fly zone and safe havens within Syria," she said, adding that it would be "not only to help protect the Syrians and prevent the constant outflow of refugees, but to, frankly, gain some leverage on both the Syrian government and the Russians."

What Clinton did not acknowledge is that a no-fly zone would likely lead to war with Russia — the world's largest nuclear power.

Chris Wallace, the moderator for the debate, alluded to this in a follow-up question. He noted that, while Clinton has called for no-fly zones in multiple debates, Gen. Joseph Dunford, the chairman of the Joint Chiefs of Staff, has warned that imposing a no-fly zone could potentially kick off a war with Russia.

Moreover, "President Obama has refused to do that because he fears it's going to draw us closer or deeper into the conflict," Wallace added. "How do you respond to their concerns?" he asked. "If you impose a no-fly zone and a Russian plane violates that, does President Clinton shoot that plane down?"

Clinton conceded that she is "well aware of the really legitimate concerns that you have expressed from both the president and the general," yet avoided directly answering the question, doubling down on her policy. Instead of identifying a no-fly zone as a military strategy, she spoke of it as a diplomatic one, claiming, "I think a no-fly zone could save lives and could hasten the end of the conflict."

This argument, however, is undermined by what Clinton herself privately acknowledged just three years ago. An excerpt of a June 2013 paid speech Clinton delivered to Goldman Sachs, recently released by the WikiLeaks, shows that Clinton is well aware of how dangerous a no-fly zone could be.

"To have a no-fly zone you have to take out all of the air defense, many of which are located in populated areas," the former secretary of state explained in the 2013 speech. "So our missiles, even if they are standoff missiles so we’re not putting our pilots at risk — you’re going to kill a lot of Syrians."

"So all of a sudden this intervention that people talk about so glibly becomes an American and NATO involvement where you take a lot of civilians," she added.

Clinton also noted that Syria had "the fourth-biggest army in the world," along with "very sophisticated air defense systems" that had gotten even more sophisticated because of Russian imports.

The quotes from this speech were included in a list of excerpts of Clinton's paid speeches to Wall Street, which was attached to a January 2016 email to John Podesta, a close Clinton ally who now serves as the chair for Clinton's presidential campaign. WikiLeaks has published thousands of emails to and from Podesta.

In the same 2013 Goldman Sachs speech included in this document, Clinton pointed out that a no-fly zone in Syria would be different from the no-fly zone that was imposed in Libya in 2011, which ultimately led to the violent overthrow of the government.

"The air defenses were not that sophisticated" in Libya, she said. Clinton also noted that there would be many more civilian casualties in Syria than there had been in Libya.

"And then you add on to it [that] a lot of the air defenses are not only in civilian population centers but near some of their chemical stockpiles," Clinton added, referencing Syria. "You do not want a missile hitting a chemical stockpile."

The no-fly zone imposed in Libya paved the way for the toppling, and brutal killing, of former leader Muammar Qadhafi. The U.N. Security Council first established the zone ostensibly to protect civilians, yet it quickly led to a NATO bombing campaign.

In fact, every time a no-fly zone has been imposed, it has led to regime change.

Micah Zenko, a fellow at the Council on Foreign Relations, used NATO's own materials to show that, despite the humanitarian rhetoric behind the call for a no-fly zone in Libya, Western governments planned to pursue regime change in the oil-rich North African country from the very beginning.

A September 2016 report by the U.K. House of Commons' Foreign Affairs Committee also detailed how the war in Libya was based on an array of lies.

Regime change destabilized Libya, which had been one of the most prosperous nations in Africa. It now has no functioning central government, with rival militant groups fighting for control over various parts of the country. Many thousands of Libyans have been killed, and hundreds of thousands more have been displaced.

Today, Libya is a hotbed for extremism. In the country, the self-declared Islamic State has carved out its largest so-called caliphate outside of Iraq and Syria. In August, the U.S. launched a second bombing campaign in Libya, to fight ISIS.

Clinton's 2013 private comments appear to suggest that a no-fly zone could potentially lead to even worse chaos in Syria. Yet she continues to publicly call for one — after playing a leading role in the disastrous war in Libya.

Gen. Martin Dempsey, the former chairman of the Joint Chiefs of Staff, estimated in early 2012 that imposing a no-fly zone "would require as many as 70,000 American servicemen to dismantle Syria's sophisticated antiaircraft system and then impose a 24-hour watch over the country," The New York Times reported. That estimate was made before the Russian military intervened in the war, at the request of the Syrian government.

Even Robert Gates, the hawkish former secretary of defense who worked closely with Clinton, expressed concerns in 2011 before a no-fly zone was imposed in Libya. He warned Congress a no-fly zone would require “a big operation."

“Let’s just call a spade a spade,” Gates explained. “A no-fly zone begins with an attack on Libya to destroy the air defenses. That’s the way you do a no-fly zone.”