Leonard Cohen's farewell masterpiece: Whether this is goodbye or not, "You Want it Darker" is powerful and real

Leonard Cohen's latest has lovely, melancholy lyrics — and a better sound than he's given us in ages 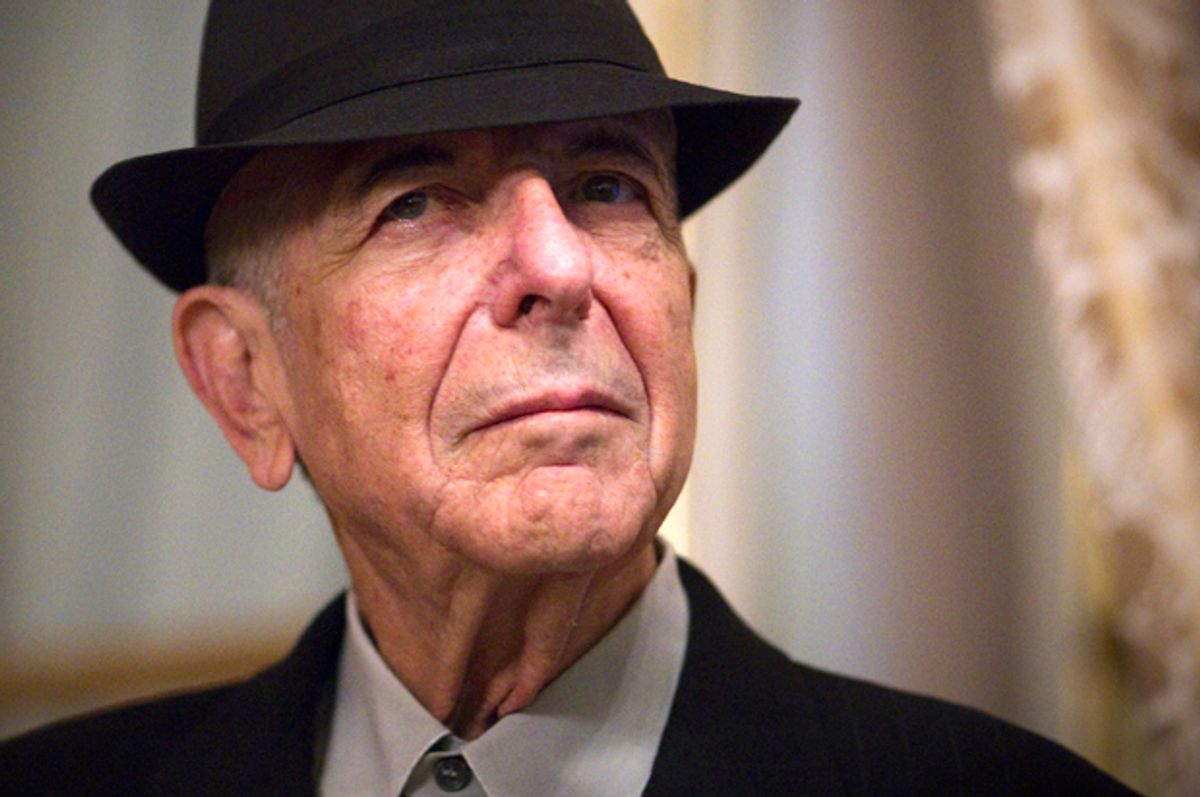 For two decades now, Leonard Cohen has been experiencing an Indian summer with almost no match in any art form. Besides a very few exceptions — jazz saxophonist Coleman Hawkins, composer Leos Janacek, novelists Philip Roth and Ursula Le Guin — has anyone turned out so much good work after the age of 60 or so? And despite Bob Dylan’s recent Nobel Prize for Literature, no one can argue that he’s doing better work now on par with his heyday in the 1960s and ’70s.

Even the recent celebration of the great nonogenarian Chuck Berry has to stop short of claiming substantial output since his late ‘30s. Cohen, on the other hand, has been on a genuine roll.

So the fact that Cohen has a new album at all is good news. The fact that “You Want it Darker” provoked a rich and insightful New Yorker story by David Remnick is even better. And it’s truly reason to bow to a Canadian/Jewish/Buddhist deity that the new Cohen record is dark, quiet and utterly beautiful. Its mournfulness is cut with a celebration of the complexity of human life.

It’s no surprise that Cohen, who is famous for crisp early songs like “Bird on a Wire” as well as more expansive, word-drunk numbers like “Famous Blue Raincoat,” has turned out another album with great lyrics. He was, of course, a poet a decade before he recorded any music, and his lyrics are among the few that can stand up on the page.

The phrases that drift through the record — “How broken I would be…,” “I turn my back on the devil/ I turn my back on the angels too,” “I’m running late, they’ll close the bar” — give “Darker” a twilit melancholy. Its language, at the very least, continues his very high standard.

The surprising thing, though, is that the music is as good as any Cohen record from the last 30 years. His gift for melody, as Dylan describes reverently in the New Yorker piece, is just about unsurpassed. But since the ’80s, his albums’ production have rarely done him any favors. Between cheap-sounding synths, busy percussion, and over-emphatic backing singers, some of his recordings since 1988’s “I’m Your Man” have sounded either like elevator music or flashbacks from Reagan-era sporting events. This despite the wonderful songs. (No wonder so much of Cohen’s greatest work comes either in covers by other musicians or in his legendary live shows.)

The sound of “You Want it Darker” is not quite austere, and not stripped down like his debut “The Songs of Leonard Cohen” — it’s just understated. Son Adam Cohen has brought in strings, a choir, an accordion, keyboards, and other instruments besides the usual acoustic guitar, but they all serve the songs, and are recorded with great balance and care.

“You Want it Darker” is full of sweet touches: The electric guitar solo on “Leaving the Table,” the lovely bits of classical guitar in “Traveling Light” (which appears to have no connection to the song sung by Billie Holiday), the understated fiddle in “Steer Your Way,” and the strings on the album’s last cut, a reprise of the song “Treaty.” (“I’m just somebody who's given up/ On the me and you.”)

Cohen recorded this album while he was suffering from a serious back injury, and his immobility and physical pain may have motivated lines like “I’m leaving the table; I’m out of the game.” Or maybe he really is dying; in a sense, we all are, but he may be going faster than the rest of us.

Let’s hope that this isn’t Cohen’s last album, which he suggests in the New Yorker piece, but it very well could be. If it is, it stands as a perfect farewell, a consummate example of “late style,” one of the rock genre’s greatest-ever meditations on love and loss, and a reminded of how much eloquent, heartbreaking work he's given us.