Don't believe the hype: Rumors of the debate moderator's evenhanded approach have been greatly exaggerated. 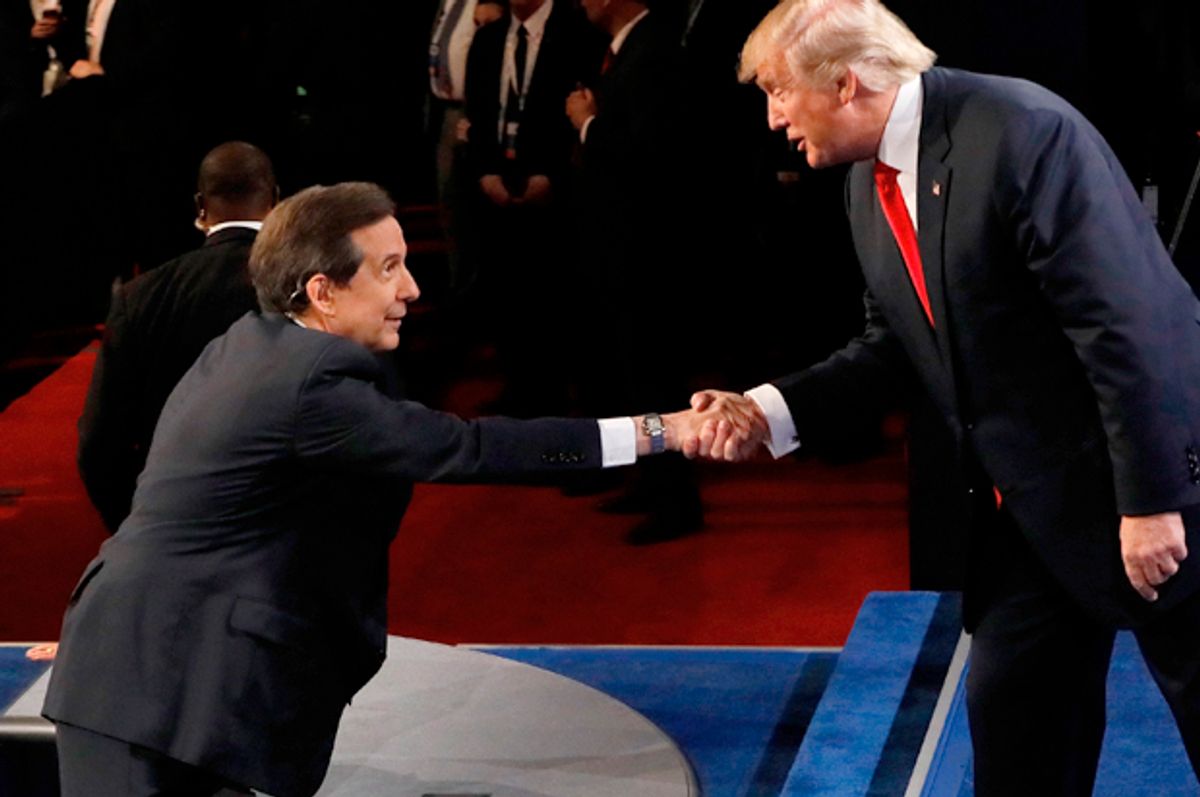 Let us now take a moment to not appreciate Chris Wallace and the job he did moderating Wednesday night’s presidential debate.

The Fox News anchor earned some plaudits from commentators on both sides of the political spectrum. Even ostensibly liberal outlets praised him for “offering sharply phrased questions that were sure to irk his skeptics.” Others in the mainstream media called him “focused and insistent” and proclaimed him the true winner of the night. My Twitter feed was full of Democrats praising his evenhanded approach to pushing both candidates.

But Wallace is still a creature of Fox News, with a point of view that he betrayed through his selection of several questions and the right-wing frame he gave to them. Which might have tickled the amygdala of conservatives everywhere but also managed to perpetrate for a mainstream audience a couple of the more pernicious policy myths that haunt our political discourse.

On abortion, he asked Democratic nominee Hillary Clinton to defend her opposition to a ban on “partial-birth abortions,” a medically nonsensical term invented by anti-abortionists to obscure the circumstances under which they are performed. Pro-choice forces have been pushing back on the nomenclature for a couple of decades, but it has become canon for the right that the procedure somehow involves performing an abortion of a fetus that is viable outside of the womb. Thus did anti-abortion propaganda make it into a presidential debate.

The proof of the phrase’s incomprehensibility was found in Republican nominee Donald Trump’s answer, when he described a partial-birth abortion as “rip[ping] the baby out of the womb in the ninth month on the final day,” a procedure that, as Twitter wags immediately noted, is called “giving birth.”

On the issue of both candidates’ economic plans, Wallace misled audiences about the nature of Clinton’s. After she talked about “investments” in areas like infrastructure and job training, Wallace said this:

It has been an article of faith on the right that the stimulus plan that President Barack Obama pushed through Congress in early 2009 was a failure because it did not result in turbocharging the economy and in fact harmed it. What Wallace failed to note, however, is that the economy had nearly collapsed in the fall of 2008, resulting in the deepest recession since the 1930s. The $800 billion stimulus package, about a third of which was tax cuts beloved by conservatives even though evidence shows they have little or no stimulative value, was designed to start pulling the economy out of a hole, not soup it up and enter it in the nearest NASCAR race.

But the way Wallace framed the question made it sound as if the stimulus caused GDP growth to slow to its lowest level since the Truman presidency. This is simply not true. GDP growth had already fallen thanks to the recession that started under the watch of Republican president George W. Bush. Arguing otherwise, as Wallace did, is simply Fox News dogma from the early Obama era, when the conservative line was to oppose every policy proposed by his administration.

Wallace also grossly misled the audience with a question on the future of Social Security and Medicare, an argument that has been so rarely mentioned over the last few years that you could be forgiven for thinking the polity had buried it in whatever landfill it had tossed the Simpson-Bowles report in 2012:

Wallace went on to ask the candidates if they would accept a “grand bargain” of tax increases and benefit cuts. Such a grand bargain was an unfortunate obsession of President Obama and congressional Republicans early in his administration. It is of much more importance to conservative deficit hawks than it is to voters, especially the lower-income ones who would be the most hurt by a deal that cuts entitlement benefits starting today.

It was a coup for Fox News to have one of its anchors moderate a debate, something conservatives have been pushing the Presidential Debate Commission to bring about for years now. And in Wallace, they found a seemingly fair-minded talking head. But he also brought all the baggage of Fox News with him — that is, the worst traits of the post-fact, post-truth moment in political discourse that we are living through, that has found its ultimate vessel in the form of Donald Trump.

In other words, Wallace’s questions were another example of right-wing talking points taking a stroll outside the usual bubble that encloses them. Unfortunately in a debate, there is no one, save the Democratic candidate, to push back on them.