Without debate, we need to talk about Afghanistan: Remember the longest-running war in our nation's history?

Have we really forgotten this conflict? It seems so, as the U.S. is quietly returning to its interventionist ways 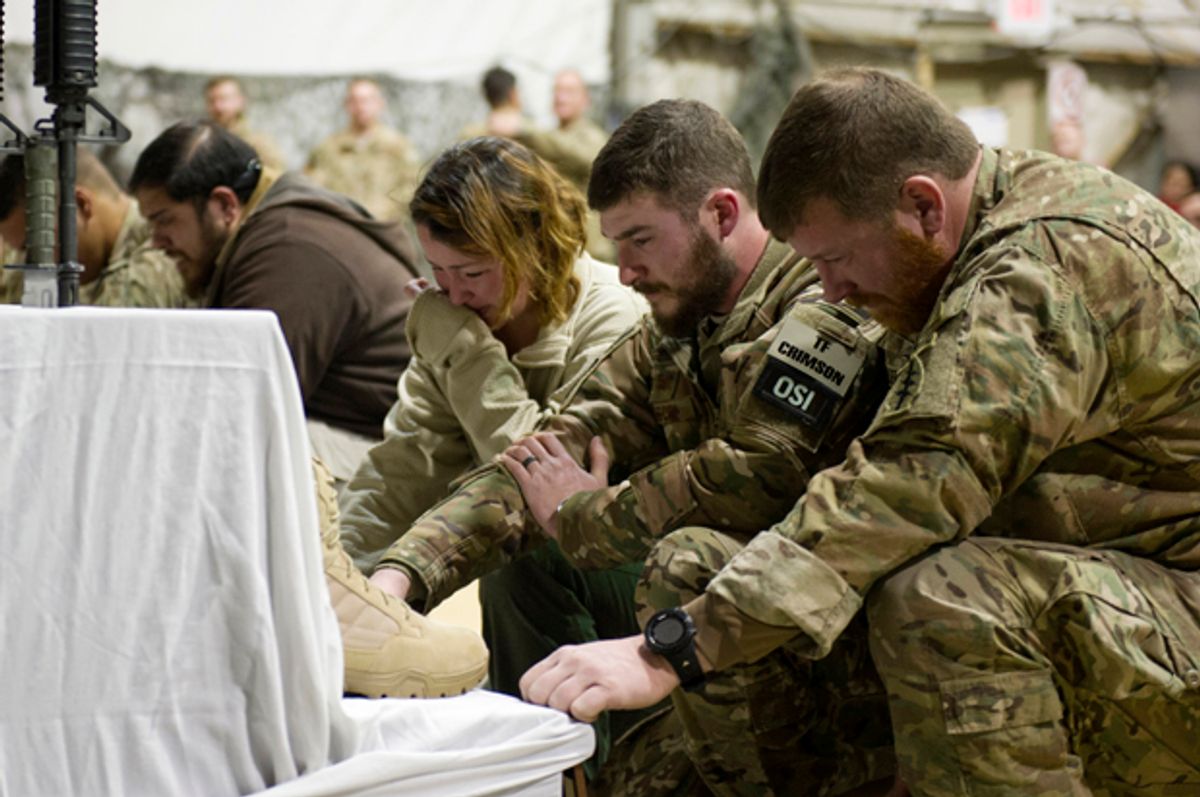 We have now concluded the presidential debates. Through three debates neither former secretary of state Hillary Clinton nor Donald Trump nor any of the moderators have raised the issue of the deteriorating conditions on the ground in Afghanistan.  The longest-running war in our nation's history is not even a blip on the average American’s radar.

That should bother us — a lot. As the election has demonstrated, our politics are increasingly disconnected from the larger world where our nation’s policies and military actions have life and death repercussions for whole nations. The issue-free zone of "Choice 2016" is all about personalities.

This week two Americans were killed in Afghanistan — one a soldier, the other a civilian. The latest deadly attack was south of Kabul. The Taliban resurgence has picked up steam in the war-torn north and south of the country.

The same day as the deadly attack on the Americans, the United Nations reported that 639 children have died and that 1,822 have been wounded since the start of this year, a 15 percent increase over the previous year.

While we are being distracted by our  2016 campaign for president people — children — are dying in the multifront global war on terrorism we launched and have no idea how to end.

The recent slaughter by the Taliban of 100 Afghan soldiers, who were in retreat, should not be ignored. This war has been a costly and deadly fraud that the U.S. corporate news media is ignoring and the two major-party candidates have yet to even mention because the truth about it is so awful.

Instead of a Pax Americana, we have a permanent state of war that is now just part of the background noise. For American teenagers born after 9/11 it has always been so. After withdrawing from Iraq and promising to leave Afghanistan, the White House is now building U.S. troops back up in both countries to counter ISIS and a resurgent Taliban that all came to pass on President Obama’s watch.

The U.S. military is on the ground in Somalia on a mission that The New York Times has described as an escalating “clandestine” war. Meanwhile, the U.S. Navy lobbed missiles into Yemen where we are supporting a Saudi Arabian military offensive that’s come under international condemnation for its toll on civilians.

“The Navy strike on Yemen reminds me of the Tonkin Gulf Incident that was used as a pretext to escalate the Vietnam War,” said Francis A. Boyle, a professor of international law at the University of Illinois, Champaign-Urbana. “I wrote a book — 'Foundations of World Order' — covering the period of the Spanish-American War through the First World War and its aftermath. Our current global moment reminds me of the run up to the First World War.”

Last Sunday on "Meet the Press" Vice President Joe Biden admitted that the U.S. was overextended in the Mideast when asked about why the U.S. had not pursued a no-fly zone over Aleppo, even as it tries to help Iraqis take back Mosul. “We could not do both,” Biden said, citing the advice the Obama administration had received  from the Pentagon.

In the eight years that President Barack Obama has been in office, we have come full circle — only now it is a much wider circle that extends from a vast swath of Africa to the west and as far east as Afghanistan. If the strategy has been containment, it has been a spectacular failure for which there has been no accountability.

What’s clear just by looking at a world map is that the way the U.S. has prosecuted the war on terror has actually proliferated it. And Biden’s comments underscore the reality that we are now at a tipping point that’s just not being discussed because it doesn’t fit into our narrative that "we have the world's finest military" that has matters well in hand.

The spectacular collapse of the Iraqi army and the inability of the Afghan military to go it alone are testimony to what amounts to the squandering of hundreds of billions of taxpayers dollars and thousands of American lives and hundreds of thousands of civilian casualties.

And we are not done yet. Even with a reduced force of close to 10,000 U.S troops in Afghanistan, U.S. taxpayers are on the hook for more than $20 billion a year.  The truth is the U.S. has no endgame and President Obama just doesn’t want America to lose any more territory as its permanent ward until he’s out of office.

The special inspector general for Afghan reconstruction reported last month that while the U.S. Forces-Afghanistan reported there were 319,000 Afghan soldiers, the actual number may be only 120,000. The special inspector general, John Sopko, has raised the distinct possibility that U.S. taxpayers, whose nation is already trillions of dollar in debt, are paying for “ghost soldiers.”

All too often, Americans are attacked by Afghans wearing the uniform of the Afghan army. Firsthand accounts of life on the front lines include vivid descriptions of Americans living in fear of being attacked by the very people they are supposed to be training. That's a sure recipe for PTSD.

According to the special inspector general for Afghanistan reconstruction, the “poor U.S. oversight, procurement, and contracting practices” were actually “enabling corrupt behavior.” As a consequence, without  “sufficient controls on U.S. funds, millions of dollars in U.S. reconstruction funds for Afghanistan were being wasted.”

“The Afghan government was so deeply enmeshed in corrupt and criminal networks that dismantling them would mean dismantling major pillars of support for the government itself,” according to the special inspector general's report. “One part of U.S. policy corrupted Afghan officials while other parts tried to investigate and root out corruption.”

At a time when so many American cities have badly deteriorated infrastructure, we have been flooding Afghanistan with vast amounts of money and, in the process, making it even more corrupt than we found it. As the money continued to pour in, the special inspector general's report found, “corruption grew so pervasive and entrenched that it came to pose a threat to the entire security and state-building mission.”

The report's analysis warned, “Failure to effectively address corruption in future contingency operations means U.S. reconstruction programs may, at best, continue to be subverted by systemic corruption, and, at worst, may fail.”

This is one deadly Virginia reel you can’t pin on members of the Bush clan, though they certainly deserve responsibility for getting us into this ever-widening quagmire. The news media is giving President Obama an ahistorical "do over" without holding him accountable for the very questionable last eight years.

Now it seems we are seeing an increased muscularity on display on all fronts, including cyberspace, as the president has solicited plans for a cyber attack on Russia for allegedly hacking into the Democratic Party’s email. No doubt there’s the creeping realization that the president has just a few months left to get some points on the board.

As we head down the home stretch of the presidential campaign and the corporate news media does its best to put the Trump genie back in the bottle, we're getting these sanctimonious riffs from the talking heads about how unprecedented the alleged Russian cyber hacking is for our pristine and inviolate democratic process.

What rock have these folks been hiding under?

We have got a bipartisan cadre of former high-ranking U.S. officials and political operatives who are now high-priced globe-trotting fixers who specialize in shaping other countries election results for fun and profit. Senator John McCain goes to Ukraine to give passionate speeches supporting the expansion of the European Union and President Obama goes to England and tells British voters how to vote on Brexit.

For decades we have been covertly and overtly manipulating other countries' elections. Whether it be our 1950s covert support of the British-engineered overthrow of Iran's democratically elected prime minister Mohammad Mosaddegh or our latest efforts to hack everybody on the planet, we have demonstrated that the only sovereignty we respect is our own because that's how God intended it.

At the same time in our post-9/11 reality, it is easy for the chief executive to wage war in several countries and spend hundreds of billions of dollars without any pushback. Congresspeople want nothing to do with any of it, other than to pose with soldiers in uniform and to make sure their contributors (defense contractors) get an uninterrupted flow of Uncle Sam’s never-ending green gravy.

The military industrial complex is firmly on autopilot because everybody whose anybody is making a killing and the only victims are taxpayers and the nameless civilians caught in the cross fire. And what were they doing living in those countries anyway?

Our voluntary armed forces have insulated the vast majority of American households from our ongoing campaigns now that we have made killing for the country just another lifestyle choice. Contrast that with relying on universal conscription so that every family had skin in the game. No doubt, our geopolitical decisions to go lethal would then get a lot more scrutiny: You want my son to do what? Where?