Are you my (substitute) mother? A guide to picking your celebrity stand-in parents

Feeling unmoored after the loss of my primary parent, I found comfort in the works and lives of these icons 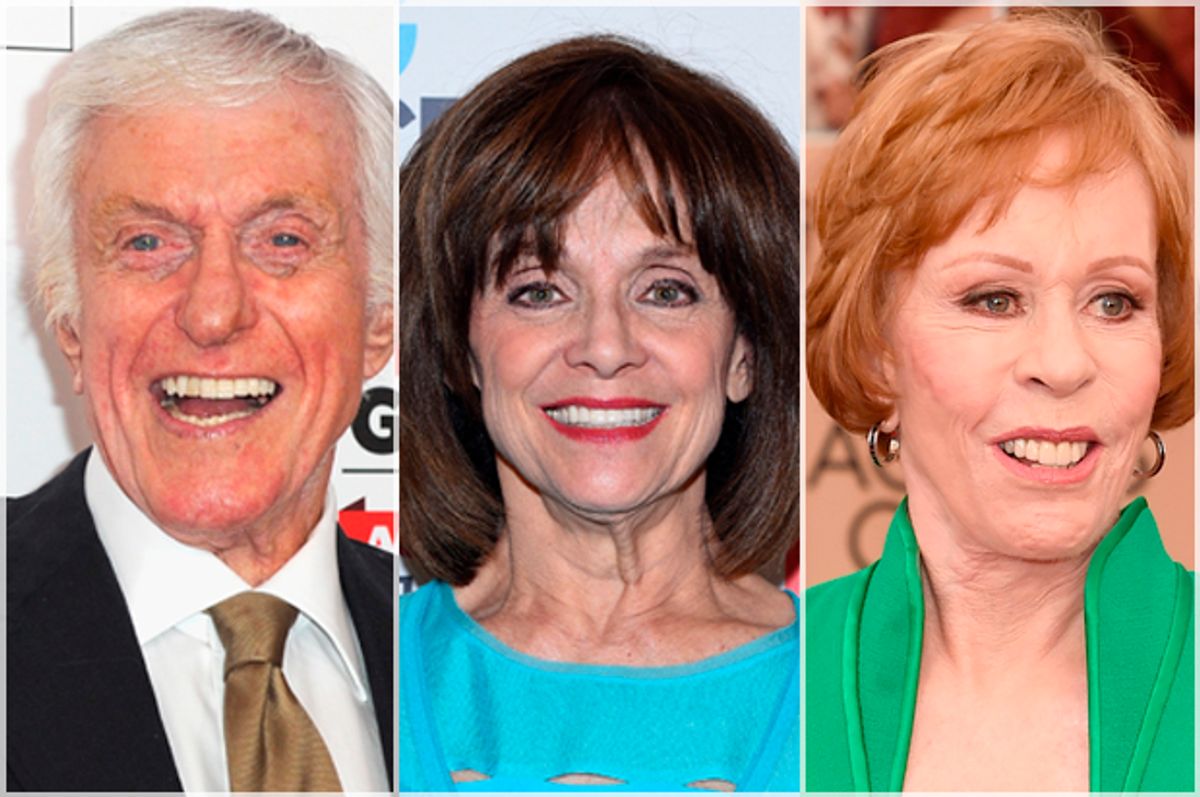 Tea made from the nectar of sleeping babies couldn’t soothe me as much as listening to a two-and-a-half-hour interview with Alan Alda. This I realized a few years ago, when I found myself compelled to search online for filmed interviews with actors of a certain vintage. Without setting out to do so, I had landed on five living television lions — Alan Alda, Carol Burnett, Valerie Harper, Marlo Thomas and Dick Van Dyke — and I lost hours listening to them tell their mostly upbeat life stories in various online forums, none more gratifyingly long-form and low-production-value than the Archive of American Television.

Across this time period, I watched all five seasons of “The Dick Van Dyke Show” with my daughter, who was too young for “M*A*S*H,” too old for “That Girl” and too millennial for “The Carol Burnett Show.” Then we watched as much of “Rhoda” as we could before she started high school and got walloped nightly with homework.

On my own, I read a book each by Burnett, Thomas and Van Dyke — comfort pages, you might call them. By the time I finally got my hands on a library copy of Harper’s 2013 memoir, I concluded that for a healthy middle-aged person who had never cracked “Middlemarch” but aspired to well-readness, there were probably better uses of one’s time than hoovering celebrity memoirs. I flipped longingly through Harper’s book but left it at the library, wondering as I was walking home why this had been such an agonizing decision.

It was probably around then that I figured it out: I was gravitating toward these beloved senior citizens because my mother, who was their contemporary until cancer got her in 2010, no longer existed. I — an only child who had lived primarily with my mom after my parents’ divorce — was feeling supremely unparented, by which I guess I mean un-presided over by a kindly elder. Collaboratively, Alan, Carol, Valerie, Marlo and Dick were standing in for my mother, like a multi-tentacled substitute parent.

I’d done something like this before. When I was in elementary school in the 1970s, I imagined that I was the daughter of George Harrison. The Lennon, McCartney and Starr families lived down the street in their respective homes, all of us in a reassuring row. In later years, a Monkee and then a Stone would replace Harrison as my surrogate dad.

When I was in my 20s and freshly broken up with a guy whom I would idiotically return to later, I found myself uncharacteristically preoccupied with cock-rocking bands — stand-ins for the missing boyfriend, as you surely see by now. When I became inured to the charms of Axl, Izzy and the other members of Guns N’ Roses, I moved on to the harder stuff: Metallica. Two decades later, it was the softer stuff: the Archive of American Television.

Since I seem to have grown into something resembling a functional human being, you might do well to listen when I tell you that you should seriously consider adopting celebrities as surrogates to help you cope with absence and loss. For me, this was an involuntary pursuit, but in case it can be taught, here’s how I suppose it works.

Pick a celebrity. Why a celebrity, rather than, say, an invented parent-like figment? Because celebrities are much less work: They appear on a screen whenever you want them to and they do all the talking. It’s not a bad idea to stick with actors, who, being actors, almost always act happy while being interviewed. I recommend selecting an actor whose age roughly correlates with that of the person you’re trying to replace. If it’s a parent, maybe skew a few years older, as I did, to give the person that much more imaginary authority.

Always look to celebrities who are firmly on the missing party’s side of the issues. For example, if your late father loved guns and hated the U.S. government, Ted Nugent may be your perfect surrogate dad. I see now that I had summoned actors who are politically liberal so that they could carry on my dead mother’s mission. A few years ago, when I watched Burnett, a guest on the online talk show “Mondays with Marlo,” tell Thomas that she approved of Occupy Wall Street, I knew that Burnett was stuck with me for life.

Even if it’s a solitary parent that you’re trying to replace, you should always go with multiple candidates. Since this is a no-cost fantasy, there isn’t an imperative to skimp. Bonus: If your picks have worked together professionally, you can enjoy that cozy “two parents” illusion. Note that Dick Van Dyke was briefly a cast member on “The Carol Burnett Show,” on which Alda and Harper guest-starred, and I really hope I don’t have to tell you that Alda was prominent on Thomas’ super fantastic “Free to Be . . .You and Me.”

Even better: Alda recruited Burnett to play his wife and the mother of his kids in his 1981 movie “The Four Seasons,” so I had to expend zero effort imagining them as my own married parents. But the actors you’re recruiting need not be parents (Thomas isn’t one) or known for playing one. (Harper’s Rhoda was pointedly childless.) These people are actors, after all; let them do their job and act like your parents.

The other reason to not restrict yourself to one substitute parent: If you do, you may find yourself orphaned all over again. Conversely, if you have five prop parents, there’s lots of backup. Of course, the downside to becoming attached to celebrities is that when they die, it will really sting, although hopefully not as much as losing your actual parent did. Fortunately, you can always have someone stationed in the wings, waiting to take his or her star turn in your mind — at least until you’re as old as Dick Van Dyke is now. Then you’re truly on your own.

Nell Beram is a former Atlantic Monthly staff editor, a former columnist for The Awl, and coauthor of "Yoko Ono: Collector of Skies."