Bugs — it's what's for dinner: Why edible insects' time may have finally come 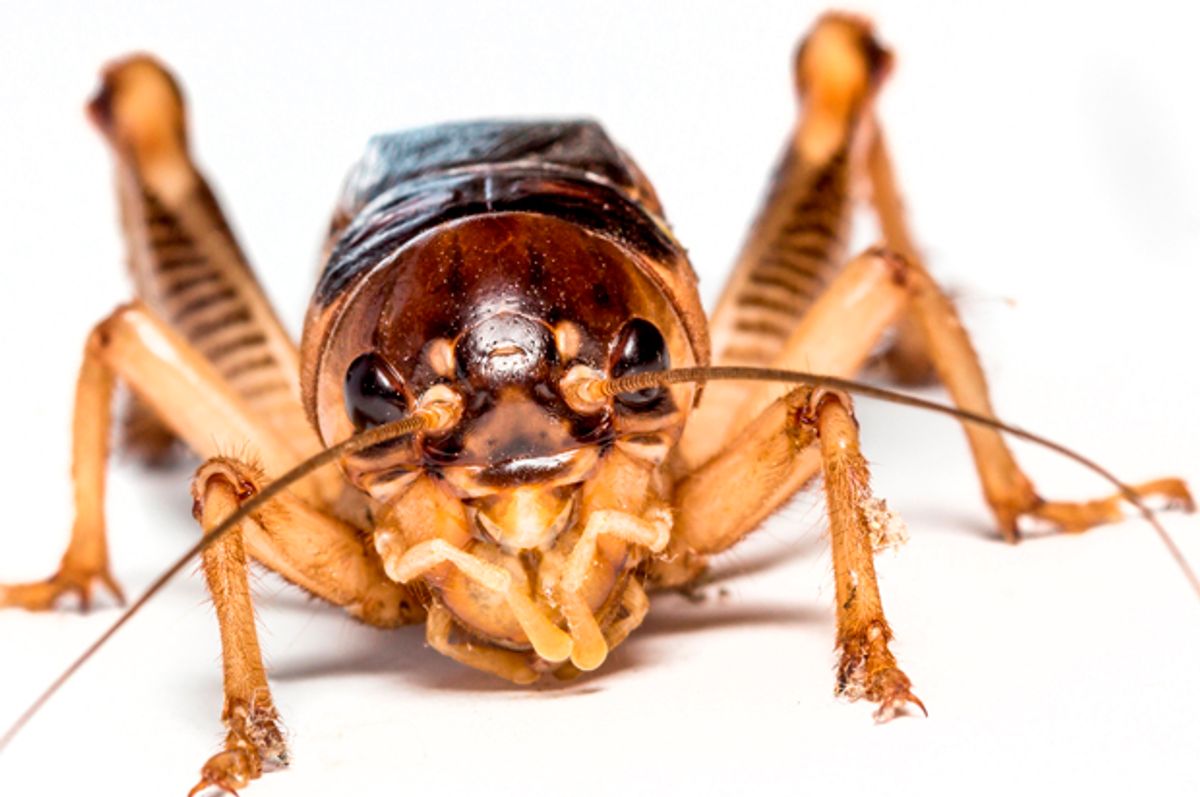 In a 2012 episode of "The Simpsons," an iron deficiency prompted Lisa Simpson to supplement her vegetarian diet with grasshoppers, but giant taunting insects infiltrated her dreams and put her off the idea. Most Americans would agree: eating bugs is the stuff of nightmares. But each year, more people — Michelin-starred chefs and suburban homemakers alike — are coming around to creepy-crawly cuisine. And as it happens, before long we may have no choice but to chow down on insects.

Entomophagy, aka the consumption of bugs, has been around in practice since prehistoric times, and indigenous populations have depended on it. Today, 2 billion people around the globe consider insects a diet staple. In China, cockroach farms are a booming business. In parts of Africa, foraging for termites to roast and fry is a common childhood chore. In the Mexican region of Taxco, the annual Jumil Festival is a boozy celebration of the stink bug, which smells like cut grass but tastes like cinnamon, and the event culminates with the crowning of a Jumil Queen.

Yet America has, for the most part, resisted bugs on our menus (native tribes relied on entomophagy, though early European immigrants looked down on the practice). The anti-bug mentality stuck, and pop culture has only reinforced our notion of insects as dirty, slimy, creepy and anything but appetizing.

Additionally, America's affluence has afforded us the privilege of a national bug aversion — meat remains our number one source of protein despite the high cost of livestock production. According to the U.S. Department of Agriculture, Americans are among the highest per capita consumers of meat in the world; we each put back an average 71 pounds of beef, pork and lamb annually.

But our dietary model is unsustainable. That’s the gist of a 2013 report from the United Nations, which determined that absent bugs, the agricultural industry cannot scale to feed a global population expected to reach nearly 10 billion people by 2050. In other words, the cost of meat will skyrocket enough to make even the wealthiest among us reconsider filet.

If insects entered the mainstream food supply, however, we could feed the world while reclaiming the 30 percent of Earth’s land currently needed for producing farm animals and their feed. Because insects are the most efficient form of protein on the planet, their production would require less water and cut global greenhouse gas emissions by 18 percent. Plus — rich in vitamins and healthy fats, and with double the protein of steak — bugs pack a greater nutritional punch than beef, pork or chicken.

So eating bugs might save the world, and we’ve got technology to make it happen. But convincing people to do it? According to a new crop of insect food startups, that’s a whole other hill of ants.

Megan Miller, former trend forecaster in the technology and media spheres and co-founder of Bitty Foods, says the key is starting with an insect that has positive connotations, like the cricket (think warm summer nights and grassy fields), and making these bugs look a lot less buggy.

“Since whole insects are a little scary and unfamiliar to most Americans, it’s important to change the form,” Miller told Salon. “We mill the crickets, which we source from organic-certified farmers, into a fine powder for incorporation into familiar foods people are already eating. Instead of focusing on the traditional demographic for cricket flour -- paleo dieters — we’re creating snacks that are more mainstream, especially for families. This is the food of the future -- we’re expecting cricket flour to reach the same market penetration as quinoa within the next five years -- so children are an important group to get on board.”

Today, Bitty Foods products, which including cookies, cricket flour and air-puffed chips called Chiridos, can be found in 100 stores throughout the U.S., alongside kale chips, chia seeds, goji berries and other aspirational foods. There is a precedent for this type of food rebrand: it took some doing to convince Americans that sushi isn’t gross, and that lobster is more of a delicacy than its pre-WWII nickname, “cockroach of the sea,” implied. Now, experts believe, bugs are next in line for an image overhaul.

“What you’re seeing are cultural forces coming together in a timely manner,” Daniella Martin, host of the online travel show "Girl Meets Bug" and author of "Edible: An Adventure Into the World of Eating Insects and The Last Great Hope to Save the Planet," told Salon. “People are much less in denial about global warming. At the same time, they’re more afraid than ever of their traditional protein sources -- mercury from fish, hormones from chicken, Mad Cow Disease from beef. Insects are seen as an untainted alternative. Then there’s foodie culture -- this constant searching for a new culinary experience.”

It’s this appetite for the exotic that’s inspired a yearly Bug-Eating Festival in Austin and given rise to a growing line of insect-centered cookbooks. It's also led the world’s leading chefs — including René Redzepi of Copenhagen's Noma and Alex Atala of São Paulo’s DOM — to bring on the bugs. Picture raw Amazonian ants perched on your coconut meringue.

But when it comes to insects entering the mainstream meal plan, cultural fashion might take a backseat to something more sensory, and obvious: taste. As a powder used in lieu of baking flour, bugs can be indetectable. Other times, they impart a nutty or earthy flavor. Some species have been likened to bacon or macaroni and cheese. Before she abandoned her iron-rich diet of bugs, even Lisa Simpson had to admit, over a bowl of beetle mash: “Mmmm, that is good grub.”