"I am a big fan of Hindu": Donald Trump's hideous love affair with Hindu nationalism

Trump's courtship of South Asians channels the ugliest, most nationalistic currents in both India and America 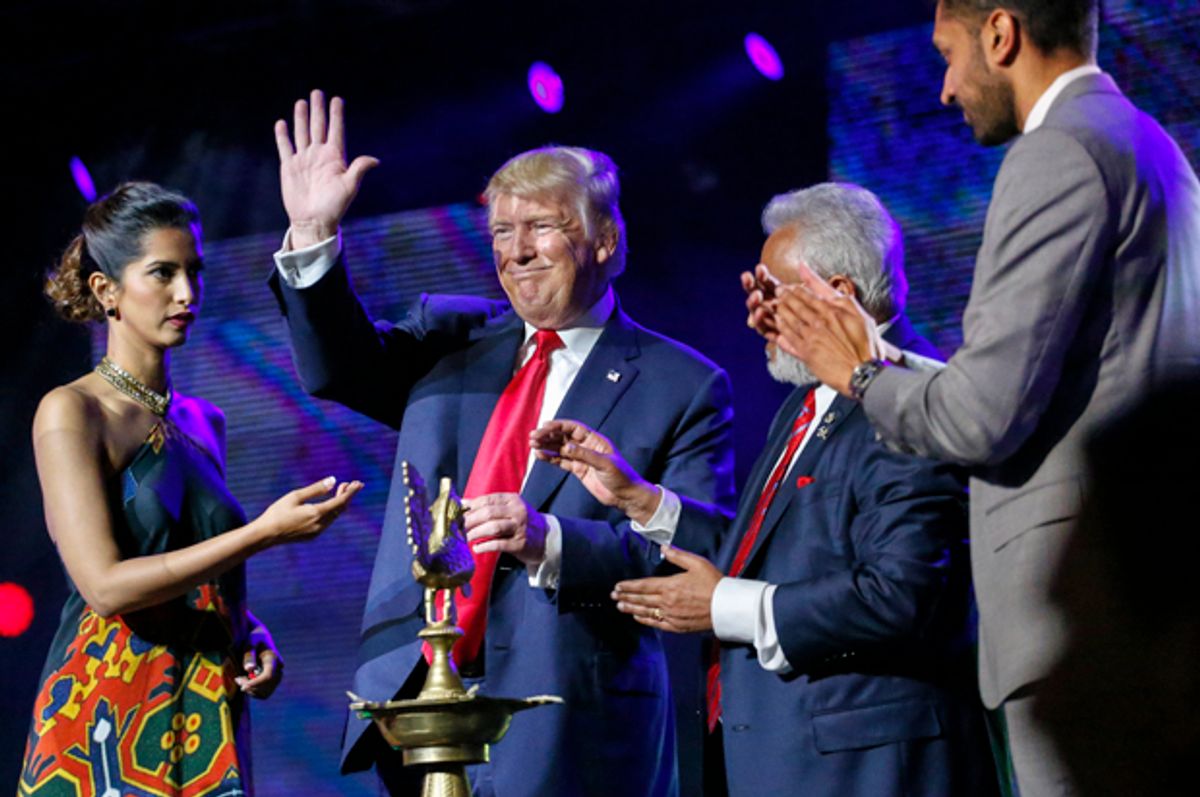 In Edison, New Jersey -- a city known for its sari shops and South Asian restaurants -- about 5,000 Indian-Americans and curious onlookers gathered for what can only be described as an unholy spectacle in which American and Hindu nationalism were on full and simultaneous display.

The event’s theme was "Humanity Against Terror," with a focus on the conflict in Kashmir. For five hours, longer than even the longest of Bollywood films, the Republican Hindu Coalition’s program entertained the audience with music and performances by Indian actors, musicians and dancers. The arena where the event was held was decorated with larger-than-life photos of Donald Trump Photoshopped onto a red, white and blue lotus. The lotus is the official symbol of India’s Bharatiya Janata Party (BJP), the party of India’s current prime minister, Narendra Modi, who is internationally recognized for crimes against humanity.

Why would Trump spend an evening in such company? The numbers may offer some insight. There are more than 4 million South Asian Americans currently living in the United States, and approximately 67 percent of them, or 2.7 million, are U.S. citizens. Additionally, South Asian-Americans are one of the most politically active ethnic blocs. During the 2012 presidential election, the turnout rate among registered Asian Indian voters was 88 percent, compared to just 58.2 percent among all eligible voters nationwide. So Trump came to Edison to sell his brand.

“If I am elected president,” Trump asserted, “the Indian and Hindu community will have a big friend in the White House.” In his remarks to the audience he made some key assumptions and rhetorical moves. He began by equating Indians with Hindus. Contrary to what Trump may believe, India is a secular democracy with more than 170 million Muslims, 28 million Christians, 21 million Sikhs and 8 million Buddhists.

Grammatical misalignment aside, Trump devoted his remarks to aligning his views on Islam and terrorism with that of India’s Hindu nationalist BJP government in general, and with Prime Minister Modi in particular. Trump said, “I look forward to working with Prime Minister Modi, who has been very energetic in reforming India’s bureaucracy. Great man, I applaud him.”

This conflation of India with Hinduism, and Islam with terrorism, is not only false but particularly dangerous for Muslims in both India and the U.S. In 2014, just hours before Modi was to arrive into the U.S. on his first trip here as prime minister, the U.S. Federal Court of the Southern District of New York issued a summons against him. The summons was issued in conjunction with a lawsuit filed by the American Justice Center, representing two plaintiffs who were survivors of the “horrific and organized violence of Gujarat 2002.” This refers to Modi's alleged involvement in the 2002 Godhra riots in his home state of Gujarat. The summons charged Modi with "crimes against humanity, extra-judicial killings, torture and inflicting mental and physical trauma on the victims, mostly from the Muslim community.”

This scrutiny was not lost at the event in Edison, where fliers portrayed the president of the Indian National Congress party, Sonia Gandhi (currently the principal opposition party to the BJP), alongside Hillary Clinton as horned demons on a “witch hunt” to “get Modi” and his party for alleged involvement in the 2002 Gujarat riots.

“We’re going to be best friends,” Trump said in Edison, talking about India’s role in the "war on terror." “We appreciate the great friend that India has been to the United States in the fight against radical Islamic terrorists.”

According to official figures, the Gujarat riots resulted in the deaths of 790 Muslims and 254 Hindus. More than 2,500 people were injured, and 223 were reported missing. Other sources have estimated that up to 2,000 Muslims died. Women were raped and children were burned alive. Muslim-owned homes and businesses were destroyed and thousands of Muslims who survived the carnage fled the state. In 2005, the State Department denied Modi a visa for his complicity in initiating and condoning the violence.

Police and government officials affiliated with the BJP allegedly directed the rioters and gave them lists of Muslim-owned properties. Since Modi took office, allegations of violence against Muslims and Dalits in India have increased. Modi’s brand of Hindu nationalism has, by many accounts, cemented caste inequality and state-sanctioned violence against non-Hindus as well as Hindus of lower castes.

Given this trajectory, it is notable that Trump named India as America’s most significant ally in his potential administration.“We will stand shoulder to shoulder with India in sharing intelligence and keeping our people safe mutually,” he said.

While polls show that Indian-Americans support Hillary Clinton in significantly larger numbers than they support Trump, his anti-Muslim, assertively nationalist message is resonating with some, particularly those who support Modi and his similar anti-bureaucratic, pro-corporate and hyper-nationalistic stance. If Americans are curious about what a Trump presidency might amount to, the intensely divisive politics of Modi and the BJP could help.

It’s important not to overemphasize the number of South Asians, particularly Indians and Hindus, who support Trump. Asian-Americans, including those of South Asian descent, are more likely to be registered Democrats and to have more progressive views on taxes, preserving the social safety net and supporting the Affordable Care Act. Many have experienced the targeting and racial profiling of their communities in the wake of 9/11 and the Patriot Act. Furthermore, the upswell of anti-immigrant rhetoric during this election cycle should make clear to many South Asian immigrants the sharp difference between Republican and Democratic voters and the parties that represent them.