Income inequality will be the biggest test for the next president 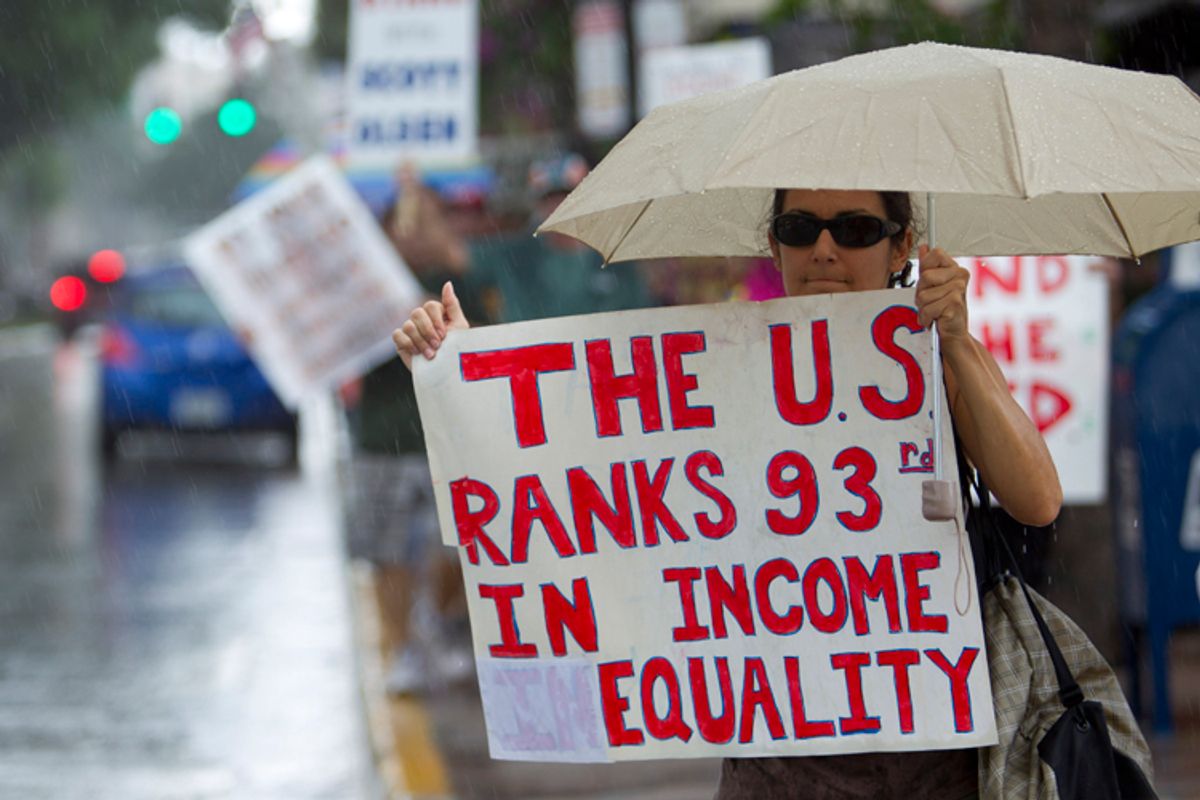 In a recent issue of The Economist, President Barack Obama set out four major economic issues that his successor must tackle. As he put it:

“… restoring faith in an economy where hardworking Americans can get ahead requires addressing four major structural challenges: boosting productivity growth, combating rising inequality, ensuring that everyone who wants a job can get one and building a resilient economy that’s primed for future growth.”

It’s hard to quibble with the items on the president’s list. Slow productivity growth, rising inequality, inadequate employment and the lack of sustainable economic growth all are important problems that a President Clinton or Trump will have to face.

But just how important are these issues? Does one, above all, deserve to be at the top of the next president’s economic to-do list?

Rather than rank these items, it is probably better to follow the advice of American theologian Reinhold Niebuhr’s serenity prayer: We should courageously change what we can while accepting what we cannot.

And inequality is the only item on that list that a president can influence in a significant way. It also happens to be, in my mind, the most important one – critical for solving the other three problems as well as preventing the disappearance of the middle class.

The problem of inequality

A glimpse of the latest data shows clearly why reducing the gap between the richest and poorest Americans should be presidential priority number one. It’s been widening for decades.

For example, research by the French economist Thomas Piketty showed that the top 1 percent of U.S. households received more than a fifth of all U.S. income in 2013, compared with less than a tenth in the late 1970s and early ‘80’s. Back then, trickle-down economics was coming into vogue. But as it turns out, the extra income going to the top 1 percent did not trickle down to the other 99 percent; all the gains went to the top of the distributional pyramid – and then some.

My own work on inequality has focused on the size of the middle class in nine developed nations. According to the ancient Greek philosopher Aristotle, a thriving middle class is critical for a democratic society. It also provides a buffer between the rich and the poor, thus mitigating the class struggle that Karl Marx predicted would destroy capitalism.

Besides having the smallest middle class of the nine countries I study, the U.S. also experienced the sharpest decline in its size over the past several decades. The U.S. middle class shrank from 58.3 percent of all households in the '70s to only 50 percent in 2013.

Why does it matter if the rich are getting richer and the poor poorer? Not only is greater inequality a threat to our democratic capitalist society, it’s bad for the economy and causes a whole host of other problems – including other items on the president’s list.

Since the rich save more, whenever they receive more income, total consumer spending tends to fall and unemployment rises. This lowers economic growth, reduces government tax revenues and makes it harder to solve other economic and social problems.

And as the wealthy earn more and need to find a place to invest or park their excess cash, financial institutions tend to take more aggressive risks to boost returns for their investors in order to avoid losing those savings to a competitor. Increased risk-taking is what led to the global economic meltdown in 2008.

Furthermore, households have many fixed expenses. When their income falls, people must borrow in order to pay their monthly bills. This process, however, is not sustainable; at some point debt repayments will exceed the ability of people to repay, causing credit to dry up. As a result, people risk losing their homes and their ability to pay for basic necessities.

Too much inequality also has negative consequences for our health. As British epidemiologists Richard Wilkinson and Kate Pickett document in their book, “The Spirit Level,” a great deal of evidence shows that inequality is associated with health problems (such as obesity, infant mortality and lower life expectancy) as well as social problems like crime and addiction.

Finally, inequality makes it easier for the very rich to affect political outcomes through campaign contributions and lobbying. Coming full circle, this makes it more difficult to solve the inequality problem through government tax and spending policies.

The challenge of our time

The good news is that the next president can do things that would directly help solve the inequality problem. Some solutions he or she can pursue alone; others will require the cooperation of Congress.

First some direct actions. The U.S. government purchases goods and services from many businesses and must decide whom to hire for this. If government policy favors companies that provide better pay to average workers – or that have lower ratios of CEO pay to average pay – the president can help increase the income of many Americans.

To take one recent example of this, in September the president signed an executive order that increased the minimum wage to US$10.20 for workers who are getting paid under a federal contract. The next president can increase this even more and can require greater employment benefits for contract workers. These income and benefit gains will be replicated elsewhere in the workforce.

Support from Congress, however, would be necessary to raise the minimum wage for all workers, which has been stuck at $7.25 since 2009 and has been falling (in real inflation-adjusted terms) ever since.

Also with the help of Congress, the next president could employ both tax and spending policies to reduce income inequality. As my study shows, such policies are major determinants of the size of the middle class across nations.

And cross-national data show that top tax rates and income inequality are highly correlated. Sharp cuts in the top rates in the 1980s explains why inequality has gotten so much worse since then.

Evidence from our own country and from other countries shows that good policies and programs do make a difference. Inequality reached a low point in the U.S. after World War II when taxes were high, labor unions were strong and the New Deal provided a strong safety net to average Americans. And other developed nations, such as France and Norway, with more programs and stronger programs to support middle-class and lower-income workers have not experienced the same surge in inequality that we’ve had in the U.S. Some of these programs include paid family leave, more robust unemployment compensation, health care for all and higher minimum wages.

Beyond a president’s control

While President Obama’s other concerns are important, unfortunately they are beyond the control of the Oval Office.

William Baumol has argued that productivity inevitably grows more slowly in a service economy. His famous example concerns a Mozart horn quintet. Unlike manufacturing, you can’t improve productivity here by using capital equipment to reduce the number of musicians, for then it is no longer a horn quintet. Playing the piece faster won’t help either – the piece was written to be performed at a certain pace.

In “The Rise and Fall of American Growth,” Northwestern’s Robert Gordon contends that we have reached the end of the Industrial Revolution. All the big discoveries and innovations that can improve productivity growth have already been made. Therefore, we must expect slower productivity growth in the future.

Increasing the number of good jobs is likewise difficult. Other than government employment, most jobs are created by the private sector, and the government cannot mandate that firms hire more workers. The federal government can only spend money to create jobs, but this does not mean that those jobs will be good jobs.

The biggest economic challenge facing the winner of the Nov. 8 election will be to grapple with the scourge of rising inequality in the face of great resistance from some of the richest and most powerful citizens.

Few economic issues are as important as inequality is the source of so many other problems the U.S. faces – and thus essential to their solution.

This is more than just an economic issue. Less income polarization could reduce some of the political polarization that has increased along with rising income inequality since the 1980s, and has led to a degenerative presidential campaign this year. As focus has shifted to the moral failings of both candidates, the real issues at stake are being ignored – especially inequality, which also happens to be the cause of so many of the anxieties being expressed by voters.

Dealing with the problem of inequality will actually make America great, rather than simply irate.