WATCH: Killing the Trump within: White dudes, it's time to summon your inner Skywalker! 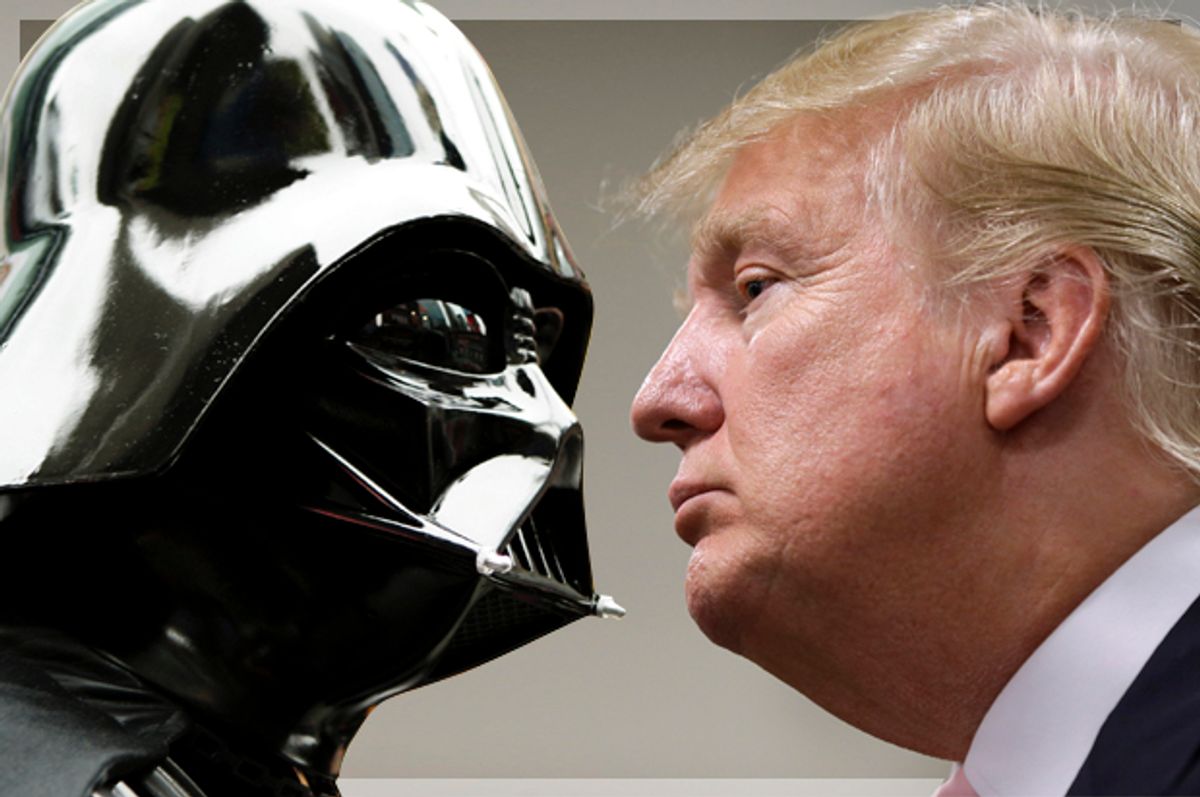 Remember that scene in “The Empire Strikes Back” where Luke Skywalker fights with a simulated Darth Vader, cuts off the villain’s head, and finds his own face inside the helmet?

I’ve been feeling that a lot lately watching Donald Trump, who is, as of this writing, still the Republican nominee for president. He is such a virulent example of white American masculinity that it can be easy for all of us less blustery and ostentatious types to distance ourselves from him. He is everything we hate, it is true, but partly because we recognize all our own worst qualities in him.

Donald Trump is, in effect, white privilege and patriarchy embodied. He is us, white dudes, whether or not we want to admit it. He is our sense of entitlement incarnate. Sometimes, when I hear him rambling on in an argument, attacking people rather than making points, sinking to the lowest common denominator, I hear myself.

I often think of talking as competition rather than conversation and, sometimes, I am “that guy.” I like to argue and once I get started it doesn’t matter who is actually right. I am not listening. I am going to win.

I sometimes talk over my wife in the same way Trump tries to talk over Clinton (and she usually handles my blustering idiocy with the same aplomb as Clinton does Trump’s).

Of course, over the last couple of week we've seen the “Access Hollywood” footage and the far worse ways that Trump talks about women when they aren’t present. But we knew this, or could have known it, all along. No, despite what some Republican apologists say, most men do not openly brag about sexual assault in locker rooms or even frat houses. But we are all raised in a toxic masculine culture that constantly demeans women by teaching us not to consider them as important as we are. It teaches us that our lives are movies and we should be the main characters while everyone else is somehow subservient to our story, especially women.

And when we hit puberty and part of that movie inevitably turns to porn, we still think it is all about us. I cringe with horror when I think of the way I thought about girls when I was in grade school. I didn’t even understand anything about sex — as it seems that Trump still does not — but its very existence somehow turned women and girls more into targets or trophies than into potential collaborators in an adventure. Whether or not girls liked you and “how far they let you get” was a reflection on your status as a man as much as a legitimate human relationship. It is not that many steps from there to Trump, and I learned that before middle school.

I am deeply embarrassed by and ashamed of my thoughts and behavior — I remember teasing a girl whose breasts developed early and can’t believe how horrible I was — and yet that monster, though improved, is not dead. Every one of the millions of stories of being grabbed, groped and assaulted that have come pouring forth over the past few weeks also has a man behind it. All of that is not Donald Trump. It is all of us. I first pinched a girl’s butt in the fifth grade. I did not have her consent. I am sorry.

And of course, we’ve known all of this and we should have been listening to women more all along. But the truth is, we haven’t been. At least now we have in Donald Trump the form of all of our unconscious bias made manifest.

The unconscious, institutional bias has now taken the form of a mythological monster so that we can see clearly what it looks like. And it should make white men, even progressives and feminists and nice guys, terrified. As a monster, Trump is like the antihero who lacks all self-awareness and thinks himself a hero — Steve Carell’s Michael Scott on “The Office” or Danny McBride’s Kenny Powers from “Eastbound and Down.”

These characters are funny, and tragic, because of the depth of the gulf between who they really are and who they think they are. This is why they are also terrifying. Because they tell us that we also might not be the people we would like to think we are. When I first saw “The Office” I was terrified by the thought that maybe I only thought I was good at my job while I was actually terrible (I was a teacher then, and increasingly I think that fear was correct). But now I am even more scared that I am actually like the Donald and just don’t know it.

In Plato’s dialogues, Socrates often makes the same point when he says that “no one does wrong willingly.” We always aim for the good, Socrates argues; we just think the wrong things are good. We don’t adequately know ourselves and our own positions. Socrates realized this, which is why he spent his life asking questions of others -- trying to break out of his own limited perspective and see the truth.

Just as the figure of the tyrant offered Plato a perfect model for what can happen to us if we don’t struggle to root out all our internal and unknown biases, Trump offers us — everyone, but especially white men — that opportunity. We can use him to confront the ugliest parts of ourselves. We can see his self-importance as part of his refusal to listen to others and we can become better. We can try to upend our own sense of self-importance and listen to others. We can see the way he makes everything about himself and stop and recalculate our own thought processes. We can recognize that justice is not only that which benefits us. We can see the way he treats other people and hold it up as a talisman against all of those needy, selfish, stingy, spoiled, arrogant, sexist, racist, homophobic, xenophobic, idiotic aspects of ourselves that we carry around each day.

If Trump loses to Clinton, maybe she is the Yoda who helped us see our own true selves. But it's up to us to kill the Trump within.