Donald Trump shows signs of surrender in Virginia: Fear and losing on the campaign trail

Speaking to resigned loyalists at Regent University, Trump showed his campaign is the grift that keeps on grifting 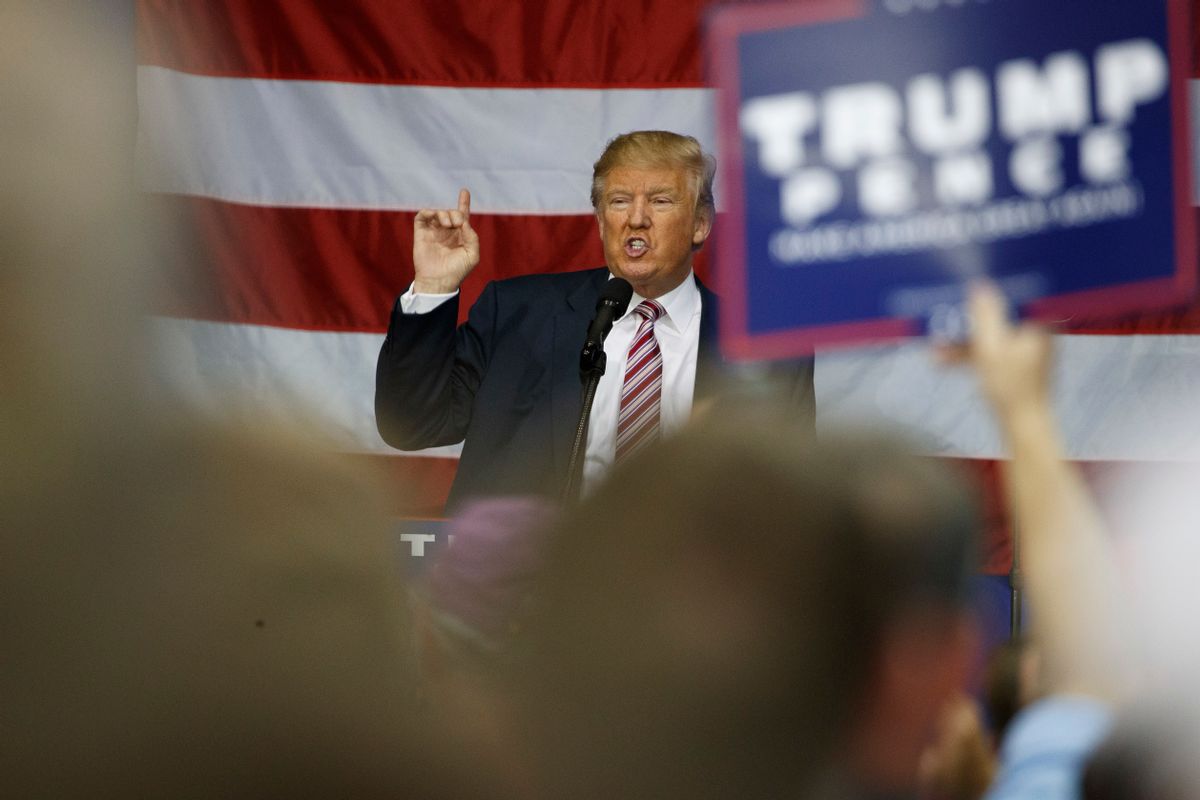 The two young men wearing rubber Donald Trump and Hillary Clinton masks — the "Trump" is dressed in a business suit and "Clinton" in a striped prison uniform like a member of a 1930s chain gang — are posing for pictures with attendees from the Trump rally at Regent University campus of Virginia Beach. They tell me their names are Brendan and Taylor and they live in Norfolk and work on “the military base.”

The phrasing seems weird — most people around here would tell you which of the multiple military bases in the area they work on — but new people keep coming up to ask for pictures, so I have only a second to ask my one question.

“Do you think Trump’s going to pull it off in Virginia?”

There is a pause that seems to stretch out. "Trump" — I have already forgotten if he is Brendan or Taylor -- has turned away, distracted by other rally attendees calling to him. The eyes of "Clinton"-whom-I-think-is-Taylor might be narrowing behind the mask, or maybe it’s my imagination.

“Uh, I sure hope so,” he says in a voice that sounds very, very unsure, before turning to join his partner in throwing a thumbs-up at the cellphone cameras pointed at them.

That pause says it all. A pause followed by some resigned version of “I sure hope so” is the standard from everyone I put the question to over the course of Saturday afternoon: The two Regent students whooping in my ear every time one of the rally’s warm-up speakers throws out right-wing red meat about abortion or guns or religious freedom (that last one plays very well at Regent, a college founded by televangelist Pat Robertson); the four middle-aged blonde women holding pink "Women for Trump" signs and grumbling about how Clinton cheated in the Democratic primary debates by getting the questions ahead of time; and many others. They are all voting for Trump, but they all paused when asked if they think Trump can win Virginia, where he is trailing by double digits in the polls. Then they gave some variation of Taylor’s answer and went back to waving signs and grumbling.

Talk about a “rigged” election enough, as Trump has done for weeks, and even your diehard fans will begin thinking that voting isn’t worth the effort. Maybe that was why Saturday felt like a carnival on its last night, just before the lights go out and the carnies strike the midway, throw everything on their trucks and set out for the next town down the road, not to be seen back in these parts for a while. So the townspeople have shown up for one last cloud of cotton candy and ride on the Tilt-A-Whirl.

Though this being a Trump event, it’s more like a collective airing of grievances, the Festivus of political campaigns. So the crowd cheered for the warm-up speakers who talked about Second Amendment rights and religious freedom. They cheered when a Virginia gubernatorial candidate tried to rally them with a tale of Confederate heroism during the Battle of the Wilderness in the Civil War. They cheered when Rudy Giuliani showed up to snarl and froth about the Clintons.

Trump himself seemed downright muted when he finally took the stage. He didn’t mention the sexual assault allegations against him, as he had at that morning's disgraceful address in Gettysburg. Instead Trump made the usual promises about stopping immigration, building a wall, repealing Obamacare and renegotiating bad trade deals. There were bog-standard references to Clinton “bleaching” her emails and being a crook. There was some region-specific pandering — promises to the evangelicals to repeal the Johnson Amendment and promises to build a 350-ship naval fleet, which would bring lots of work to local shipyards — but otherwise it was low-energy Trump. Bemasked Brendan (I think it was him) made a more animated "Trump."

But there was no mistaking that, no matter what promises Trump made his fans, this whole campaign is still all about Trump. He bragged about how he didn’t have to run for president and how hard it has been. He told the crowd, “Get out and vote. Otherwise the movement comes to an end.” Nothing about continuing to fight for people or the issues after November 8. Nothing about helping the Republican Party fight the Clinton agenda.

Because the greatest tragedy for Trump is not what happens to the country. The greatest tragedy is that Donald Trump will have lost at something. Which made me wonder if the small but steady stream of departing rally-goers who began melting away early in his speech and didn’t stop had finally figured out that they have been suckered. After a year and a half of promising he would fight to save them, in the last weeks of his losing campaign he is now explicitly saying he will abandon them and their “movement of deplorables” as soon as the race gets called for his opponent.

Because the minute Donald Trump has sucked enough attention and money out of people’s pockets, they are of no more use to him. It has been a theme throughout his adult life. The fans who have gotten him this far are just the latest victims of his grift. As the campaign limps to the finish line, just two short weeks away, some of those Trump loyalists are just now coming to terms with that fact.