Yes, Trump has been finally been undone by his own vileness. But don't overlook the woman who's kicking his butt 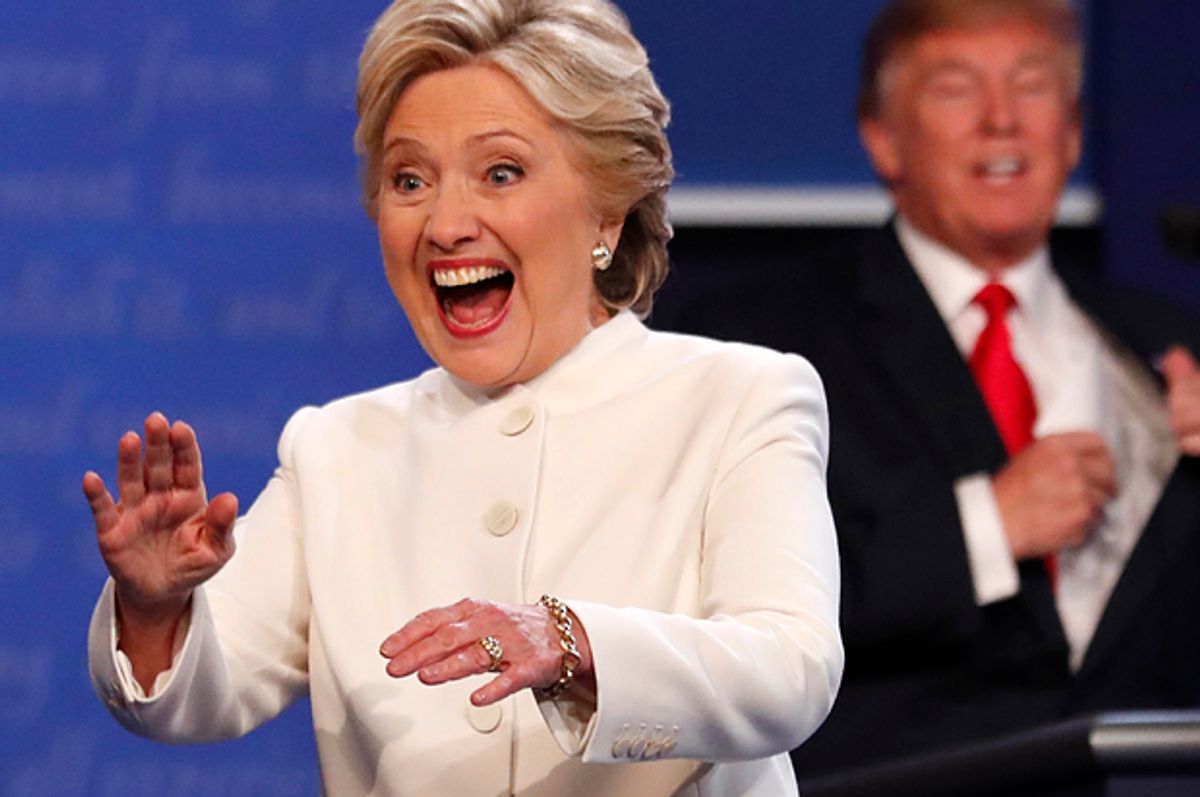 The latest polls are looking good for Hillary Clinton and increasingly so for Democrats further down on the ballot. The ABC tracking poll, which Nate Silver designates as A plus, was released on Sunday, showing Clinton with a 12-point lead over Trump. That's a bigger lead than in most other polls but the averages across the board have her percentage up by a comfortable margin that seems to be increasing.

Silver of FiveThirtyEight.com has laid out four possible outcomes to the race at this point, with all but one featuring a Clinton win:

A Trump win, including cases where he loses the popular vote but wins the Electoral College.

Finally, a Clinton blowout, wherein she wins the popular vote by 8 points or more, which would almost certainly also yield a dominant performance in the Electoral College.

FiveThirtyEight's model, which averages polls, shows that Clinton has an 85 percent probability of winning and is currently ahead by 6.6 points.

For its part, The New York Times Upshot has a 92 percent probability of a Clinton win and shows see side-by-side comparisons of all the predictions. They all have Clinton with 85 percent or higher. Using its customary metaphor, the Upshot compares the chances of Clinton losing "to the probability that an NFL kicker misses a 29-yard field goal." That indeed happens (in fact, it happened on Sunday night) so Democrats should not get complacent.

And for down ballot races? Well, there always has been a decent possibility that the Democrats would win the Senate if they retain the White House, simply because this is a cycle when Republicans are defending more seats. Still, that outcome is anything but assured, and some analysts are insisting (without evidence) that this year will feature lots of ticket splitting (that is, people who vote for Clinton but also vote for a Republican incumbent senator, for example).

Still, this cycle is nothing if not unpredictable, so who knows?

Democrats had written off the House from the beginning: GOP gerrymandering all over the country makes it nearly impossible for Democrats to win a majority in the House until another round of redistricting after the 2020 census. Still, the possibility, however remote, is starting to be discussed.

I estimate that Democrats must win the national popular vote by 8% to have any chance at taking control of the House. This large margin is driven by two major factors in equal measure: gerrymandering to pack Democrats into districts, and population patterns which they pack themselves. Therefore the magic number for House Democrats is a Clinton win by 8%. In national polls Clinton is currently ahead by 5% (7 polls starting on October 10th or later), and Obama outperformed his 2012 polls by 3%, so it’s not crazy to imagine. I’d give the House Democrats a 1 in 5 chance of making it over this bar. A long shot . . . but not a crazy long shot.

So what's happening to make this dramatic shift in October? Clinton had been leading throughout the summer, but on Sept. 26, the day of the first debate, FiveThirtyEight had Donald Trump with a 51 percent chance of winning. The candidates were tied nationally at 45 percent, and the trend was moving in his favor.

The obvious answer is that Trump blew it when he made a fool of himself in the aftermath of the first debate with his 3 a.m. tweets about the former Miss Universe. Since then he has been accused by a dozen women of groping and assaulting them against their will. That "Access Hollywood" tape was a shocker. Most observers see the huge and growing gender gap as a result of all that grossness.

But something else happened as well. For about a month before that first debate the right-wing media and people in or around the Trump campaign had been spreading spurious rumors that Clinton had brain damage or Parkinson's disease. This was barely covered in the mainstream media, but everyone in the media pays attention to Matt Drudge, who had been relentless with the story, so they were very much aware of such rumors.

When Clinton had her fainting spell at the 9/11 ceremony in New York, the press spent days feigning anger about her failure to keep them properly informed about the details of her doctor's appointments and diagnosis. (That's despite campaign professionals saying they would never inform the press of anything like that, mainly because such illnesses are so common on the trail.)

Unfortunately for Clinton, the combined effect of the right's relentless smears about some kind of disqualifying terminal illness and the press fulminating for days over her pneumonia advanced the idea that she lacked the "strength and stamina" required for the job. Coincidentally or otherwise, this was the very charge that Trump had been making for months. By the time of the first debate in late September Clinton had been off the trail for quite a bit, first recovering from her pneumonia and then doing debate prep, with Trump nipping at her heels.

When she showed up looking very healthy, sharp and aggressive, it changed the narrative overnight. Indeed, her ability to bait him into misbehavior had her dominating that debate from beginning to end, when she hit him with the Alicia Machado story that had him reeling for days afterward.

So it's true that Trump's poll numbers have been cratering for a month now, pointing to what may be a catastrophic loss for the Republicans. Much of that happened because of revelations about Trump's horrifying misogyny and his ongoing inability to behave with any discipline.

But it's a mistake to discount the huge effect of the debates, well beyond Trump's predictably ridiculous performance. These were the first occasions since the Benghazi hearings for people to see what Clinton is made of, and it reminded them of the characteristics that make her a formidable leader. When she stood there, face-to-face with Trump, it was clear that one of them was a president. And it wasn't him.