On Halloween, nothing is sacred: A field guide to the election year's hottest costumes

Halloween is always a time for outrageous costumes informed by the news. But every 4 years, we crank it up a notch 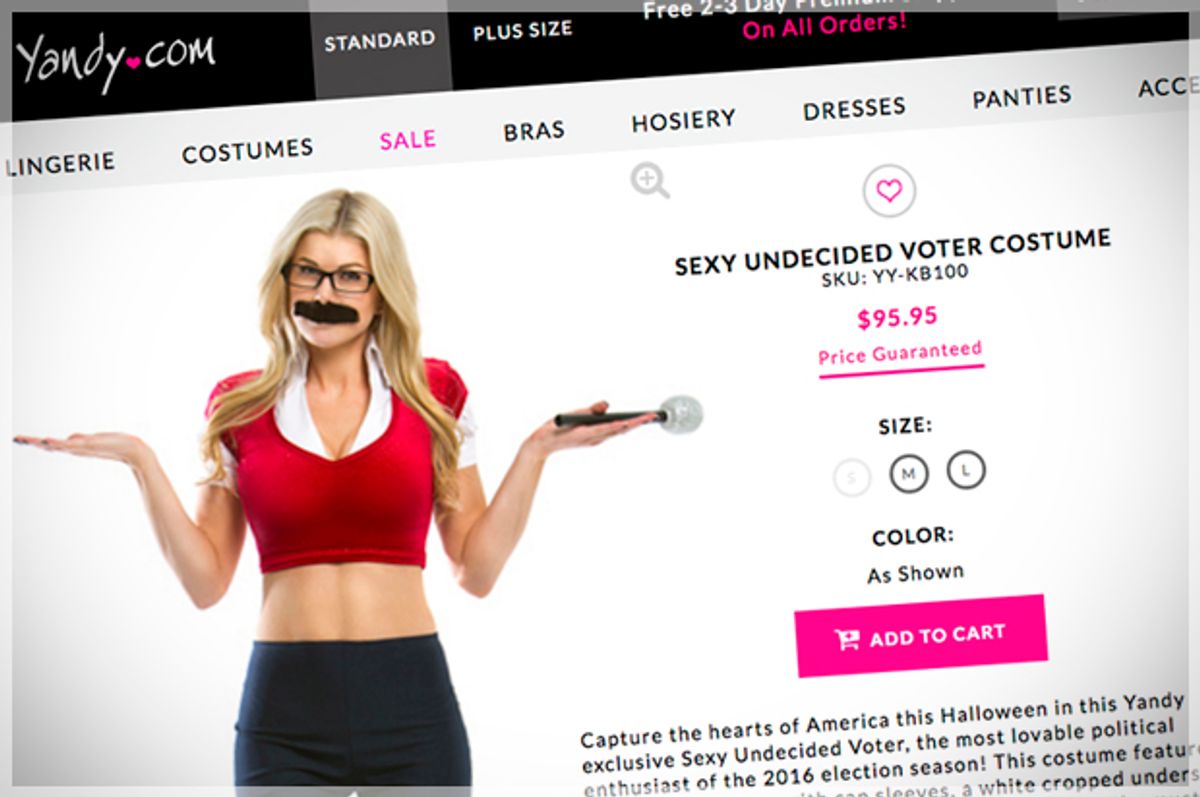 It was October of 1993. My boyfriend and I were on a downtown A train in New York, returning home from a party. He wore boxer shorts splattered with blood. I believe I had on lingerie, carried a knife and held a severed piece of male genitalia. Some young African-American men, spotting us, looked concerned. They approached, with one of them saying, “Oh, bro. We gotta get you to a hospital!” They thought he was truly injured.

Their kindness didn’t go unnoticed, but the only emergency was our lost sense of propriety. We were wearing John and Lorena Bobbitt costumes. It was Halloween night, the one evening in America where year upon year, nothing is sacred or too inappropriate.

Halloween, a holiday with pagan origins, invites all sorts of mischief. The year I dressed up as Mrs. Bobbitt, the story of husband John Bobbitt and his wife Lorena — who had not taken kindly to his philandering and had hacked off his penis with a knife, some will recall — was big news, played for broad late-night laughs before becoming a cautionary tale about domestic violence. It was also a different era, pre-9/11, when you could actually board a New York subway train with an unconcealed steak knife.

Sometimes, manufacturers try to go with the times and it falls flat. Last year, Costumish.com listed a Dr. Walter Palmer costume for $59.99, complete with the head of Cecil the Lion, spattered blood, and dental instruments. Not one sold, according to TMZ. More recently, Costumish pulled this year’s Kim Kardashian gagged-and-bound robbery costume after public outcry.

There are also those costumes that are downright dangerous and demented, which can cause legitimate fear and anger because they exploit terrorism or violent events from the news. Masks of any violent nature, along with weapons (naturally), are banned from my daughter’s school Halloween parade. Now that people in clown costumes are running around engaging in mischief or worse apart from on Halloween, some communities are on edge and might not distinguish between harmless fun and fearmongering.

Every year, there's a new round of the usual tastelessness, too, often in the form of culturally insensitive costumes. Remember back in 2007, when Immigration and Customs Enforcement Secretary Julie Myers was trashed for giving a “best costume” award at the ICE Halloween party to an "escaped Jamaican prisoner" who wore dreadlocks and appeared in blackface? No words for that one.

Why do so many people go to extremes on Halloween? Because it’s the one night a year you can be anyone you want, even if it’s inappropriate. At least, no one will fault you for wearing underwear on the subway. (Blackface costumes are another story.) For as long as Halloween has been celebrated, it has given people the excuse to don something they could never wear or to be someone they normally couldn’t be without judgment.

Halloween also swings with the times: In election years, political costumes are the rage. They are on trend, and large retailers like Spirit Halloween, the biggest seller of Halloween costumes in the United States, stock many more of those garish, sneering rubber Trump and Clinton masks than others. In the '70s, it was "Dead Presidents"-style Nixon masks.

The '80s twice over saw thousands of Reagans on Halloween, and in ’92 there were more Bill Clintons than you could shake a stick at. This year we might revisit Bill Clinton, along with the women who have accused him of sexual misconduct in the past, who are back in the spotlight after meeting with Donald Trump before the second presidential debate.

In 2013, Walmart and other retailers were selling a demented-looking Toronto Mayor Rob Ford rubber mask, made to resemble his face high on crack. The mask is like a train wreck; you can’t look away. The Huffington Post reported in August 2014 that Ford masks were outselling those of Sarah Palin and President Barack Obama. Two years later, they are having a renaissance, likely because Ford recently died, making the costume even more tasteless.

Looking for some creative ideas outside of the usual Hillarys and Donalds? The Washington Post came up with an exhaustive list, some of which are downright genius. My favorite? A “basket of deplorables.”

Sometimes, a mask is just a mask. Other times, it’s an exaggerated way to express our political opinions. Hate Hillary? Wear a costume that demeans her. Tired of Trump? Wear him, like Melania Trump look-alike British journalist Jemima Khan recently did at an event, when she showed up wearing a Trump doll over her shoulder that groped her. Kirk also carried a Trump-Pence sign that reminded people to vote on Nov. 28, a dig at Donald Trump’s misidentification of Election Day.

Will you wear your opinions this year on Halloween?