One of the looniest conspiracy theories of all holds a key to right-wing hatred of Hillary Clinton: It's Treegate! 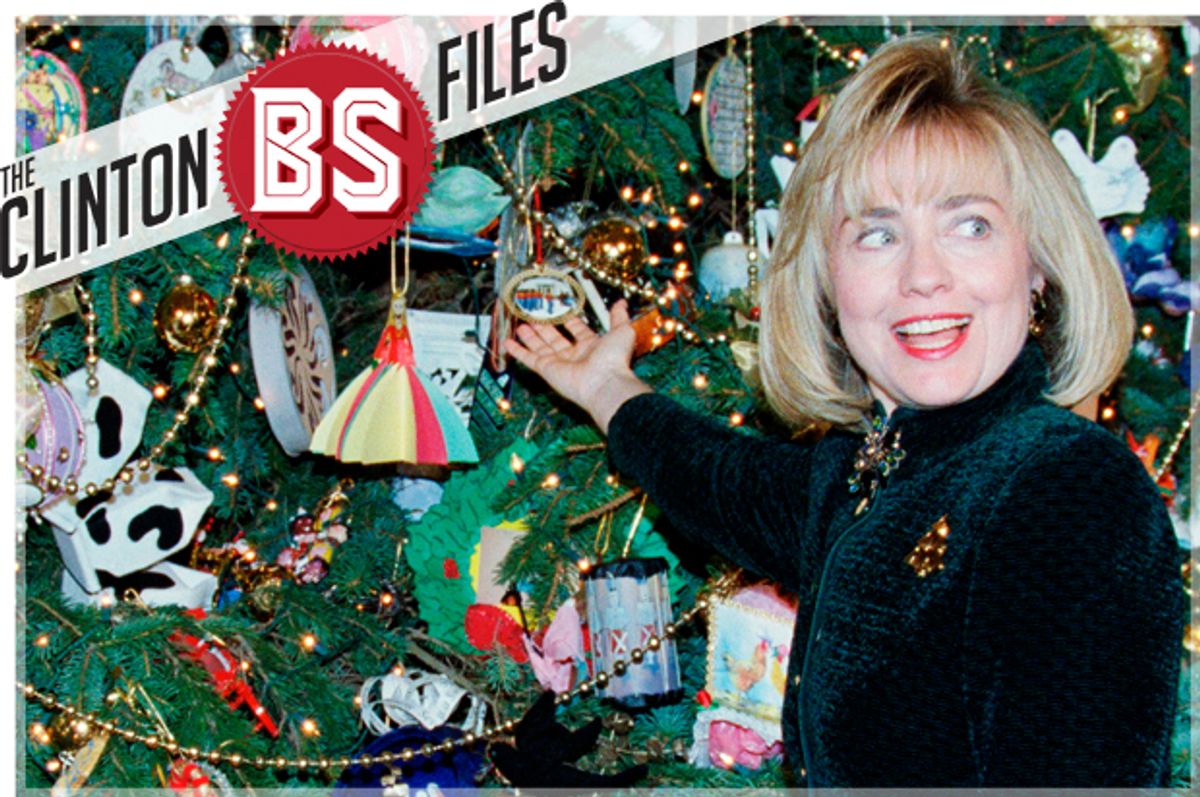 At Wednesday night's debate, Donald Trump, frustrated by once again being so easily defeated by Hillary Clinton, cracked and called her a "nasty woman." A deeply strange moment was made even stranger by the off-kilter use of the word "nasty." It wasn't Clinton, after all, who had to stand there and defend herself against allegations of grabbing people's genitals against their will and bragging about it afterwards.

But it's never been enough for Clinton detractors to bag on her for being ambitious, smart and feminist — all qualities they barely conceal their loathing for, especially in a woman. No, in the fever dreams of the right-wing imagination, Clinton is frequently portrayed as downright nasty, a gross person who likes gross things, the grosser the better.

And a critical piece of evidence that the conspiracy-theory right has for this theory is the claim that, in 1994, First Lady Hillary Clinton decorated the White House Christmas tree with condoms, cock rings and syringes.

For context, it's important to remember that the paranoid right is absolutely obsessed with painting Clinton as some kind of sexual deviant. In some cases, she's accused of simple lesbianism, which, in certain corners of the right, is still regarded as some kind of out-there kink.

But some conspiracy theorists, realizing that simply being gay is hardly considered deviant behavior in our enlightened times, juice up the tales of Clintonian perversion: Cuckoldry, multiple affairs with various men at once, a lesbian entanglement with a woman accused of being in the thrall of the Muslim brotherhood, "sexual paganization."

While most urban legends about the Clintons start somewhat small and then grow in the telling, this one appears to have sprung fully formed from the deranged imagination of Gary Aldrich, a former FBI agent who worked on the security team for the Bush and Clinton White Houses. Aldrich had an unending contempt for the Clintons, who he clearly viewed as a couple of dirty hippies with their Fleetwood Mac records and daughter named after a Joni Mitchell song. After he left, he decided to cash in on that hatred with a 1996 book entitled "Unlimited Access: An FBI Agent Inside the Clinton White House."

Unlike some Clinton haters of the era, Aldrich seems to have realized that accusations don't need to be plausible in order for them to be eagerly snatched up and believed by huge swaths of the conservative book-buying public. So he went hog-wild in his book, claiming that Hillary Clinton's Christmas decorating team decided to deck the tree with drug paraphernalia, condoms and cock rings.

Aldrich goes on at length about what is clearly an event that happened only in his head, but I've clipped some highlights from the book for your perusal.

Clinton is far from the only target in this. Aldrich also takes a swipe at gay men in an unsubtle passage about a male florist.

To be fair, some of the ornaments Aldrich describes could have plausibly made their way onto the White House Christmas tree. For instance, he writes that several of the ornaments were birds who were wearing "dark glasses and were blowing saxophones."

But even these innocent-sounding ornaments offend Aldrich's delicate sensibilities. "So many of the ornaments didn't celebrate Christmas as much as they celebrated sex, drugs, and rock and roll," he writes. The horror!

This bizarre fantasy makes a little more sense in the context of the '90s. Back then, it was trendy in right-wing circles to demagogue about how contemporary art was a racket to funnel taxpayer money to perverts and deviants. Right-wing media and politicians like Rudy Giuliani, then the mayor of New York, threw fits over artists like Robert Mapplethorpe or Andres Serrano, who made edgy pieces with themes of sex, violence and religion.

Clinton's idea for decorating the Blue Room Christmas tree was to put out a call for American artists to contribute their artistic creations to the tree. Pair that with the reactionary myths painting all modern art as politically and sexually provocative, and next thing you know, a myth is spreading that those damn hippies in the White House are hanging condom art on a Christmas tree.

Of course, there's nothing to it. The White House unveils the annual Christmas decorations with quite a bit of pomp, and journalists from major newspapers and other outlets come join the festivities. Marian Burros of the New York Times was there and didn't seem to notice these supposedly scandalous ornaments. Photos were taken, which can easily be found today, and there's nary a penis or syringe in sight. Or perhaps you could employ some common sense and realize that there's no reason on earth that the Clintons would do such a thing.

This particular conspiracy theory lost some steam after the Clintons left the White House, though it still pops up on right-wing forums and blogs periodically. But expect there to be some kind of Christmas tree-related controversy to be ginned up in 2017, when the Clintons are once again tasked with decorating the Blue Room Christmas tree — presumably with Bill instead of Hillary at the helm this time.

After all, Christmas is a red hot button for the culture warriors of the right, who are forever floating urban legends about nefarious liberals trying to take Christmas away for good. The Obama White House had its fair share of Christmas-related conspiracy theories, as well, such as email forwards claiming the Obama family was calling the tree a "holiday tree," presumably as part of the president's secret Muslim agenda. Rudolph only knows what they'll come up with when Santa comes for a second Clinton administration.