The power of unhappy endings: “Black Mirror” finds hope in the darkness

Freed of the imperative to give its characters pleasant closure, Netflix's digital-dystopia anthology series scores 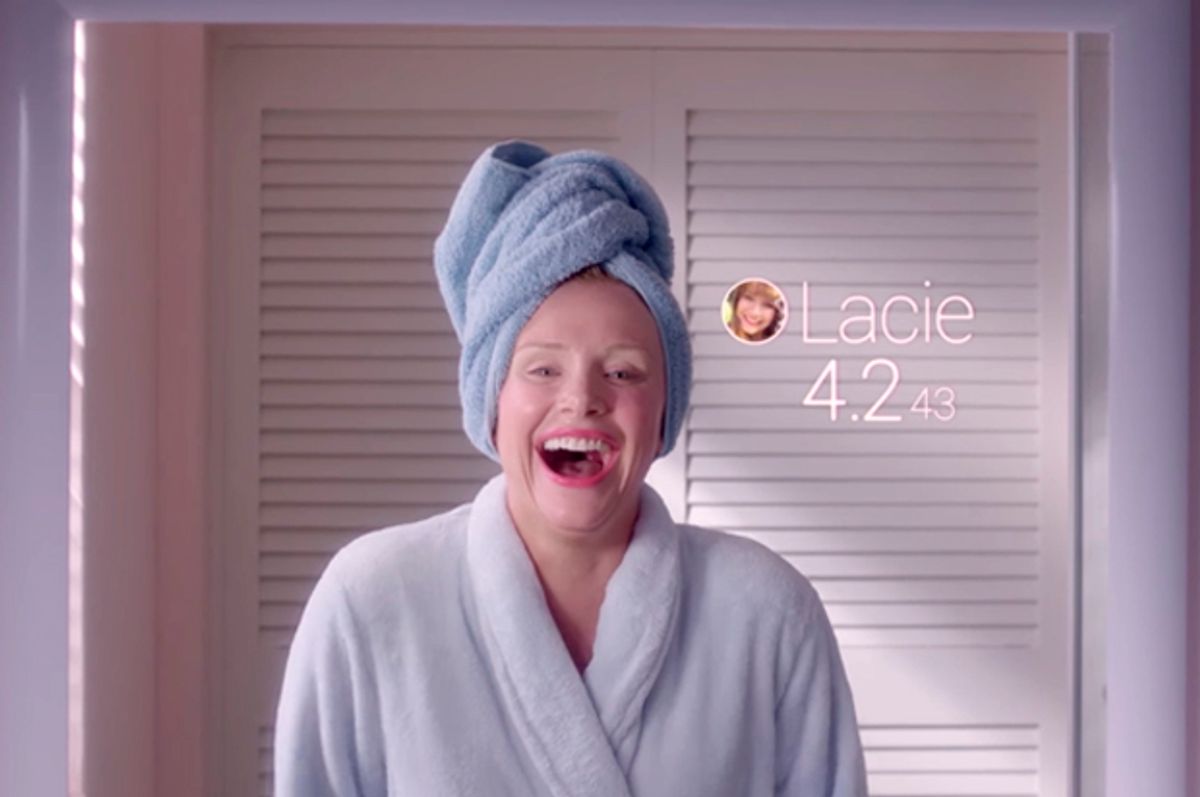 Spoilers ahead for the new season of "Black Mirror."

Lacie Pound (Bryce Dallas Howard) has lost everything. On the way to her childhood best friend’s wedding, her flight is canceled. All the other flights that would get Lacie to her destination are booked up. She has to take a rental car and drive through the night to get there on time.

After her car breaks down, Lacie has to hitchhike with a truck driver (Cherry Jones) and then a troop of neon purple nymphs headed to a sci-fi convention in an RV. When they find out that Lacie does not share their interest in “Sea of Tranquility,” a fantasy program starring a gender fluid space lieutenant, the cosplayers boot her out.

Lacie hijacks a four-wheeler and literally crawls through mud to give a speech about how Naomi’s friendship continues to inspire her. After the two girls met at art camp, they made a stuffed doll, Mr. Rags, that Lacie still keeps on her work desk. But as her brother reminds her, it’s all a lie: Naomi (Alice Eve), a classic mean girl, tortured Lacie throughout their childhood, even referring to her by a nickname so painful no dares to repeat it.

The only reason Lacie is willing to go through all that trouble is for the points. Lacie and Naomi live in a world driven by ratings systems, where you can score people based on your daily interactions with them. Your accumulated social popularity comes with rewards, like better seats on airplanes. The inverse is also true. A co-worker’s rating falls so low that automatic doors stop responding to him.

On her way to the wedding, Lacie is downvoted by almost everyone in her path: the condescending airport worker who refuses to help her, the attendant at the fueling station and even people passing by in their cars as she attempts to hitch a ride. There’s no real reason to do so, except to kick someone while they’re already down.

After Lacie drops to a 2.6, Naomi un-invites her to the wedding. It’s bad optics. Lacie, who has put herself through hell to get there, comes anyway, desperately needing the up votes from Naomi’s friends, all of whom have great ratings. Instead of getting the validation she seeks, Lacie is arrested and thrown into a jail cell.

This grim scenario greets the premiere of Netflix’s “Black Mirror,” the former BBC import that launches its third season on the streaming platform. No show in recent memory has embraced the “downer ending” as wholeheartedly as the cult hit series, in which humans struggle for connection, fulfillment and meaning in our modern techno-dystopia.

Part of that has to do with its format: Because it’s an anthology, “Black Mirror” is allowed to hit the reset button every week. The fact that the program tells standalone stories means it’s not obligated to see that its characters find traditional closure or resolution; they won’t be in the show next week. That gives the show the unique ability to go to dark, unexplored places that most other programs rarely visit.

Truly unhappy endings are relatively rare in television. “Breaking Bad,” one of the bleakest looks at American masculinity ever portrayed on the small screen, ended on a note of strange triumph for its meth-dealing antihero, Walter White. Walt, fatally wounded after one final shootout, returns to his meth lab after giving his family his sizable fortune, enacting his revenge on Lydia (Laura Fraser) and killing the neo-Nazis who kidnapped Jesse (Aaron Paul). As Slate’s Willa Paskin memorably put it, Walt was “rewarded . . . with a death on his own terms.”

The titular protagonist of “Dexter” (Michael C. Hall), leaving eight seasons of bodies in his wake, sailed off in the finale to be a lumberjack. Even Tony Soprano (James Gandolfini) didn’t quite get his: Just as it seemed like the mobster patriarch was going to get whacked, “The Sopranos” cut to black.

Compare these to cinema’s bitterest send-offs: Selma (Björk) being sent to the gallows as she sings a farewell number in “Dancer in the Dark,” the title character cradling Satan’s spawn in “Rosemary’s Baby,” or Dae-su (Choi Min-sik) cutting out his tongue after learning that his girlfriend is his long-lost daughter in “Oldboy.”

Perhaps the standard bearer is the grand orchestra of misery that brings “Requiem for a Dream” to a close: Sara Goldfarb (Ellen Burstyn) is driven mad by her unknowing addiction to speed pills, subjected to shock therapy in an institution. Her son (Jared Leto), a heroine junkie, has his arm amputated while in prison, while his girlfriend (Jennifer Connelly) performs in live sex shows for drugs.

If there are few equivalents in television to film’s great downers, that’s because the medium plays by very different rules. Fans of “Friends” invested several seasons and countless hours rooting for Ross (David Schwimmer) and Rachel (Jennifer Aniston) to get together. So can you imagine if Ross’ beloved pet monkey had contracted Ebola and killed them both? Or if a meteor struck Earth right before Jim (John Krasinski) and Pam (Jenna Fischer) tied the knot on “The Office?”

During the tearful series finale of “Gilmore Girls,” Rory (Alexis Bledel) finally graduates from college, thus realizing her mother’s Ivy League dreams, but what if Stars Hollow were to be attacked by a roving zombie horde instead? The small screen doesn’t do this, as viewers would riot. When we spend that much time with people, audiences want things to turn out well for them, even when the characters don’t deserve it (see: #TeamWalt).

There are, however, some examples of truly downbeat endings on the small screen. After her lover dies and her best friend abruptly vanishes after one final cocktail, “The Good Wife’s” Alicia Florrick (Julianna Margulies) runs after Jason (Jeffery Dean Morgan), a man who may represent a chance at happiness. Alicia, though, is chasing a shadow. Instead, she comes face-to-face with Diane (Christine Baranski), the colleague and mentor she has betrayed for the last time. Diane slaps Alicia forcefully across the face.

“Six Feet Under,” during a heartbreaking and moving sequence, shows its entire cast growing old and dying. “Xena: Warrior Princess” ends with the protagonist (Lucy Lawless) sacrificing herself to save her lover.

Aside from “Six Feet Under,” ending on a low note is frequently unpopular. “Seinfeld” spent its two-part finale with its central quartet locked in purgatory, forced to atone for all their bad deeds. The teenage detective of “Veronica Mars” (Kristen Bell) is humiliated when the aftermath of a leaked sex tape ruins her father’s bid to be the sheriff of Neptune, a plot thread left hanging by the series’ cancellation. It had to be fixed by the show’s revival, a movie funded on Kickstarter to right the finale’s wrongs.

The most infamous examples, though, are “Dinosaurs” and “Alf,” shows that abruptly shifted tone in their final moments. In a bait and switch, Alf thinks he’s returning home to Melmac, but the cat-eating alien is instead apprehended by government agents. The characters in “Dinosaurs” freeze to death in an onslaught of an ice age as a heavy-handed (but not inaccurate) message about the potential dangers of climate change.

It was “American Horror Story” that first signaled that there was a way around this trap — of going dark without alienating one’s audience. The show’s first season, “Murder House,” painted itself into a dramatic corner: Everyone dies. How could the show continue when all its central characters have kicked the bucket?

The FX program came up with an ingenious solution, announcing in December 2011 that “AHS” would be telling new stories each season with a new cast. That coup also offered the show a nice "get out of jail free" card for lazy writing, as demonstrated by “Coven”: You can do whatever you want, including making it up as you go along, with no real consequence. Next season, none of this will matter.

But to its credit, the anthology form allows an immense freedom not offered by traditional episodic television. That’s been a major boon to “Black Mirror,” which frequently subjects its protagonists to the extremes of human experience —without necessarily bringing them back.

The existential pessimism of “Black Mirror” recalls the show it's most often compared to: “The Twilight Zone.” The classic series revels in seeing people, usually unaware of their frightful destinies, powerless to halt the realizations of their fates. Three pilots briefly disappear in “And When the Sky Was Opened” while flying the X-20 Dynasoar, an experimental prototype. After crash-landing to Earth, they begin vanishing one by one. Col. Ed Harrington (Charles Aidman) is overcome with a nagging fear that he no longer exists. Harrington telephones his parents, who inform him that they do not have a son. After he disappears, only his co-pilot remembers that he was ever alive. Harrington isn’t even mentioned in headlines about the crash.

There’s little rhyme or reason to why things happen in “The Twilight Zone.” Why don’t the protagonists in “Five Characters in Search of an Exit” know they are toys? Why is Edward (Richard Conte) haunted by visions of Maya, a leopard-clad dancer straight out of “Carnival of Souls,” in “Perchance to Dream?”

But in “Black Mirror,” there’s an O. Henry-esque cause and effect logic at play. If Lacie didn’t put so much investment in what others think of her, she wouldn’t be bearing her soul to a room full of strangers — all of whom she knows are looking down on her — in the hope that they’ll give her a pity “like.” If shame weren’t such a powerful tool, a group of hackers wouldn’t be able to leverage our most guarded secrets to play the most dangerous game. Who doesn’t have a secret someone could weaponize against them?

But in the deepest recesses of human misery, there is hope. What is so compelling about “Black Mirror” is that its characters often find comfort and even joy in the darkness. In “San Junipero,” heaven is literally a place on earth. The episode’s title refers to a Second Life program where elderly people, many comatose or immobile due to bodily depreciation, are able to interact with one another as their younger selves. Yorkie (Mackenzie Davis) meets Kelly (Gugu Mbatha-Raw) in a simulation styled like 1987.

Kelly is faced with a choice: Should she cross over permanently to San Junipero with Yorkie, where they will live forever young or see what else is out there? Kelly's daughter died in her 30s, before a virtual nirvana was possible, and Kelly’s husband had decided that if she didn’t get a shot at San Junipero, he didn’t want one either. The way this question is resolved is poignant, but it’s also heart-wrenchingly romantic: What does eternity mean to you?

There’s something that’s more honest — and oddly sanguine — about “Black Mirror” than classically upbeat programs. In the closing moments of “Nosedive,” the aforementioned premiere episode, an incarcerated Lacie screams at another prisoner for looking at her. The two begin to trade insults, taking pleasure in their ability to be cruel without the judgment of their peers. He tells Lacie he doesn’t like her bra. She says he looks like a discarded Picasso creation.

Their jabs at each other get increasingly louder until they escalate into a shared Wilhelm Scream. “Fuck you!” they yell, their ecstasy forming an unexpected smile on their faces. Lacie might have destroyed her entire life, but she found something better in the debris: liberation.