When Trump searched for his inner Lincoln at Gettysburg, he only found himself

On hallowed ground in Gettysburg, PA, Trump continued the hateful rhetoric he has been spewing all election 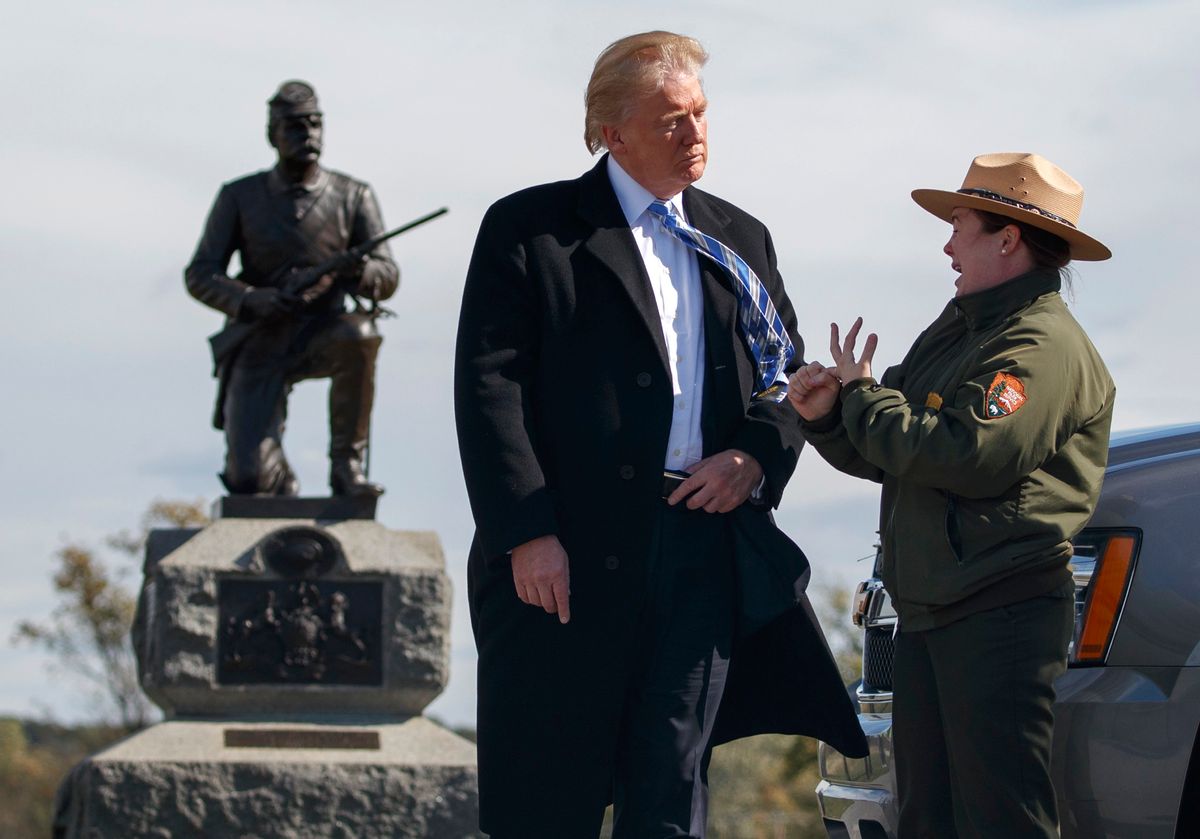 Unbelievable. On Saturday, there was Donald Trump desperately trying to jump on the coattails of Abraham Lincoln by delivering a speech in Gettysburg, Pennsylvania, the site of the sixteenth president’s memorable address, one of the finest, most concise and genuine pieces of rhetoric in American history.

(Given how things are going for them, if the campaign wanted a more appropriate American battlefield they probably should have booked the speech at the Little Big Horn.)

Hard to imagine The Great Emancipator making wild charges and slurs as Trump does.
The speech was billed as a preview of a President Trump’s first 100 days in office, a major policy address designed to “heal the divisions” in the country, but mostly it turned into one of Trump’s now familiar rants, including attacks on the media and the electoral process and his insistence that each of the women who have accused him of sexual harassment “lied when they came forward to hurt my campaign — total fabrication. The events never happened. Never. All of these liars will be sued after the election is over.”

Hard to imagine The Great Emancipator making wild charges and slurs as Trump does. In fact, can there be anything more ludicrous? Sure, and we’ll probably witness it in the next two weeks before Election Day. But for now, in search of the ridiculous, imagine if you will that in November 1863, Donald Trump had delivered the original Gettysburg Address:

Four score and seven years ago, my grandfather came to this country but don’t mention that he was an immigrant. Then his son, my father, brought me into his business and with his small loan of millions and generous coverage of my losses, helped me start my own business and bring forth many real estate projects and a reality TV show, conceived in ego, profit and product placement and dedicated to the proposition that only I am in charge and everyone else is a loser.

Now we are engaged in a great civil war, which, by the way, I was totally opposed to, ask anyone, but I will win because I know more than any of the generals. We are met on a great battlefield of that war and I have come here to dedicate the new Trump Gettysburg hotel and golf resort, which will also include a plaque to those who gave their lives here because after all, the veterans are so important and it’s sad that no one else realizes that. So my new resort here is altogether fitting and proper because I say so.

But, in a larger sense, the brave men, living and dead, who struggled here, are losers, too. The world will little note, nor long remember what they did here, but it can never forget what I’ve built here because it is better than anything you have ever seen before. Check out the marble in that lobby.

We also should be dedicated here to the unfinished work of the previous presidents who were so crooked and never got anything done because they know nothing about business and are weak and corrupt. The task remaining before us is to Make America Great Again, which it was before we got so politically correct about slaves and abolitionists constantly disrupted my rallies. I’d like to punch them right in the face.

So I resolve as no one else has that the dead here shall not have died in vain even though, as I said, they are losers, plus the other side tried to rig this whole war thing. But now that the battle’s done with, we can move on and make sure that government of the people, by the people, for the people goes away because it’s s a stupid idea that must have come from some nasty woman.

Thank you. May God bless America — and me.