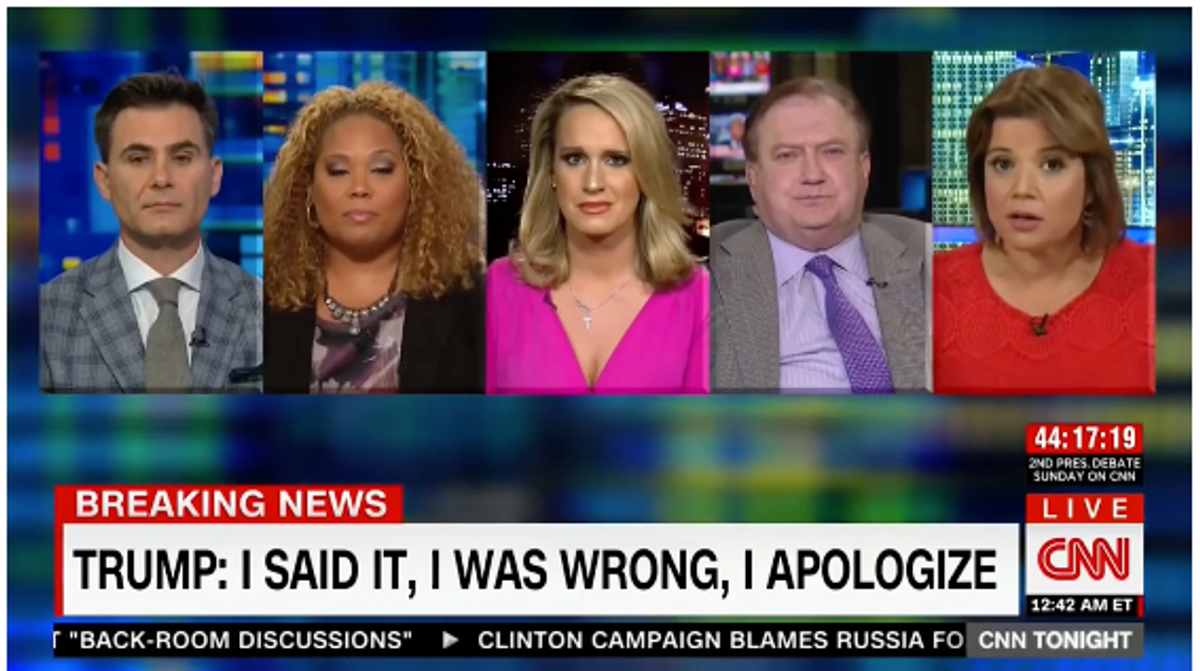 Conservative Republican women have been accused of not being good feminists in this election, and this accusation has been largely borne by female pundits and commentators. Some pundits, like Scottie Nell Hughes, have expressed a ride or die sentiment in support Republican presidential nominee Donald Trump. Others, like S.E. Cupp and Amanda Carpenter, have felt cornered into defending their party against sexist allegations that are indefensible.

"I don't expect women to be a monolithic body. I don't expect all conservative women to think alike, but Donald Trump does force very hard questions among women," Carpenter told The Washington Post in an article Tuesday. She added that Republican women have defended men against sexist charges for years, and that she expected the same support from the men in her party.

Like everything about the Republican Party when it comes to Donald Trump, reactions to concerns about "issue of the treatment of women" have been divided. Trump surrogates, like Rudy Giuliani and Newt Gingrich, have supported Trump in response to the sexual harassment. The support of many down-ticket Republicans, meanwhile, all but disappeared.

CNN commentators Ana Navarro and Scottie Nell Hughes displayed that women are not "a monolithic body" when they sparred on CNN after the Access Hollywood video was released earlier this month.

"It's been hard for, I think,  a lot of conservative women to contemplate the idea of feminism because it's been so owned by liberal Democrats pushing very progressive liberal policy ideas," Carpenter told The Washington Post. Conservative women who have contemplated feminism like Fox News' Megyn Kelly of "The Kelly File," have been accused of leaning left.

@megynkelly u should be mad at @HillaryClinton Clearly you support her. And @realDonaldTrump did talk to u. https://t.co/vsQiNMgHut

Commentator S.E Cupp, a conservative writer whose Twitter profile displays a picture of her holding a rifle, told The Washington Post: "I can’t tell you how embarrassing and uncomfortable it is to have to sit across from someone like Wolf Blitzer or Jake Tapper, two men I know and respect, and talk about the presidential nominee of my own party grabbing women’s genitals.

"That is not where I thought I would be. That is not why I aspired to do [be a commentator]. It is not what made me a Republican."