From the outside looking in: How the international media is reacting to the 2016 election 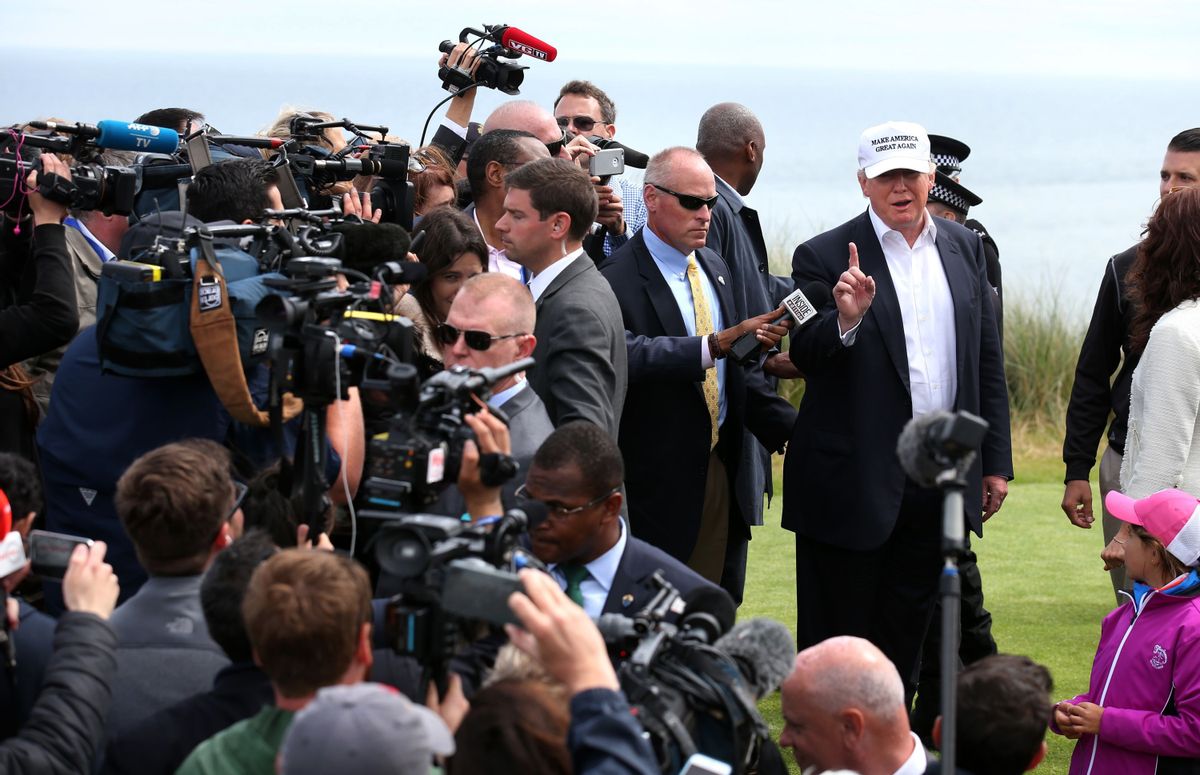 US presidential candidate Donald Trump, right, chats with the watching media whilst on a tour of the Trump International Golf Links at Balmedie, near Aberdeen, Scotland, Saturday June 25, 2016. Presidential hopeful Donald Trump is on a short break away from his presidential campaign. (Andrew Milligan / PA via AP) UNITED KINGDOM OUT - NO SALES - NO ARCHIVES (AP)
--

When Donald Trump repeatedly claims the election is “rigged,” it doesn’t just undermine voter confidence at home. It can also hurt the country’s standing around the world, where people have been closely following the presidential race.

Because of the United States’ predominant role in geopolitics and global economics, foreign governments and their citizens scrutinize the candidates and their positions, which can hint at future American policies. The campaign also acts as a snapshot of American democracy. According to political scientist Joseph Nye, America’s soft power – its ability to persuade foreign leaders and exert influence abroad – partly depends on how the rest of world interprets our political process, values and outcomes.

In order to assess what the world has been thinking about the ongoing election, we’ve been tracking global media coverage via 60 different news outlets in regions that represent over 1.5 billion people. Using the Media Monitoring System, which captures and translates foreign language content, we’re able to harvest large amounts of news media from multiple languages and read machine-generated translations (which aren’t perfect, but do the trick).

While the research is ongoing and we can’t adequately present all points of view, it is possible to discern clear trends in the coverage.

We can offer a snapshot from three regions – China, Russia and the Arab world – that currently present a geopolitical challenge to the United States. In doing so, we can see the lens through which citizens are viewing the unfolding political drama.

China: Stability above all

The Chinese media – which include official, government-controlled outlets and the relatively privatized media sector – generally take two approaches when commenting on American politics.

First, they’ll often point to the arrogance of American politicians, especially those who stress the superiority of the U.S. democratic system over those of other nations. Next, they usually hesitate to make outright editorial arguments. Instead, they’ll quote international figures and analysts to advance a particular point of view.

Over the past few months, they’ve paid much attention to global criticism of Trump as potentially “the most reckless president” (as QQ News, a news aggregator, recently wrote). But Clinton is heavily criticized as well. For example, the Xinhua news agency put out an article that drew heavily from the Wikileaks DNC documents and argued that Clinton’s campaign is ahead because of close cooperation with U.S. media – a claim parroted by Trump.

Trump, they warn, would be likely to start a trade war with China, which would cost the United States five million jobs. The Global Times, a more nationalistic outlet, ran an expanded version of an article about Trump’s business dealings originally written by the international news outlet Agence France-Presse. The Chinese version insinuated that should Trump win the election, he would undoubtedly drop some of his more hostile language. The same paper also ran an editorial noting that although most Chinese preferred Clinton, some did prefer Trump because of Clinton’s “viciousness” toward China, primarily over the issue of human rights.

Overall, however, the tone of Chinese coverage has stressed the unpredictability and “recklessness” of Trump and cited the view of international political analysts to express cautious optimism that Clinton will win. Despite the optimism, China’s main news agency Xinhua concluded that the U.S. election is playing out “like [a] soap opera” and “causing widespread concern.”

Xinhua further argued that “no matter who wins the general election,” the people of the United States “will have lost.”

Russia, of course, is playing a unique role in the current election. Many U.S. policymakers believe that Russia was behind the hack of DNC emails, and a prominent Russian politician recently declared that Clinton’s election could lead to nuclear war between the two nations.

While that claim is probably over the top, there’s no question that Russian media has a pro-Trump bias. Although many Americans fear that this is because Trump is willfully naive on Russian expansionism, Russian news outlets express deep dissatisfaction with Clinton. The business paper Kommersant sent a reporter to a Trump rally, where the correspondent was told by a Trump supporter, “We have a divided country, you [Russia] don’t. You have a strong leader and man of action, we need the same.”

Russian media often praise Trump for his business acumen. Clinton, they say, has it out for the Russians, with claims that the country “purposefully bombs [and] wants to destroy many of the residents of Syria” (as the broadsheet Izvestia put it). Meanwhile, the daily Gazeta concluded that discussion of Russia is nothing but a wedge issue for Trump and Clinton, with Clinton “using the anti-Russian card more often.”

The preference for Trump doesn’t mean that he escapes criticism, however.

The popular Moscow daily Komsomolets summed up the second debate with the following: “Never before have the American people seen such debates, when one candidate (Trump) threatened to put the opponent in jail.” Kommersant criticized the debates for the way the candidates have spent most of the “time talking about the negative qualities of their [opponents’] failures and not presenting their vision for the development of the economy.”

The Arab world: ‘The worst candidate in history’

The Arab world has a diverse population spread across 22 nations, and our analysis has pulled from a number of both pan-regional sources: major outlets such as Qatar’s Al-Jazeera and the Saudi-based Al-Arabiya, as well as those with a limited national reach, like Egypt’s Al-Ahram.

Nonetheless, across the region there’s a strong consensus that Clinton is the preferable president.

Although Arabic media does report on some of the more salacious scandals – the Trump tape and the rehashing of Bill Clinton’s infidelities – coverage centers primarily upon the two candidates’ views toward the region and towards Muslims.

Overall, the media frame Clinton’s foreign policy much more positively than Trump’s. For example, the Jordanian outlet Ad-Dustour reported that Clinton supported “the establishment of safe areas in Syria,” while “promising to investigate … Russia’s war crimes in Syria.”

Arab media frequently praise Clinton’s stance that “Muslims [are] part of America.” Trump’s anti-immigrant views, not surprisingly, are viewed negatively, with the Egyptian daily Al-Ahram stating “the Republican candidate’s hatred of Islam is a shame.” Another Egyptian paper, Al-Dustour, said that Trump was the “worst candidate [for] the presidency in the history of the United States.”

Al-Jazeera noted that Trump’s candidacy represents “a sad scenario” and argued that the election demonstrates “the ineffectiveness of Western democracy.”

What this means for the United States

Al-Jazeera’s analysis hits on a major theme in the coverage abroad: The election reflects poorly on American democratic values, with much of the world finding little to emulate in the process.

As China’s official Xinhua news agency noted, the “presidential election has become like a farce,” with the “election chaos” a cause for global concern. Meanwhile, Syria’s state-run Thawra Al Wehda argued that the number of scandals and corruption proves that “it is not the right of the United States to teach others lessons on democracy.”

Although two of the regions we analyzed clearly indicate a preference for a Clinton presidency, Trump does have the support of Russia. This analysis of press coverage is consistent with recent polls that show strong preference for Clinton throughout the world.

Obviously, these news outlets (and their readers) aren’t voting. But the views of the foreign press matter. They influence the new administration’s ability to develop and promote a foreign agenda. They can also undermine how America is perceived in the areas that its leaders say matter the most: fairness, rule of law and human rights.

For these reasons, the victor of this particularly ugly election will not emerge unscathed. The country’s “brand” may have been irreparably harmed, its standing in the world lost.