Once he was a harmless if idiotic Mickey D's pitchman — but now he's Moon Man, the alt-right's hip-hop hero 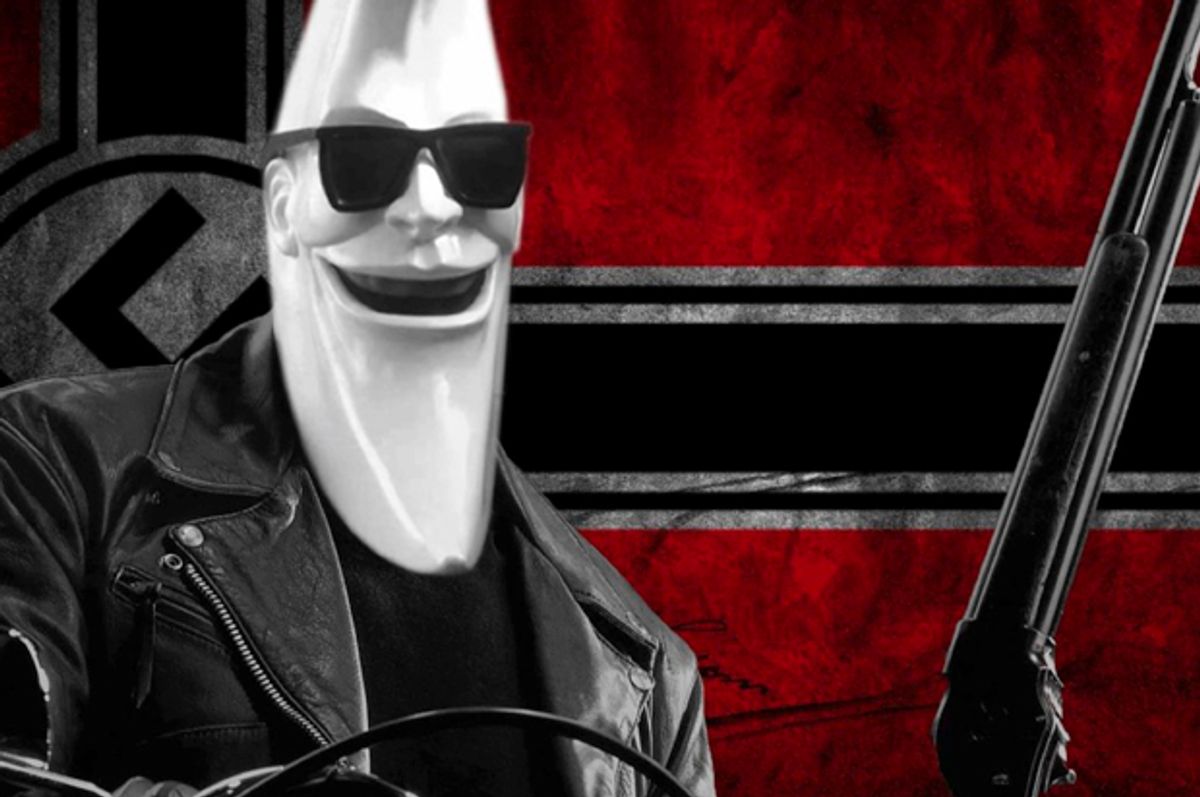 From Elvis and the Beatles to N.W.A. and Miley Cyrus, popular music acts have been accused of degrading women, promoting racism and spreading degeneracy. Generally speaking, the music industry and cultural elites have shrugged off the critiques as nothing more than uptight whining from fusty feminists and bluenose Christians.

As time has gone by, even the general public has become seemingly unshockable. Being outrageous has become so passé that even Lady Gaga has seemingly hung up the meat dress for good.

But all that was before the emergence of Moon Man, an underground rapper who's acquiring a fast-growing cult following in a way that stands out from other controversial rappers on various levels: he's white, he loves Donald Trump, and he doesn't actually exist.

Like his younger and more famous cousin Pepe the Nazi Frog, Moon Man has become an avatar of the alt-right, although he didn't start out that way. Pepe and Moon Man are both products of the anonymous message boards that generate so many of the humorous and shocking memes that circulate throughout the rest of the internet.

Also like Pepe, Moon Man is actually a spinoff of an earlier character — Mac Tonight, the weird-looking anthropomorphic moon that McDonald’s created in 1986 to entice baby boomers to eat dinner at its restaurants. The character’s original name was drawn from “Mack the Knife,” the famous number from Kurt Weill and Bertolt Brecht’s “Threepenny Opera” that became a No. 1 hit for Bobby Darin in 1959.

Mac Tonight faded into obscurity after McDonald’s dumped him in the mid-’90s. In 2007, however, the fast-food chain brought him back in Southeast Asia. That same year, he was also reborn in the United States on the ytmnd board in a joke video from a user named farkle that featured a short, looped video of Mac Tonight with the popular nonsense song “Chacarron” by reggaeton singer El Chombo playing in the background.

After several similar videos were created, fans of the character — since rechristened Moon Man — took him in a different direction. At first this was inspired by the long tradition of pop-music parody, from Weird Al Yankovic to the Evolution Control Committee.

Using the demonstration website of a speech-to-text synthesizer created by AT&T, the amateur producers of Moon Man’s videos programmed a computerized voice to read nonsensical and offensive lyrics of their own, somewhat in the vein of the violent and profane version of physicist Stephen Hawking featured in several 'Family Guy" episodes.

Moon Man clips began to appear in September 2007: The first one featured the onetime advertising icon rapping on top of a background track from the song “Money in the Bank” by Lil Scrappy. The parody lyrics weren’t that different from the original song — save for a repeated chorus of “KKK, KKK,” which subsequently set the tone and direction for this repurposed character.

After numerous iterations, Moon Man and his original “Moon Crew” producers became less and less about sarcastic racism and more and more about actual racism, perhaps due to Mac Tonight’s slight cranial resemblance to a Klan member’s ceremonial hood.

The lunar racist’s popularity exploded in early 2015 when the virtual rapper was discovered by members of 4chan and 8chan and their spin-offs. Like Moon Man, these popular image-board communities had made a similar transition beyond irony as they joined up with the old-school white nationalists who been congregating at the margins among supporters of former Republican presidential candidate Ron Paul to form the new political movement known as the alt-right.

Soon thereafter, Moon Man’s fans began posting the clips all over YouTube and creating their own, including ones featuring dialogues with other artificial voices as well as essay clips, including a series mocking clickbait videos produced by BuzzFeed. They have created dedicated fan boards and devised multiple “mooniverses” featuring origin stories for the character.

As is the case for many other rappers, Moon Man’s oeuvre also deals with political issues, including many of the same ones touched on by left-wing artists. As one would expect, Moon Man always takes the opposite side with as much or even more rhetorical vehemence.

While Eminem and other actual rappers have spoken about their desire to do various violent things to Donald Trump and his supporters, Moon Man’s producers have him boast about how he’ll do violent things on behalf of the GOP presidential nominee or even suggest that Trump himself is going to lynch black people.

Continuing the flipping of the script, many clips feature the robotic deadpan voice praising police for shooting African-American men and criticizing them for not doing it more often. Several Moon Man songs feature a virtual “black voice” intoning “Black lives matter," only to be answered by Moon Man: “I’ll serve your f**king head on a silver platter.”

Moon Man also frequently boasts of his love of killing black and Jewish people. One track that has proven especially popular mocks and celebrates the recent mass shooting at an Orlando gay club, over a sample of Kool & the Gang’s “Summer Madness.”

Hundreds of the racist songs have been produced, with more coming every month, even as sharing sites like YouTube continually remove them for terms-of-use violations. AT&T has also taken action against the Moon Man movement, setting up filters on its text-to-speech demonstration site that block submissions containing the rapper’s name and other offensive words. McDonald’s has probably filed more than a few trademark infringement complaints as well.

Like similar efforts on the part of the Anti-Defamation League to return Pepe the Frog to his nonracist origins, none of these actions have stopped Moon Man. Invariably, every time one of his clips is removed, it’s posted again by someone else. The reborn fast food icon’s tech-savvy fans have also figured out how to circumvent AT&T’s keyword filters and have even set up their own generator websites.

This unusual determination among Moon Man’s producers and admirers appears to stem from the belief that the robotic racist is giving voice to frustration of young white men who believe they have been betrayed by society — and especially by Republican elites whom they see as deceitful, incompetent and venal.

Earlier this year, the neo-Nazi website Infostormer defended the robotic racist, suggesting he is no different from more mainstream rappers:

Despite the criticism, Moon Man insists that his lyrics are no worse than what you hear from Jew financed n***er rappers. He has said that he is simply tired of political correctness, the non-White invasion of White countries, disgusting mentally ill faggots and feminist whores.

While we certainly don’t endorse Moon Man’s violent lyrics, he has tapped into an anger within the young White European male who is outraged at the endless amounts of third world filth that is being let into their nations.

The Moon Man phenomenon is also likely spreading because its white nationalist message is wrapped inside visual and audio packaging that is inherently absurd and idiotic — catnip to younger adults raised in a pop-culture environment where profane sarcasm has become the lingua franca.

The songs’ adoption and inversion of imagery and lyrical methods used by leftist rappers admired by music industry elites almost certainly adds to its appeal for the young right-wingers who are reinventing Dadaism. An iconic photo of the legendary '80s rap act N.W.A., for instance, has been altered to depict Moon Man accompanied by three hooded Klansmen.

The fact that anyone can produce or archive Moon Man clips also makes it almost impossible to suppress Mac Tonight’s unauthorized alter ego and discern the motives of his legions of anonymous creators. Some undoubtedly embrace the message of all-purpose hate in Moon Man’s lyrics; still others are most likely in it for the lulz.

Mainstream political reporters and pop culture critics have largely been unaware of this alt-right’s musical sensation. But Moon Man may be about to blow up, thanks to a crowd-funded campaign to place billboards featuring Moon Man beaming down on a Pepe-Trump cartoon hybrid who’s guarding the GOP nominee’s long-promised border wall with Mexico.

As of this writing, the effort has brought in more than $5,000 and thousands of positive retweets on Twitter. Including Moon Man on the billboard has sparked some controversy, however.

Someone going by the moniker Sam Hyde, who claims to have produced the original image, said that while he was “honored that my work will serve the Trumpenkrieg,” he didn’t think that including the racist parody rapper on the poster was a good idea.

“You should probably take moonman out of it,” he argued in a comment posted to WeSearchr, the alt-right crowdfunding site that raised the money for the effort. His comment was echoed by another user on the site. Several others, including at least one contributor, said Moon Man needed to be included.

“Moonman stays,” wrote a commenter named Frontierland. “To the Anti-Whites, both Ron Paul and Hitler are racist, so it really doesn't matter. If your White and don't agree to your own genocide, your a Naziwhowantstokillsixmillionjews.”

At press time, WeSearchr had not announced any possible locations for the Trump-Moon Man billboard.