After the Trump bump: Cable news has been the big winner this election season — but that's about to end

Americans say they're sick of presidential election coverage, but the ratings tell a different story 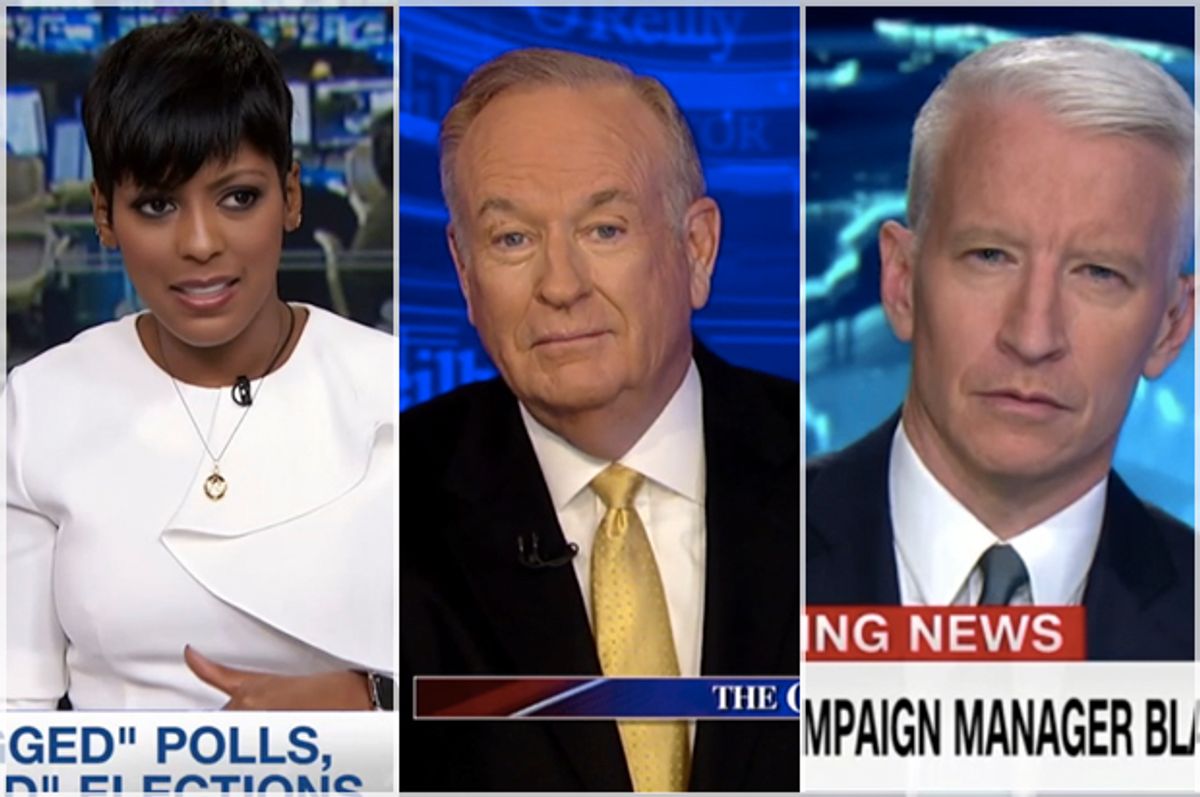 Ever since Donald Trump descended from that gilded Trump Tower escalator to announce his presidential bid last year, Fox News, CNN and MSNBC have been cashing in on the theatrics, covering every angle of the spectacle known as the 2016 presidential race.

If the American public is as tired of coverage, as they profess to pollsters, this certainly isn’t reflected in cable news networks' ratings as the country barrels toward Election Day. In fact, this could wind up being a record year for cable news.

For months, executives at CNN, Fox News and MSNBC have boasted about the ratings boost this election has provided, with record-high viewership numbers during the primary season, over the conventions and through the three presidential debates — the first of which was the mostly widely watched in history.

CNN and Fox News have seized the moment, charging up to 40 times their usual rates for 30-second spots — as much as $100,000 — during the Republican and Democrat conventions. Overall the three cable news networks are expected to rake in nearly $1.96 billion in ad revenue this year, significantly higher than the $1.56 billion earned during the last U.S. presidential election year, in 2012.

Behind all this advertising revenue are the millions of viewers who gravitate to cable news every election cycle but seem to back away during the in-between years, at least for CNN and MSNBC. According to data from media market research firm Nielsen, as of mid-October the three networks were boasting a combined average of 4.6 million prime-time viewers, well above the 4.2 million that clustered around TV sets and computer screens in 2008 to watch as Barack Obama defeated the Republican nominee, John McCain, to become the nation’s first African-American president.

Cable news viewership rapidly dropped following the 2008 election, and the numbers continued to decline in subsequent years, by about a million viewers from 2008 to 2011, according to Jesse Holcomb, associate director of research at the Pew Research Center.

“It was a big enough drop that there were a lot of questions,” Holcomb told Salon. “Can cable’s business model sustain these nonelection-year fallow periods?”

Then came the 2012 election cycle that ended up with President Obama's defeating former Massachusetts governor Mitt Romney for a second term in office. The election cycle helped drive viewers back to the networks but the rebound failed to match the spike of 2008, rising to only about 3.6 million prime-times viewers. The decline continued over the next two years, as viewership dropped to about 2.8 million, with more than 60 percent going to Fox News.

Gene Ely, editor of Media Life magazine, which serves media planners and buyers with market data, says he has no doubt that after Nov. 8, all three cable news networks will be hit with a considerable decline in viewership and a corresponding drop in advertising revenue. The cable-news leader Fox News will lose viewers, too, Ely says, but it will maintain its traditional lead because of its position as a right-wing sounding board.

“Assuming Trump loses, Fox News will slide into its old role as the complainer-in-chief network, attacking the new president and liberals in Congress, government regulation, etc.—what Fox has always done,” Ely said in an email to Salon. “The intriguing question is whether it will play into [Trump’s campaign pledges], talking up building a wall, for example, or taking a hard line on immigration by Muslims.”

Viewers may be claiming to be fed up with with the election, but if history is any proof, it will take the next two to three months for viewers to lose interest in watching election coverage, according to Holcomb. After all, the ratings feast will continue through a wave of post-race analyses, no matter which candidate takes the White House. After that, however, expect several years of famine, until the 2020 race picks up in earnest.