Donald does D.C.: Trump's hotel launch was the strangest "campaign" event of 2016

Donald Trump held a bizarre pseudo-campaign event in Washington, which is home to some very nice hotels 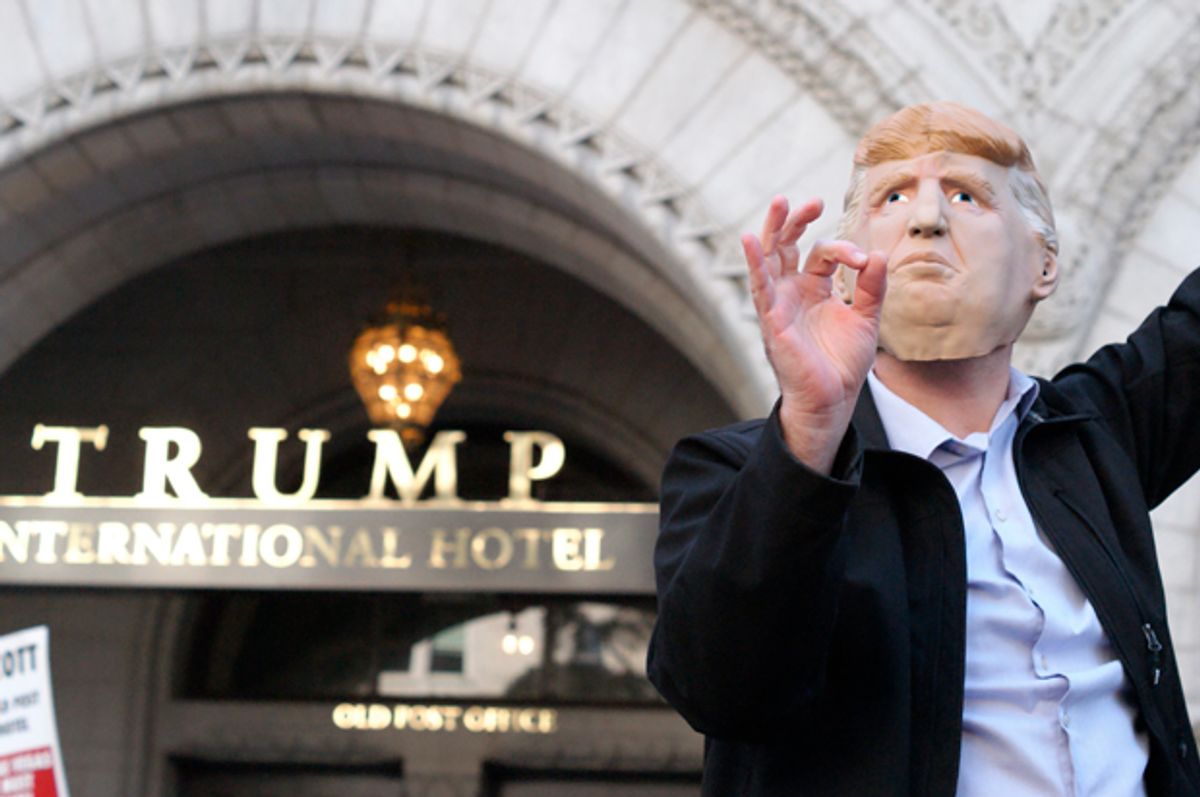 WASHINGTON — With just 13 days remaining in the 2016 presidential race, Donald Trump, the Republican nominee, held a campaign event in Washington. I know it was a campaign event because I, a political journalist of dubious renown, obtained my press credential for this event through Trump’s campaign website, where it was listed as an event on his campaign schedule.

As you can see, all the evidence suggests that Trump came to Washington for the sole and explicit purpose of campaigning for the presidency and nothing else.

The site Trump chose for this campaign event was a landmark building in downtown D.C., a short distance from the White House. It’s a nice building. You’d point it out if you drove past it. I believe it’s on the Segway tour route. The building, I should note, is a block away from the Hotel Harrington, another Washington landmark that offers affordable room rates at a convenient location. If for some reason you’re looking for a hotel in D.C., you should definitely consider the Hotel Harrington, which, again, is just a block away from the building where Trump held his campaign event.

Anyway, Trump’s choice to campaign in the District of Columbia was a strange one. The nation’s capital is one of the most heavily fortified Democratic strongholds in the country: D.C. voters gave Barack Obama 92 percent and 91 percent of the vote in 2008 and 2012, respectively. And the district has just three measly electoral votes to offer.

One might be tempted to argue that Washington’s proximity to northern Virginia could justify spending valuable campaign time here, but the Virginia suburbs are also strongly Democratic and the Republicans who live there are the wealthy, highly educated ones who generally aren’t Trump's biggest supporters.

I suppose it’s possible that some Trump-curious voters drove in from the more far-flung reaches of Virginia and Pennsylvania for the Trump event. If so, I hope they stayed overnight at The Willard, another Washington institution that offers fine luxury accommodations and is conveniently located mere steps from the building where Donald Trump held his campaign event.

If any potential Trump supporters did come all that way, however, they left disappointed (with Trump, I mean, not with their Willard Hotel experience). In a curious twist, the general public was not permitted to attend this event which, I hasten to reiterate, was advertised on Trump’s campaign website. There were campaign staffers roaming about and campaign surrogates like Sen. Jeff Sessions and onetime House speaker Newt Gingrich were in attendance but no regular voters were let in.

Adding to the weirdness was the fact that Trump campaign staffers were telling reporters that it wasn’t actually a campaign event. But when Trump took the stage to speak, he let fly with some standard campaign trail rhetoric. He said “everything our government touches is broken,” he warned about “decaying infrastructure” and “our aging military,” he said the Affordable Care Act was in “free fall” and attacked his Democratic rival Hillary Clinton for supporting it, and he offered to “make America great again.”

That said, a good chunk of Trump’s remarks had nothing to do with politics. He spent a lot of time talking about the building itself, praising it and marveling at its splendor, which seemed a bit out of place for a presidential campaign event. He noticeably failed to note, however, that this magnificent and splendid building that hosted his campaign event was within walking distance of the Hotel Monaco: a lovely luxury hotel that amazingly used to be an old post office.

It would have been nice if Trump had mentioned that, just in case anyone happened to be looking for a hotel.

Anyway, Trump concluded his remarks and then left to go to other campaign events in North Carolina, a state that actually is worth his attention. I roamed around outside the event venue to try to find a few Trump supporters to speak with, but they were in short supply. Instead, several dozen union-backed protesters were picketing the event.

So I don’t think Trump did himself any favors as a presidential candidate by hosting a campaign event in Washington. Though it was a rare treat for me, as a political writer based in the D.C. area, to cover a presidential campaign event in my own backyard. It’s likely that I’ll never have that opportunity again in my lifetime. I think I’ll commemorate the occasion with a drink.

I hear the Park Hyatt Washington has a nice bar.