Donald Trump and the GOP base: A closed universe of small-minded self-deception

Trump and the Republican base are perfectly suited — psychological misfits, unable to face a changing society 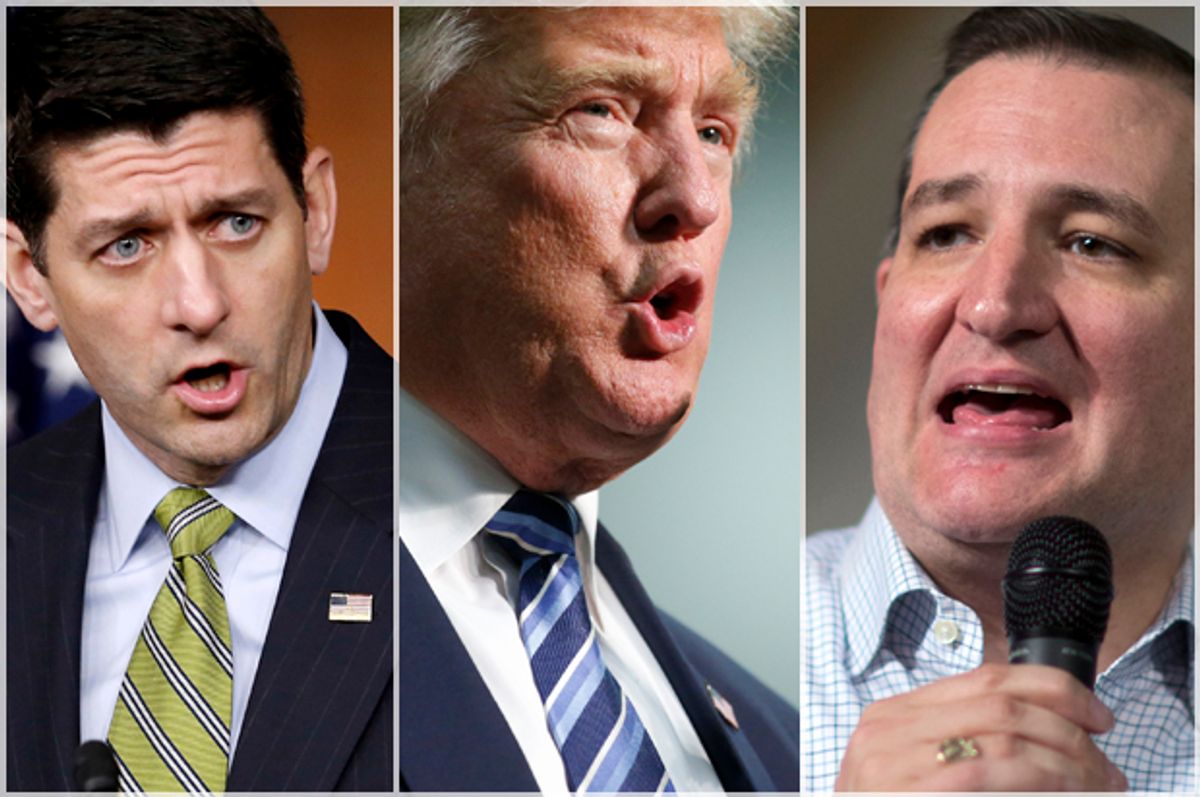 The New York Times ran an interesting story this week featuring some 2014 audio interviews for a proposed biography of Donald Trump and a long interview with Michael D'Antonio, the author who conducted the interviews. When asked for comment by the Times, Trump said they were "pretty old and pretty boring stuff. Hope people enjoy it."

They aren't old and they aren't boring, and nothing about Trump is exactly enjoyable. But they are worth our attention.

These audio recordings are published in snippets within an interview with D'Antonio on the Times' "Run-Up" election podcast. They concentrate mostly on Trump's psychological makeup, which is — no surprise here — stunningly weird. Trump is uncomfortably revealing while simultaneously displaying absolutely no self-awareness. The disturbing if familiar portrait painted in this story is that of a manipulative, grandiose narcissist with no self-control.

Trump doesn't want to evaluate his mistakes; in fact he doesn't believe he's made any. Everything is other people's fault; and he refuses to listen to anyone, so he repeats the same errors over and over again. As I read the story and listened to the snippets of interviews and the accompanying commentary, it occurred to me that when Donald Trump says, “I don’t like to analyze myself because I might not like what I see,” he truly is the living embodiment of the base of the Republican Party.

Think about it. The GOP has lost the popular vote in all but one presidential election in the last quarter century. The elders of the party know they have a problem with their overwhelmingly white voter base and its hostility to the emerging demographic changes in the country, and they know the party's ideology has to be updated to accommodate the modern world. Their laissez-faire economic policies failed and their small-government philosophy is inadequate to greet such global challenges as climate change and mass migration.

But their voters don't want to hear it. Party elders all gathered in the wake of former Republican nominee Mitt Romney's 2012 presidential election defeat to conduct an "autopsy" and set out a plan to adapt their philosophy to changing circumstances and relax their rigid adherence to certain tribal prerogatives, in order to appeal to a broader spectrum of the public. They stressed that they needed to be more open to minority concerns and women's issues and understood they had to find a way to deal with the challenge of immigration in a more humane way. As the report's authors rightly advised:

If Hispanic Americans perceive that a GOP nominee or candidate does not want them in the United States (i.e., self-deportation), they will not pay attention to our next sentence. It does not matter what we say about education, jobs or the economy; if Hispanics think we do not want them here, they will close their ears to our policies.

Like Trump, the voters have had no interest in such introspection and no desire to to change anything. Indeed, they wanted to double down on xenophobia, racism and sexism and crudely reject anyone who wasn't exactly like them. And like their new leader, they romanticize violence and keep scores against their enemies. Trump, with his promise to take America back to its overwhelmingly white, male-dominated past, was just what the doctor ordered.

Trump goes on and on in the interview about how winners have to learn how to "acclimate" to new circumstances and sells himself as someone who is particularly good at that. But his performance as a presidential candidate illustrates his self-deception. He has been constitutionally unable to summon the discipline required to stay on message, create a working organization and resist the impulses that drive him to create havoc with his strategy. His campaign has been a train wreck mostly because he has insisted on running it by the seat of his pants, trusting that his instincts are so superior that he didn't need to learn anything from anyone.

This trait is also reflected in the GOP's base of voters, who refuse to accept that the world is changing and they have to change with it. Instead, they cling obstinately to a privileged status that no longer exists and close their minds to the reality that it really isn't necessary in the first place. As Salon's Matthew Rozsa pointed out this week, they yearn for a return to a time when America was dominated culturally and economically by white people and led exclusively by men.

In a survey published by the Public Religion Research Institute, 72 percent of likely voters supporting Republican nominee Donald Trump say America has changed for the worst since the 1950s. By contrast, 70 percent of likely voters supporting his Democratic rival Hillary Clinton say that America has changed for the better since that decade.

All but the oldest among them have no idea what it was like in the '50s, other than the fact that uppity people of color and women knew their places. They are anything but "acclimated" to the modern world.

So Trump is the perfect candidate for this group. It's not just that they are aligned in their xenophobia and bigotry, they are aligned psychologically. It's essentially about an outsized fear of humiliation and the inability to accept loss, particularly at the hands of people they regard as inferior.

One anecdote in the Times story really encapsulates those underlying dynamics of this race. Trump's first wife, Ivana, recalled that when she and Donald were first dating they went to a ski resort and she failed to tell him that she was an excellent skier. He went down the hill first and waited for her at the bottom. She said:

Unfortunately for Trump, Clinton just ripped and shredded her way down the double black diamond slope of presidential politics — and he's standing there watching her fly by. And he cannot take it. It still had not occurred to him that a woman could be better than him at anything.