Gay and voting for Donald Trump? It’s not as crazy as it seems

Stop being shocked over LGBT support for the GOP candidate — queer voters are vulnerable to Trump's message, too 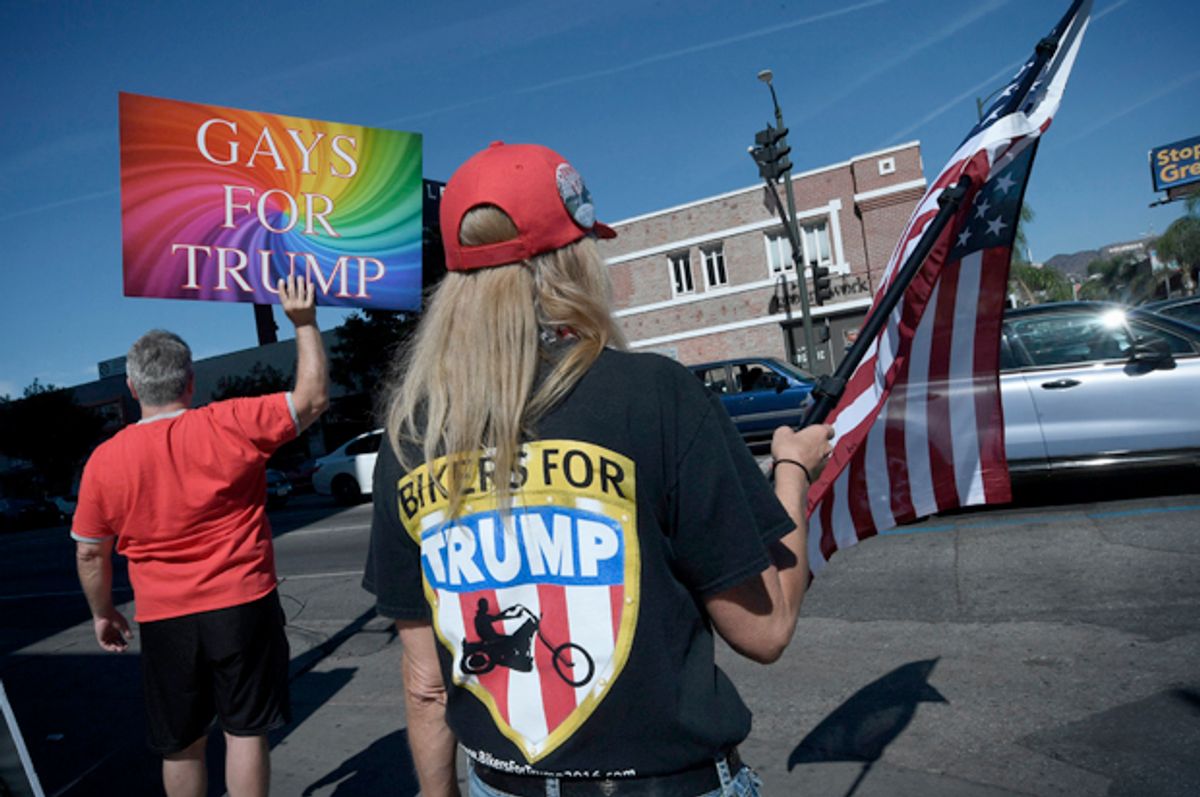 How could you possibly vote for Republican nominee Donald Trump if you have a friend, family member or co-worker who is LGBT?

That’s the question that the Human Rights Campaign is asking in a new video designed to mobilize support for Democratic presidential nominee Hillary Clinton. The ad is part of an unprecedented get-out-the-vote effort in key swing states seen as pivotal to Clinton’s chances of winning on Election Day, which include battlegrounds like Pennsylvania, North Carolina, Florida and Nevada. The group hopes to target LGBT voters — a population that’s estimated to be at about 10 million — to help put Clinton over the top.

It might seem hypocritical that someone can have gay friends and still support Trump but that fact shouldn’t be surprising — especially when there are plenty of LGBT voters planning to cast a ballot for him on Election Day.

Last week adult entertainer Colby Keller, the erudite hunk often known as the “thinking man’s gay porn star,” made waves when he came out as a Trump supporter. Keller, who has guested on the first season of HBO’s acclaimed “High Maintenance,” told Office magazine that he thinks Trump could bring about a political revolution, calling him a “destabilizing force.” PayPal co-founder Peter Thiel, a Trump supporter, became the first openly gay man to speak at the Republican National Convention in June. A Cincinnati gay couple made headlines after showing up at a Trump rally holding hands. YouTube star Kyle Kittleson said he was backing Trump last year, but has since rescinded his support.

Trump’s support in the LGBT community is small but nonetheless considerable. An estimated 20 percent of registered LGBT voters plan to vote for the billionaire businessman, according to a NBC News/SurveyMonkey poll conducted in September, while 80 percent are voting for Clinton. That’s roughly in line with, if a bit smaller than the LGBT support for Republican presidential candidate Mitt Romney back in 2012 (23 percent), John McCain in 2008 (27 percent) and George W. Bush in 2004 (23 percent).

These static numbers might suggest that conservative voters in the LGBT community are merely diehards who will vote for any Republican candidate, no matter how dangerous or destructive their beliefs are. During the Republican National Convention in July, the GOP unveiled the most virulently anti-LGBT platform in its history.

In addition to doubling down on the party’s stated opposition to marriage equality, Republicans openly advocated for conversion therapy, a dangerous, discredited practice that seeks to “change” the sexual orientation or gender identity of LGBT youths. Such treatments have been condemned by groups like the American Psychological Association.

The key to Trump’s LGBT appeal isn’t just ticket loyalty. As his party moves to the far right, the CEO has been falsely billed as an ally to the LGBT community. Although the Log Cabin Republicans opted not to support Trump because of his ties to anti-gay zealots like Jerry Falwell Jr. and Rick Santorum, the organization's president, Gregory T. Angelo, said that Trump could be the “most pro-LGBT president that this country has ever had.”

That claim is fairly laughable. Barack Obama, who stated his support for civil unions during the 2008 presidential election, came out for full marriage equality in 2012. That’s a year before Clinton announced her change of heart on the issue.

Obama, who was named Out magazine’s “Ally of the Year” in 2015 signed an executive order the previous year protecting LGBT government workers from discrimination. Federal contractors can no longer be fired for their sexual orientation or gender identity. His administration has also fought for equal access in school bathrooms for transgender students, according to its interpretation of Title IX protections as being inclusive of gender identity.

Trump’s platform is a study in contrasts. He has threatened to repeal Obama’s executive orders, while promising to appoint justices that would overturn the Supreme Court’s 2015 ruling on marriage equality. Although he initially came out against House Bill 2, a discriminatory law in North Carolina that bars trans people from using public bathrooms that correspond with their gender identity, Trump now supports it.

Meanwhile, his vice presidential pick, Mike Pence, passed one of the nation’s harshest anti-LGBT laws as the governor of Indiana. The Religious Freedom Restoration Act, signed into law in 2015, allows businesses to discriminate against LGBT clientele based on a proprietor’s “sincerely held religious beliefs.” While running for Congress in 2000, Pence also advocated for funding for lifesaving HIV medications to be redirected to organizations “which provide assistance to those seeking to change their sexual behavior.” The Indiana Policy Review, for which Pence previously served as the president, published an article in 1993 urging businesses to not hire LGBT workers.

Trump isn’t the compassionate conservative you’re looking for. But what he has done — and very successfully, one might say — is to use the LGBT community to drum up support for his plan to place American Muslims in a Third Reich-style registry.

During the Republican National Convention, Trump became the first GOP presidential nominee to ever mention the LGBT community in his acceptance speech. That act wasn’t a benevolent one: He exploited the Orlando Pulse nightclub shooting — in which a lone gunman killed 49 people, while injuring 53 more, in a Florida gay bar — by connecting it to radical Islamic terror.

Although the shooter, 29-year-old Omar Mateen, professed his allegiance to ISIS in an emergency call made prior to the attack, reports indicate that it’s unlikely he was a member of the radical Islamic terror organization. Mateen allegedly didn’t know the difference between ISIS, Hezbollah, and al-Qaida, groups that have been in conflict for decades.

“As president, I will do everything in my power to protect LGBTQ citizens from the violence and oppression of a hateful foreign ideology,” Trump nonetheless claimed. His statement, seemingly groundbreaking, was met with applause. Going off script, he added, “And, I have to say, as a Republican, it is so nice to hear you cheering for what I just said.”

This has been a common tactic of the Republican Party throughout the 2016 race — to openly state support for the LGBT community even while pushing policies that would roll back the gains made by activists in recent years. During the Republican primary, Texas Sen. Ted Cruz repeatedly warned against the danger of allowing transgender people to use the bathroom of their choice. He referred to affirming restroom access as allowing “grown men . . . to use the little girls’ restroom.” But even while branding trans people as dangerous bathroom predators, Cruz called on Democrats to “speak out against an ideology that calls for the murder of gays and lesbians.”

But when it comes to exploiting the LGBT community, Florida Sen. Marco Rubio takes the cake. Although Rubio has opposed marriage equality, adoption for same-sex couples and employment nondiscrimination for LGBT workers, he claimed to have a change of heart following the Pulse shooting. Calling the tragedy “the new face of the war on terror,” the onetime presidential candidate said, “the gay community was targeted in this attack." Added Rubio: "Watch the videos. We know what ISIS has done to people they accuse of being homosexual. They throw them off of buildings. They execute them.”

Rubio, who had previously planned to step down from his position in the Senate, used the massacre as a galvanizing force to campaign for another term in Congress. Once fearing defeat if he ran again, the strategy appears to have worked for Rubio: The most recent survey from Public Policy Polling shows that the incumbent is ahead by 6 points in the Sunshine State over Patrick Murphy, his Democratic challenger.

Why does this work? The truth is that while the LGBT community is known for being relatively progressive, it’s just as vulnerable to political campaigns that use base fearmongering to scapegoat vulnerable populations. Being gay, lesbian or transgender might give you an understanding of homophobia, sexism or transphobia but not necessarily the intersectional issues that affect other communities of which you are not a member. This phenomenon is sometimes referred to the portmanteau “gaycism,” but really it’s just plain ol’ racism.

A good example of this problem is the case of Icandy , a gay bar in Philadelphia that has recently come under fire after reports that its owner, Darryl DePiano, used racial slurs when referring to people of color who patronize the bar. Woody’s, another popular watering hole in the city, was criticized for an alleged “No Timberlands” policy, one that critics argue was intended to keep black patrons out of the club.

Those who have protested these establishments say that it only compounds the exclusion they feel in the community, whether it’s going to their corner gay bar or logging onto hookup apps like Grindr and Scruff. Those platforms are notorious for disclaimers like “No Asians, No Blacks” or “Whites Only” on members’ profiles.

It’s no accident that these populations are the exact ones who have the most to lose in Trump’s America.

Members of the LGBT community can pat themselves on the back that the Republican’s support among queer voters is historically low. In a four-way race, he fares even worse than the figures cited above: Clinton leads with 63 percent of LGBT voters, while Trump scores just 15 percent, barely ahead of the paltry support for third-party candidates Gary Johnson and Jill Stein.

But if Trump has brought the forces of bigotry out of the closet, we shouldn’t forget that those demons are the same ones the LGBT community is still fighting, too.