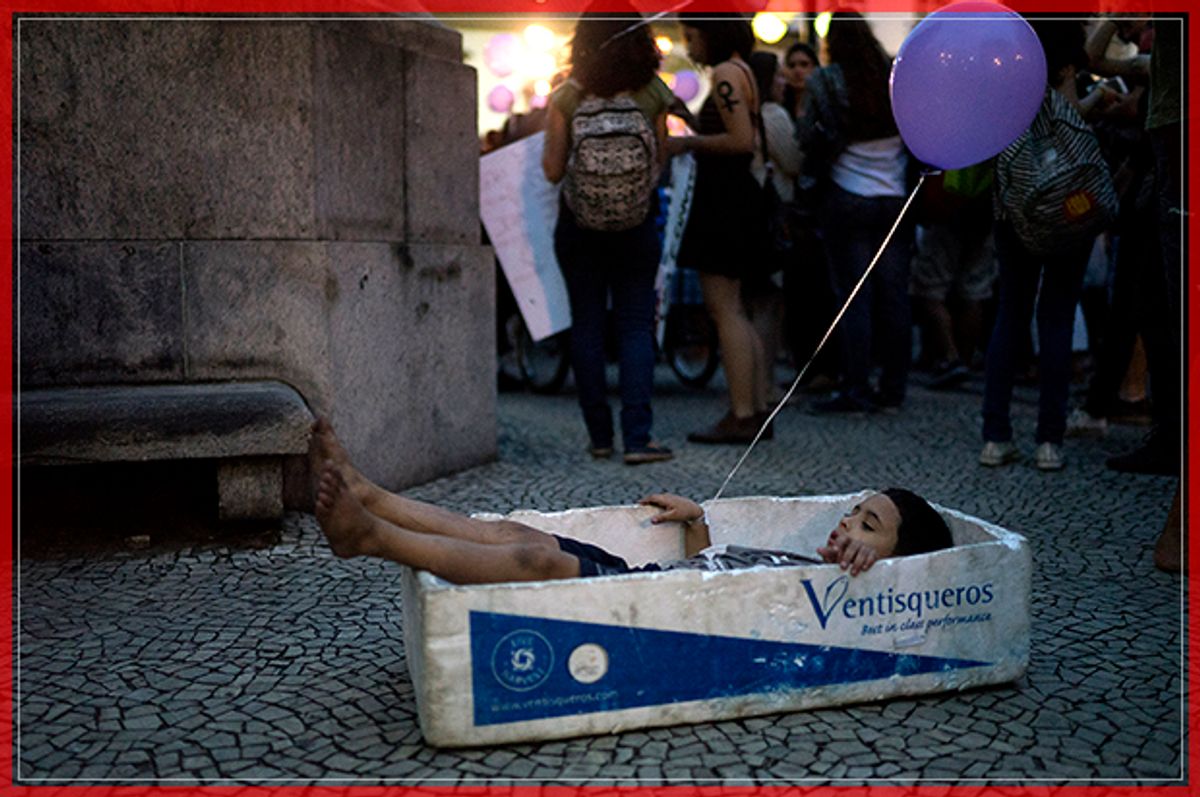 A boy plays with a foam box that is used to carry fish, during a demonstration against gender violence in Rio de Janeiro, Brazil, Tuesday, Oct. 25, 2016. Women in Brazil organized protests condemning violence against women following the recent brutal gang rape of a woman on the outskirts of Rio de Janeiro by suspected drug dealers. The boy played with the box as his street vendor father sold water during the demonstration. (AP Photo/Leo Correa) (AP)
-- This photo was taken in Germany, but in a way it perfectly encapsulates what we as a country are going through right now.
–Benjamin Wheelock, senior art director

Calais, France  Christopher Furlong/Getty
A migrant attempts to retrieve a French flag while destructive fires rip through the Jungle Camp in Calais A very similar image, Liberty Leading the People, hangs at the Louvre reminding visitors and French people of the fight for freedom and democracy. In a sad turn, the tricolor flag waves here as a reminder of the deprivation of rights that migrants and refugees are facing in their way into Europe.

Rio de Janeiro, Brazil   Leo Correa/AP
A boy plays in a box during a demonstration against gender violence It's sometimes hard to distinguish a protest from a carnival. In Brazil, demonstrations broke out on Tuesday over gender violence. It's a serious issue plaguing a dysfunctional country, but at least one boy found a way to entertain himself.

Mosul, Iraq   Bulent Kilic/Getty
Relatives are reunited through a chain-link fence at an Iraqi refugee camp Relief, elation, exhaustion – this frame evokes these feelings and so many more. These freshly reunited women are part of the crush of displaced Iraqis who are joining loved ones at a refugee camp near the Kurdish checkpoint of Aksi Kalak. According to the United Nations Office for the Coordination of Humanitarian Affairs, some 9000 people have been internally displaced due to military operations currently underway to retake Mosul from Islamic State fighters. UN officials fear the fighting will spark the largest humanitarian crisis of this year.