Newt Gingrich attacks Megyn Kelly and Fox News: "I am sick and tired of people like you using language that's not true"

Gingrich also yelled at Megyn Kelly, telling the host, "You are fascinated with sex!" 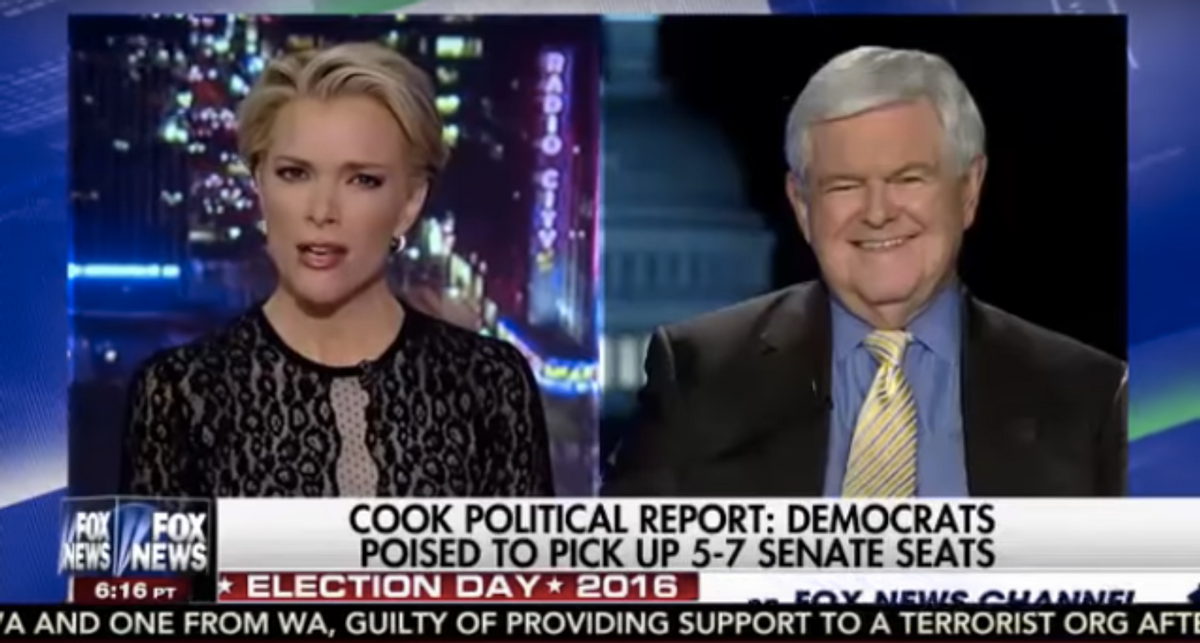 The tension that’s been bubbling inside Fox News ever since Donald Trump declared he would run for president burst out of the cauldron on Tuesday night when former speaker of the House Newt Gingrich attacked the network itself and host Megyn Kelly.

As it’s been for months, the hot topic last night was Trump and the many public polls that have shown the Republican nominee behind in his presidential race with his Democratic rival Hillary Clinton both nationally and in swing states. Pushed to respond, the Trump-supporting former congressman lashed out at Kelly and accused polling organizations and mainstream political analysts of being biased against his candidate.

“They’re not nonpartisan outlets,” Gingrich asserted. “Every outlet you described is part of the establishment.”

Noting that he had included Fox News’ political desk in his indictment, Kelly pushed back: “Fox News? Really, are we? I don’t think so.”

Retorted Gingrich: “Oh come on!” He then asserted that given his many years in politics, he didn’t “take polls as seriously as people who’ve never run for office.”

That much certainly is true. In 2012, Gingrich was similarly skeptical of the many surveys that showed President Barack Obama ahead of that year’s Republican nominee, Mitt Romney. Interviewed by Greta Van Susteren, the former House speaker predicted that Romney would win the presidency with at least 53 percent of the popular vote and more than 300 electoral votes.

That’s not quite what happened. Romney finished with just more than 47 percent of the popular vote and won only 206 electoral votes.

After ripping the fairness and honesty of Fox News’ data geeks, the defensive Gingrich moved on to attacking Kelly, using similar language that her intramural rival Sean Hannity has used to imply that she secretly supports Clinton.

“I know where you’re coming from,” he said, after Kelly argued that Trump has been harming himself by his own actions. Gingrich then turned to attacking the media in general for providing too much coverage of the Republican candidate’s recorded remarks about kissing and grabbing women’s genitals in comparison to some controversial speeches that Hillary Clinton gave to banking companies.

Kelly interrupted him: “If Donald Trump is sexual predator —” she began to ask.

“He’s not a sexual predator!” Gingrich exploded, apparently missing that his host had included the word if in her sentence. “You can’t say that! You could not defend that statement!”

The enraged former congressman continued: “I am sick and tired of people like you using language that’s inflammatory that’s not true!”

Kelly calmly responded, “I’m not taking a position on it.”

“Yes you are,” Gingrich replied. “When you used the words, you took a position. And I think it’s very unfair of you to do that, Megyn. I think that’s exactly the bias people are upset by.”

The exchange could have continued like that, probably for quite a while, had not Kelly stepped in and emphatically let the Trump-supporting Republican know that she was asking a question, not making a statement. He finally relented but reverted to attacking the amount of time that television news operations have spent on covering the sexual assault allegations against Trump in comparison to the Clinton remarks. Kelly said that she had covered the Clinton speeches.

Gingrich disagreed: “You are fascinated with sex and you don’t care about public policy. That’s what I get out of watching you tonight.”

Kelly took the insult in stride, quietly laughing it off and then parried: “You know what, Mr. Speaker? I’m not fascinated by sex. But I am fascinated by the protection of women and understanding what we’re getting in the Oval Office.”

Gingrich continued his line of attack. “And that’s why we’re going to send Bill Clinton back to the East Wing because after all you are worried about sexual predators,” replied the thrice-married former presidential candidate — who left both of his ex-wives while they were sick.

“It’s not about me, it’s about the women and men of America,” Kelly replied. She then explained how public surveys indicated voters were more concerned about Trump’s alleged actions than those of former president Bill Clinton.

Gingrich's shocking attacks on Fox News and its star host suggest that he, too, may be interested in a hypothetical Trump TV operation designed to attract the audience that Fox has been losing over the course of the presidential campaign.

.@MegynKelly made a total fool out of herself tonight- attacking @realDonaldTrump. Watch what happens to her after this election is over.