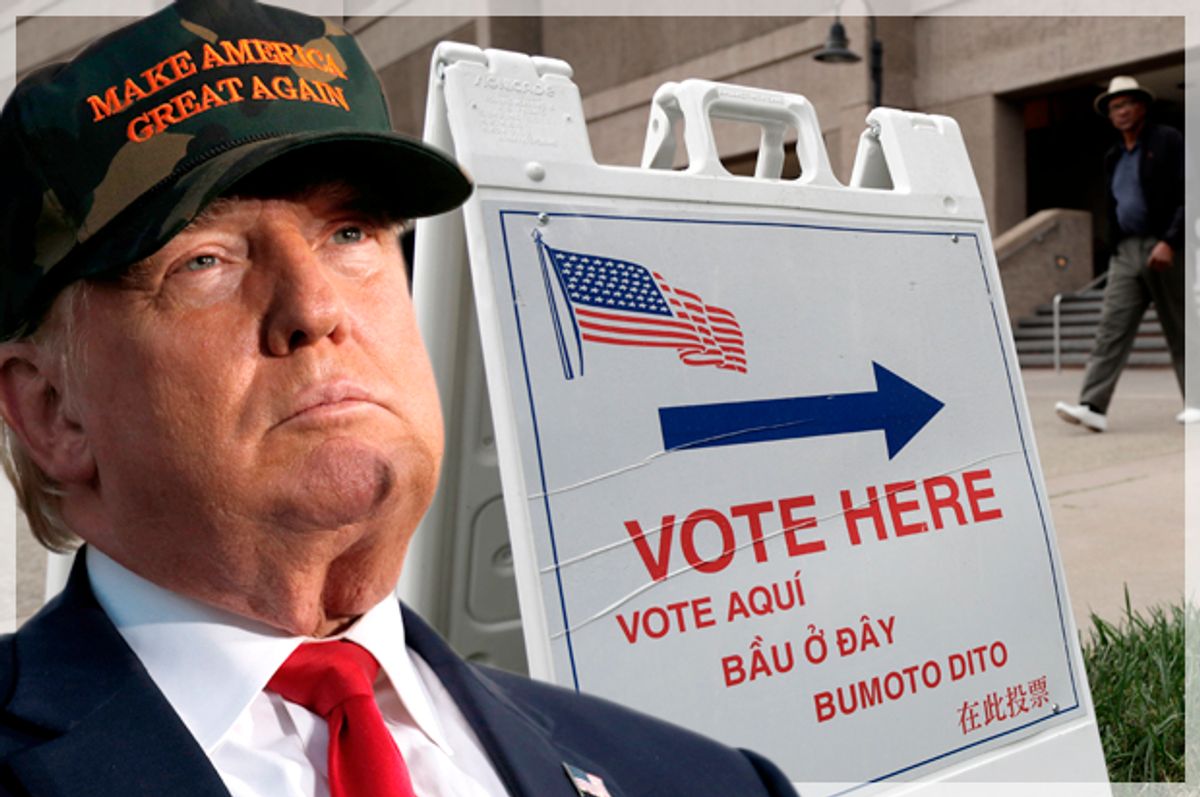 The presidential campaign of Republican Donald Trump is lurching towards defeat. Trump is already making pre-emptive excuses for losing to his Democratic rival, Hillary Clinton, on Election Day.

According to Trump, the news media is conspiring against him. The election may also be “stolen” and “rigged” by black and brown voters in America’s “inner cities,” whose votes will “cancel out” those of the “real Americans” who support his candidacy. Instead of being dismissed as the conspiranoid rants of a fascist bigot, such claims are resonating among Republican voters.

Of course this is fantastical thinking. Voter fraud is remarkably rare in the United States. Voters are counted by state-level organizations. Consequently, organizing a national campaign of voter fraud would be extremely difficult, bordering on impossible.

And it is the Republican Party — and not the Democratic Party — that has engaged in a nationwide effort to suppress the votes of people of color, younger voters, the poor, the working classes and elderly people. This is compounded by how the Republican Party has deftly used gerrymandering and other means to exaggerate the representation of white conservative voters and suppress the votes of nonwhites as well as more liberal and left-leaning voters.

As the Nation’s Ari Berman deftly recently explained in a story in The Washington Post, “The real threat of election-rigging lies not in the small number of voting irregularities, which Trump and many Republicans have blown wildly out of proportion, but in the much larger number of people disenfranchised by new voting restrictions.”

Nevertheless, cries of voter fraud and stolen elections resonate with Republicans because they have been fed such disinformation over the course of several losing presidential elections by Fox News and the broader right-wing news entertainment complex (with allegations of fraud by ACORN made by Republican candidates John McCain and Sarah Palin in 2008; and  charges of “skewed polls” made by Republicans Mitt Romney and Paul Ryan in 2012).

Trump is the product of an extremely polarized and dysfunctional political system. As research by social scientists such as Douglas McAdam, Michael Dawson, Michael Tesler and others has repeatedly shown, attitudes about race and gender are central to this puzzle. This is especially true in the age of Obama and with the almost pathological-like resistance that the United States’ first black president has encountered from white conservatives.

Correlation is not necessarily causation. But at this political moment there is a clear and troubling parallel between the narrative that “the system is rigged” against Trump and Republican voters — the overwhelming majority of whom are white — and the growing belief among white Americans that they are “victims” of “reverse discrimination” or similar types of unfair treatment.

For example, research by professors Samuel Sommers and Michael Norton has found that a belief in racial bias against white Americans has risen significantly in the last 30 years. As of 2011, Sommers and Norton found that white respondents believed that “anti-white bias” was a greater problem than discrimination and racism against black people in America. This was complemented by a 2013 report by the AP and the National Opinion Research Center, which showed that white people are much less likely to be hopeful about their futures than are people of color.

A 2013 study by psychologists Alison Blodorn and Laurie T. O. Brien found that whites' claims that they are “victims” of “reverse discrimination” are perceived to be signals of conservative ideology.

In 2015, psychologist Clara L Wilkins demonstrated a prevalent belief that racial equality is a type of “zero sum” game, in which efforts to promote fairness and equal opportunity are perceived as a threat by members of the dominant group (men and white people). By implication, those who believe in “reverse discrimination” or that white men are treated unfairly are more likely to support policies that hurt people of color and women.

And don't forget: Trump’s largest and most reliable base of support is among white men — especially among those without a college degree.

A number of recent studies highlight how support for Trump among Republican and right-leaning independent male voters is closely related to a sense of disempowerment and anxiety about men’s place in American society.

For example, a October 2016 survey by PRRI and The Atlantic showed that voters who feel that society “punishes men for acting like men” are significantly more likely to support Trump than  Clinton.

Moreover, self-identified Republicans and conservatives were significantly more likely to agree that men are unfairly punished in American society than were Democrats and liberals. Education was also a key variable in the PRRI/The Atlantic survey.

The Atlantic’s Olga Khazan explained how:

In the PRRI/The Atlantic survey, education level and gender played a role in whether respondents felt men are punished unfairly by society. Men — and less-educated men in particular — were more likely than women to agree. Among Americans with a high-school degree or less, 25 percent “completely agreed” that men are punished just for being themselves.

The education gap seems even more striking when pollsters asked people if they think “society as a whole has become too soft and feminine.” White, working-class Americans — a crucial part of Trump’s base — were more likely to agree with that statement than white, college-educated respondents were.

Research by Fairleigh Dickinson University’s Dan Cassino has demonstrated that 41 percent of Republican (white) men believe that they have been treated unfairly because of their gender.

Feelings are not facts. In reality, white men — and white Americans as a group — benefit disproportionately from a society that's oriented around protecting their economic, political and social power. While they may feel alienated and disempowered or somehow convinced that “reverse racism” exists and has a meaningful negative impact on their life outcomes, almost all of the available social science and other data suggests that white privilege pays significant and unearned economic, political, and emotional dividends to white Americans.

Ultimately, while a given white person may experience hardship and challenges in American society, those experiences are not because they are “white” but rather occur despite that fact.

Trump, a straight white man and a billionaire and reality TV star, believes that he is a victim of a conspiracy. Republican voters believe that their party and its 2016 presidential nominee are also victims. Trump’s supporters think that they and their champion are victims as well. It would seem that all of them have an extreme case of the sickness and existential melancholy known as the white victimology blues.

Hopefully when Trump is defeated on Election Day, their dread and anger will only increase.

As explained in an article “Donald Trump and ‘Reverse Racism,’” by political consultant Bruce Bartlett, “there’s a 'jockeying for stigma' among groups in America today. This competition is surprising because being marginalized often equates to being powerless, yet many whites now use their sense of marginalization as a rallying cry toward action.”

Unfortunately, there are expert political operators who are eager to mine and profit from this angst. These are the white supremacists and white nationalists — professional white grievance mongers — who are already manipulating Trump from within his inner circle and from the shadows. There will be no healing on Election Day and thereafter because the white victimology blues pay too many dividends … and the political profits of hate are too great to let slip away.