U.N. warns "an entire generation could be crippled by hunger," as war leaves 14 million Yemenis short of food 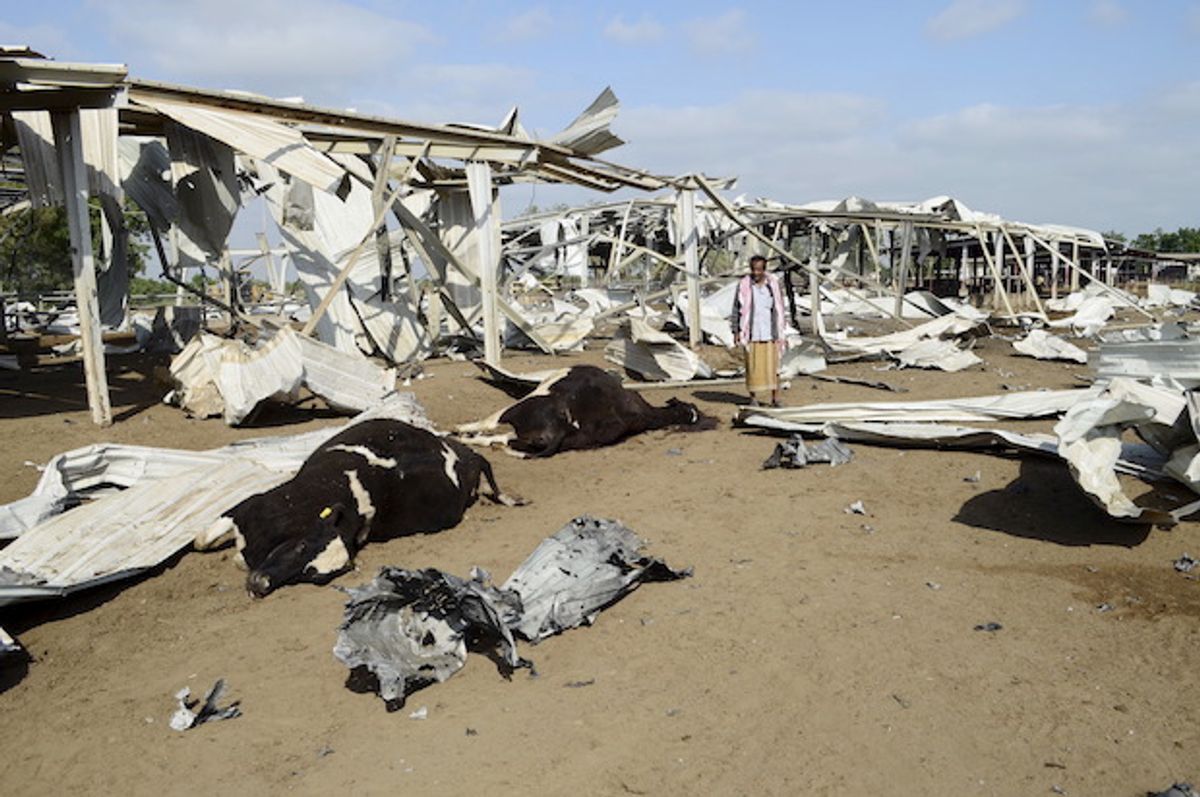 A Yemeni man looks at his cows killed by a U.S.-backed, Saudi-led airstrike at a dairy farm in Bajil in Yemen's western province of Hudaydah, January 2, 2016 (Reuters/Abduljabbar Zeyad)
--

Saudi forces backed by the United States are intentionally targeting food production and the agricultural sector in their bombing campaign in Yemen, according to a leading expert. In some parts of the impoverished country, the Saudi-led coalition is using a "scorched-earth strategy," says a scholar who specializes in agriculture in Yemen.

"The coalition was and is targeting intentionally food production, not simply agriculture in the fields," Martha Mundy, a professor emeritus at the London School of Economics, told Salon.

Since March 2015, a coalition of Middle Eastern countries led by Saudi Arabia and armed and supported by the U.S. and Britain has bombed Yemen, creating what the United Nations has characterized as one of the worst humanitarian catastrophes in the world.

A blockade imposed by Saudi Arabia has further exacerbated this crisis, pushing hunger-stricken Yemen to the brink of famine. “An entire generation could be crippled by hunger,” a World Food Program official warned this week. At least 14 million Yemenis, more than half of the country's population, are going hungry.

Meanwhile, the Western-backed coalition is going out of its way to target food sources in the desperate country, according to Mundy, who in recent years has published scholarly articles in English and Arabic on the political economy of food and agricultural policy in Yemen.

Saudi-led forces have for 19 months have tried to topple Yemen's Houthi movement, which seized power in late 2014, in order to restore to power the former pro-Saudi leader Abd-Rabbu Mansour Hadi, who had been appointed president in 2012 after an ostensible election with no opposition candidates.

"In the first three months of the war the targets were largely military, but when surrender did not result, the pattern of targeting changed," Mundy told Salon via email.

In a recent The Independent article, Mundy said the Saudi coalition is "deliberately targeting Yemen’s tiny agricultural sector in a campaign which, if successful, would lead a post-war Yemeni nation not just into starvation but total reliance on food imports for survival."

"A degree of targeting that can't be accidental comes through both the data sets on targets of coalition bombing," Mundy added, noting that she is still conducting a more thorough analysis of the time of the attacks.

On Aug. 12, the coalition bombed and destroyed the main bridge to Sanaa, the Yemeni capital, on a road where roughly 90 percent of U.N. food and other aid is transported from the port city Hodeidah. After the attack, Oxfam issued a statement warning that the bridge's destruction "threatens to leave many more people unable to feed themselves, worsening an already catastrophic situation in the country."

Mundy said that the main road between Sanaa and Hodeidah has been repeatedly hit as part of a larger intentional strategy.

Agricultural infrastructure has been targeted in particular. Given that Yemen is still a largely agricultural nation, with more than half the population reliant on farming in some way, the bombing has had a horrific impact.

At least 357 agricultural targets have been bombed in Yemen's 20 provinces — a conservative estimate in a report by Yemen's ministry of agriculture and irrigation that was obtained by Mundy. In addition to markets, stores, factories and food trucks, the Western-backed coalition has bombed farms, animals, water infrastructure and agricultural banks.

Just 2.8 percent of Yemen's land is cultivated, Mundy told The Independent's Robert Fisk, citing a figure from the Food and Agriculture Organization of the U.N. "To hit that small amount of agricultural land, you have to target it," she said. The Independent article pointed out that the intentional destruction of civilian food supplies violates the Geneva Conventions, a major basis for international law.

At least 10,000 Yemenis have been killed in the ongoing, 19-month war, including more than 4,100 civilians, according to the U.N. The United Nations has also repeatedly reported that the U.S.-backed, Saudi-led coalition is responsible for nearly two-thirds of civilian deaths, whereas Houthi rebels and allied militias loyal to former Yemeni president Ali Abdullah Saleh have been responsible for less than one-fourth of civilian deaths. Extremist groups like al-Qaida and ISIS, which have been strengthened by the war, were responsible for the rest.

Yet these are tallies of deaths caused by warring parties; they could pale in comparison to the possibly enormous number of Yemenis who might die from starvation and malnutrition.

Since June 2015 nongovernmental organizations have warned that more than 80 percent of Yemen's population (at least 21 million people) is in desperate need of humanitarian aid, including food, water and medicine. The Saudi blockade has made the already disastrous effects of the bombing even worse.

"The blockade of ports by the coalition also greatly affected inputs for agriculture and food imports," Mundy told Salon. "The bombing and the blockade had conjoined effects."

This week the United Nations warned of these cataclysmic effects. “Hunger is increasing every day and people have exhausted all their survival strategies. Millions of people cannot survive without external assistance,”said Muhannad Hadi, World Food Program director for the region.

June 2016 U.N. statistics showed that 14.1 million Yemenis are food insecure, including 7 million who face severe shortages of food. This figure has stayed roughly the same since Salon reported on mass starvation in January. At that time the U.N. Food and Agriculture Organization had said the numbers were "staggering" and called the humanitarian catastrophe a "forgotten crisis." As early as December 2015, the U.N. warned that Yemen could be facing an impending famine.

Not all of the impoverished country's governorates (as its administrative divisions are called) have suffered the same in the war. In some governorates, 70 percent of the population is struggling to get enough food, the World Food Program reported.

This is not surprising, according to Mundy's research. "Different areas of the country have had different patterns of bombings," she told Salon. "Something resembling a scorched-earth strategy appears to have been the case in Saada governorate in the far north. This is clear from the bombing data lists and also from other Arabic media sources, which reported recently that 55 percent of the population of the governorate has sought refuge in other governorates."

Other northern Yemeni governorates, such as Hajjah, Amran, Sanaa and Hodeidah, "have been very heavily hit," Mundy said. The governorate of Marib, near the capital, "was extremely heavily bombed (including agriculture, transport, and even historical monuments such as the dam) until it fell under control of forces aligned with the coalition," she added.

"By contrast other areas of the country — while they have all (save Hadramaut and Mahra) seen strikes on agricultural infrastructure and food production facilities — have not seen a fully blown scorched-earth strategy," Mundy continued. "Those under the control of the coalition were completely or largely spared."

The fact that areas controlled by Saudi-backed forces have not sustained intense destruction further suggests that this is an intentional strategy. Mundy stressed that the coalition tactic of targeting food production "was not the strategy from the very beginning, but has been part of the pattern of targeting for over a year."

Saudi Arabia has not carried out these atrocities on its own. A New York Times editorial "America Is Complicit in the Carnage in Yemen" observed, "Experts say the [Saudi] coalition would be grounded if Washington withheld its support."

The U.S. has offered more than $115 billion in weapons sales and military support to Saudi Arabia since 2009, including more than $20 billion in 2015 alone. Several arms deals among the dozens included billions worth of weapons and ammunition expressly for the war in Yemen. Amnesty International accused the U.S. government of “deadly hypocrisy” for its massive weapons sales.

U.S. military support has also been crucial. The United States has conducted more than 1,000 refueling sorties, providing tens of millions of pounds of fuel for Saudi warplanes. The U.S. military has also offered intelligence and has even had officers physically in the room with Saudi command officers.

Rights groups have said for months that the U.S. could be held accountable for war crimes carried out by the coalition. Publicly, the U.S. government has criticized the coalition's rights violations and called on it to stop targeting civilians. Privately, on the other hand, internal documents obtained by Reuters show that State Department officials have discussed ways to minimize accountability for U.S. complicity.

Recent atrocities have brought more attention to the bloody war, which previously had received little coverage in U.S. media outlets.

On Oct. 8, the Saudi-led coalition dropped U.S.-made bombs on a funeral in Sanaa, killing more than 140 people and wounding at least 600 in what Human Rights Watch said was an apparent war crime.

Scores of similar atrocities have been carried out. Amnesty International and Human Rights Watch have documented more than 70 unlawful coalition airstrikes, as a conservative estimate. These rights groups have also documented the coalition's use of widely banned cluster munitions, weapons made by the U.S. and U.K., in civilian areas in Yemen.

Mundy said she is still analyzing additional data, but says she is confident that the U.S.-backed, Saudi-led coalition is intentionally bombing Yemen's agricultural sector, further fueling what may already be the world's worst humanitarian catastrophe.