"Insecure" in the workplace: Issa Rae nails the frustrations of being black at the office

"To be one of the only black people at work, nobody knows what that's like better than us," Issa Rae tells Salon 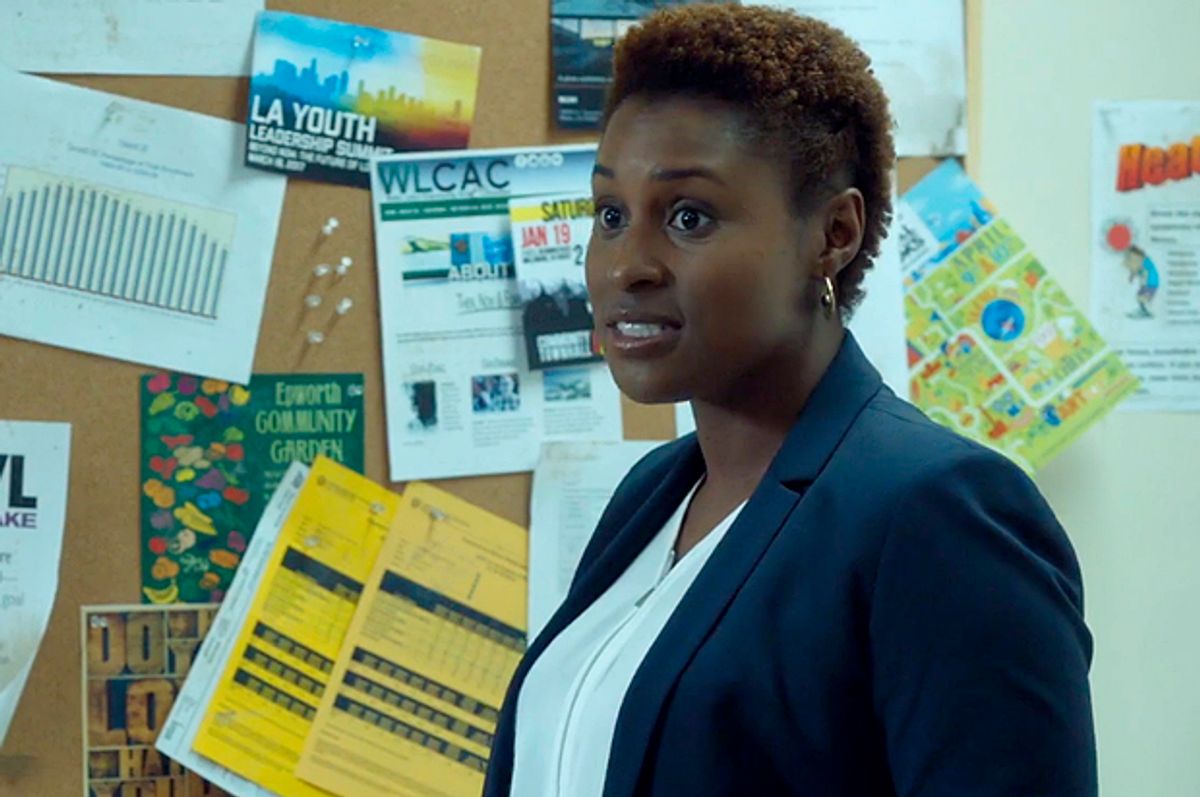 Part of the joy in watching HBO's "Insecure" is in knowing that the show is a culmination of creator Issa Rae's talent, unique comedic voice and even more important, willingness to take risks.

Granted, when "Insecure" is compared with many other series, its basic themes hardly seem risky. Its conceit is quite conventional, actually — a sitcom anchored by a pair of female friends whose relationship is intensely close and, at times, rocky. As I previously wrote in a review, Issa (Rae, playing a fictional version of herself) and Molly (Yvonne Orji) comprise a duo reminiscent of other classic girlfriend pairs that have been celebrated on television series over the years.

The workplace comedy and romantic storylines in "Insecure" follow some of the most standard structures employed in television. And the fact that these elements are so familiar to a wide swath of viewers enables Rae and the show's writers to illuminate the racial politics of office life — particularly as they pertain to the mountain of micro-aggressions African-American professional women must navigate — with invigorating, unapologetic bluntness.

Incredibly well-intentioned, socially liberal white people have likely committed some version of the sins Issa's co-workers commit at the minority youth-focused nonprofit where she works, We Got Y'all. Under the guise of concern, Issa's colleagues trade emails in which they doubt whether she can pull off a simple field trip to the beach. (Once they get there, Issa is the only one who brought enough sunscreen for the kids. "I didn't think they'd even need any," one of Issa's gossipy white co-workers says. Because everybody knows black and brown people don't tan.)

Many white people may not be aware of the double standards applied to black workers in stringent corporate environments like Molly's law firm. Or if they are aware such standards exist, they might not be familiar with how pervasive and subtle they are. Assertive white female professionals have long worried about being perceived as bitchy by male co-workers and bosses. Assertive black women also have to modulate their tone of speech, facial expressions, hair, clothing and language in the workplace so as to not be seen as scary and unprofessional bitches.

Even those tactics don't always translate to respect, compensation parity or career advancement.

"Insecure," airing Sundays at 10:30 p.m., places these tiny aggressive explosions right in the audience's face, mining the utter discomfort of the women enduring it and the perpetrators, resulting in dialogue and scenes that are simultaneously absurdly hilarious and infuriating.

Rae intentionally zeroes in upon that aspect of her characters' stories as a matter of purpose. After all, if "Insecure" is reflective of her experience and those of people like her, it's only fair that she conveys that viewpoint to the audience. Why not? Her excavation of these experiences in her web series "The Mis-Adventures of Awkward Black Girl" is what attracted Hollywood's attention in the first place.

"There's just been so much television where black women are bashing each other, or it's all about the fights or the drama," she told Salon in an interview conducted prior to the show's premiere. "On the opposite spectrum, we're constantly depicted like 'We're fierce,' 'we're flawless,' 'we're superhuman.' But there's never that middle ground of regular people. I like to focus on the regular and the basic, the extremely basic."

The exasperation of the cubicle life is a very basic experience that's relatable for many viewers — especially HBO's subscriber base — although this version is filtered through the specific perspective of a black woman.

"Everyone knows what it's like to work in a corporate office or whether it's a nonprofit, or whatever," Rae observed. "Just working with other people is annoying. . . . But then to be one of the only black people at work; nobody knows what that's like better than us. You either adapt to the situation or you stand out and you're mad."

"And you're mad anyway because you have to adapt, and these white people don't even know that you're adapting, and so they take that for granted," she continued. "They feel comfortable to ask you stupid questions because they're like, 'Oh, you're one of us anyway. You're one of the good ones.' Or you decide, 'I don't care what anyone thinks; I'm just going to show out.'. . . And then you're shunned."

Maybe this gives the slightest credence to Donald Trump's frequent bloviating about black people living in hell. And yes, I am almost entirely joking — almost. For if there is a hell that African-American professionals face, it is less reflective of Trump's references to stereotypes about urban poverty, gun violence and poor education than the variety described by Jean-Paul Sartre.

In other words, Hell is other people — especially people who don't realize that they harbor unsubstantiated fears about their black co-workers.

Sunday's episode pivots around one such prickly situation: Molly's white female boss asks her to talk to one of the firm's summer associates, a gregarious and confident woman named Rasheeda (Gail Bean). Rasheeda's problem is in her refusal to code-switch in the firm's buttoned-down workplace; she's loud, uses casual syntax with her co-workers regardless of race and stands out like a sore thumb.

In last week's installment, Molly diplomatically suggests to the young woman that to be successful, "You gotta know when to switch it up."

Rasheeda is right, of course. If she's doing a fine job, there's absolutely no apparent reason that she should act any other way than she would naturally — except for those unstated rules. And that places an ugly expectation not only on Rasheeda but on Molly.

"I'm not the black translator here to tell the colored folks when Massa say they done wrong," Molly says, while venting to a date after recounting the request of her boss. "Like I'm some house mommy."

"Like you Sam Jackson in 'Django [Unchained']," her date adds empathetically, to which Molly declares, "Right? I'm Django!"

It's hard being Django.

But "Insecure" somehow finds a way to balance what Rae called "the for-us-by-us element of the show" with elements that appeal to the masses — making the show itself a physical manifestation of code-switching. The show has also taken steps to find likable traits in some of its initial offenders; Issa may be forging the start of a friendship with her co-worker Frieda (Lisa Joyce), for example.

"What this show does, and does as second nature, is [show] that there's always layers to what's happening in any of our social interactions. I keep quoting [sociologist and author W.E.B.] Dubois's concept of double consciousness, as in how we are always aware of how we're perceived," Rae said. "That informs . . . a lot of the actions that we have in the workplace."

It also speaks to Rae's awareness of what she's achieved by getting such a raw and honest show on the top premium cable channel: After Wanda Sykes, she's only the second African-American woman to create and star in her own network show. That's a tremendous amount of pressure for anyone to handle.

"It's long hours," she admitted. "But every single time I think about that 9 to 5 I had where the hours would drag, the minutes, the seconds would drag because I wasn't doing what I love. This was like, 'Oh, 16 hours passed already. OK great. On to the next day.'

"When you're working with people you love," she added, "and you're doing something that you've worked so hard for and to even get to this point, it's breezy."