Let them stay on the highway to hell: Sorry, Donald Trump and his supporters do not deserve an “exit ramp”

Yes, we can welcome Trump followers back into the mainstream politics and civilized society. But should we? 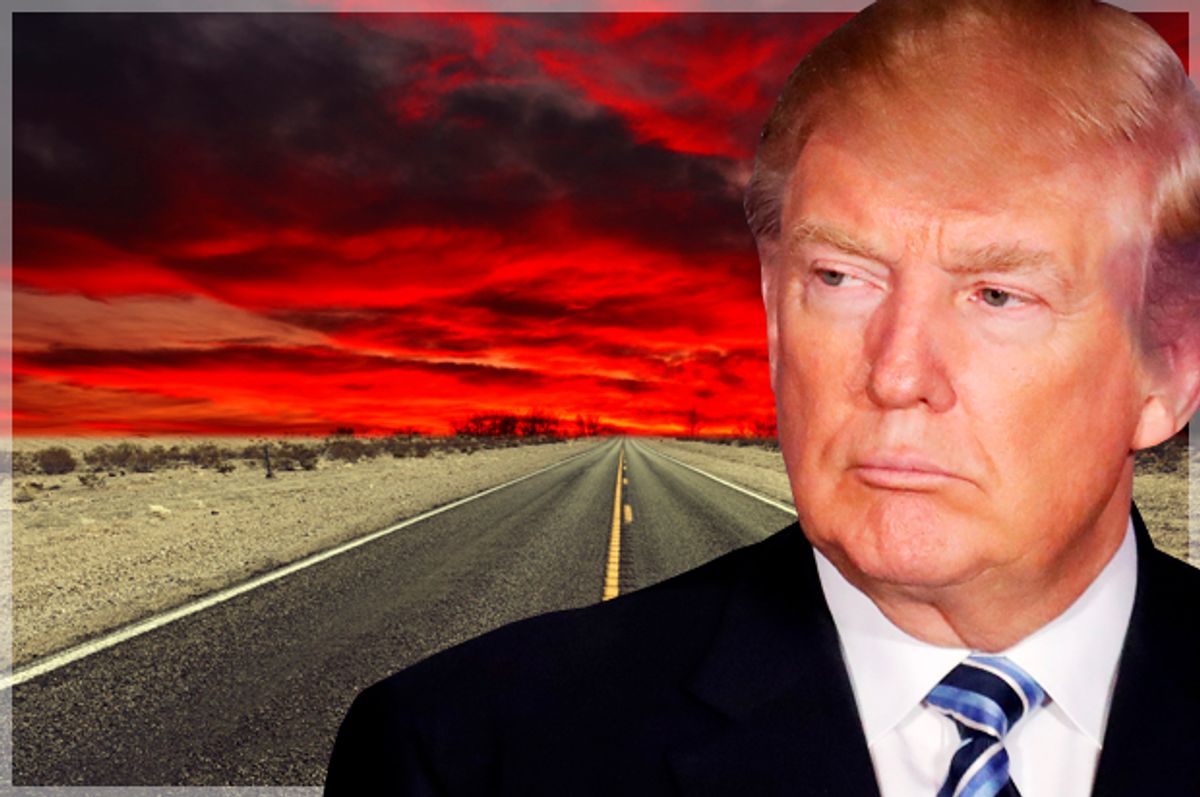 Like so many Americans, I am sick and tired of talking about Donald Trump. At first his presidential campaign was entertaining. It was Andy Kaufmann’s alter ego Tony Clifton mixed with professional wrestling. Trump then amplified the hate and ugliness.

His sick behavior later reached a crescendo with “Pussygate” and the leaked video recording of his admitting to being a serial sex offender. And now Trump’s presidential campaign is like a balloon filled with hot noxious gases that's catching fire as it falls back to Earth, soon to be found discarded like a used condom on a rain-spattered road. The greatest show on Earth is all but over. Only Donald Trump and his minions are in denial of this fact.

But where do we go from here?

It is time to move on and let the healing begin. Even by recent standards in a country whose politics are dysfunction and broken, the 2016 presidential campaign has been extremely mean spirited and polarizing. While no shots have been fired (yet), blood has been spilled by Trump’s brownshirts at his urging and Americans are experiencing a type of pain and stress from their politics — that for many — is both uncommon and uncomfortable. A recent piece in The New York Times described this moment:

The American Psychological Association says that 52 percent of American adults are coping with high levels of stress brought on by the election, according to national Harris Poll survey data released last week. Therapists around the country said in interviews that patients are coming to appointments citing their fears, anger and anxiety about the election.

To help alleviate this stress, Deepak Malhotra, a Harvard University Business School professor, has outlined how we can move forward as a country. In an article titled "How to Build an Exit Ramp for Trump Supporters," Malhotra put forth a series of suggestions for how to bring Trump’s supporters back into the political mainstream. These suggestions include:

Don’t force them to defend their beliefs.

Provide information, and then give them time.

Don’t force them to choose between their idea and yours.

Help them save face.

Give them the cover they need.

Some of the above advice requires that we temper our natural inclinations for how to behave when someone is yelling and screaming or pushing and shoving.  It is well worth building this discipline. Of course, not everyone is ready to change their mind. Equally, not all minds can (or need) to be changed. But you will have a much greater likelihood of navigating the path to change if you invest in building an exit ramp. The election of 2016 is as important a time as any to do it.

Malhotra’s guidelines proceed from a faith in democracy and a belief in the enduring health and quality of America’s political culture. His suggestions are also a excellent example of the concept known as a "Madisonian majority," in which different groups can communicate with one another and where majorities may rule but do not dominate. The idea is that, in a healthy democracy, we must treat each other civilly because there is no guarantee that our political party or group will always be in charge.

In all, Malhotra is very reasonable and generous in his suggestion to build an “exit ramp” for Donald Trump voters — too much so.

The American electorate is extremely polarized and divided. Americans increasingly do not live near, communicate with, or interact with those people that they disagree with politically. This phenomenon is especially acute among conservatives. A state of epistemic closure and an alternate fact-free universe has been created for them by Fox News and the broader right-wing echo chamber.

Consequently, what is known as “information backfire” combines with conspiracy theories to create a firewall against critical thinking and empirical reality. Since the 1950s movement conservatism has functioned as a type of political religion. Donald Trump is the logical outcome of that trend; he is a political cult leader. It will be extremely difficult to deprogram his followers.

A series of public opinion polls and other research has repeatedly demonstrated that Trump’s voters — as a reflection of the Republican Party en masse — are motivated by racism, bigotry, nativism, ethnocentrism and sexism. Trump’s white nationalist movement is also revanchist and reactionary. It did a public service by showing the naive (and others willfully in denial) that racism and white supremacy were not swept from American life by the election of a black man as president of the United States.

Now that small-minded hate is out in the open laid bare for all to see and light is indeed a type of disinfectant. But as America becomes more diverse and cosmopolitan, what place do the people who rallied to Trump’s banner have in this new world?

In American politics there is an expectation that the winner extend his or her hand to the loser in a gesture of cooperation and reconciliation. But what if the loser’s hand conceals a knife? To wit: Barack Obama won two presidential elections by substantial margins. In response, he was met with almost feverish opposition from Republicans who promised to block all of his policies.

Democratic nominee Hillary Clinton is poised to defeat her Republican rival Donald Trump by what has the potential to be a historic margin. Republicans such as Sen. John McCain have already promised to obstruct her presidency and will refuse to follow through on basic obligations of governance — such as allowing her to nominate a replacement for a vacant seat on the United States Supreme Court.

Politics in America have become increasingly dysfunctional in large part because the Democratic Party is chasing an extremist Republican Party further to the right in an effort to find ground for compromise and agreement. In this way, conservatives win by losing. This is contrary to the will of the vast majority of Americans who have rejected the policies offered by the Republican Party and Trump across a range of issues.

I am not a traditional reporter; I am an opinion writer. This frees me from many of the lazy and cowardly constraints of so-called “fairness," “neutrality" and “objectivity” that have hobbled the mainstream corporate news media and its ability to tell the truth about Trump’s fascist movement and the human deplorables who support him.

There have been all manner of metaphors used to describe the 2016 presidential election. For example, the chattering classes speak of “lanes to the White House,” “the presidential horse race" and "roadmaps to victory." Using that logic, the Republican Party, Donald Trump and many of their supporters have chosen their path: a highway to hell. If they are looking for an “exit ramp,” I am not interested in giving them one. I doubt that I am alone in that sentiment.

In his second inaugural address, President Abraham Lincoln famously spoke to a nation in need of healing, saying, “With malice toward none, with charity for all  . . .”

But what if your political opponents have earned your malice and proven undeserving of charity by virtue of their beliefs and actions? This is a question for which there are no easy answers, and yet it awaits us on Election Day in November and the weeks and months to follow.