#ThanksPaul: Bernie Sanders goes all in for down-ballot Democrats, to the dismay of Paul Ryan 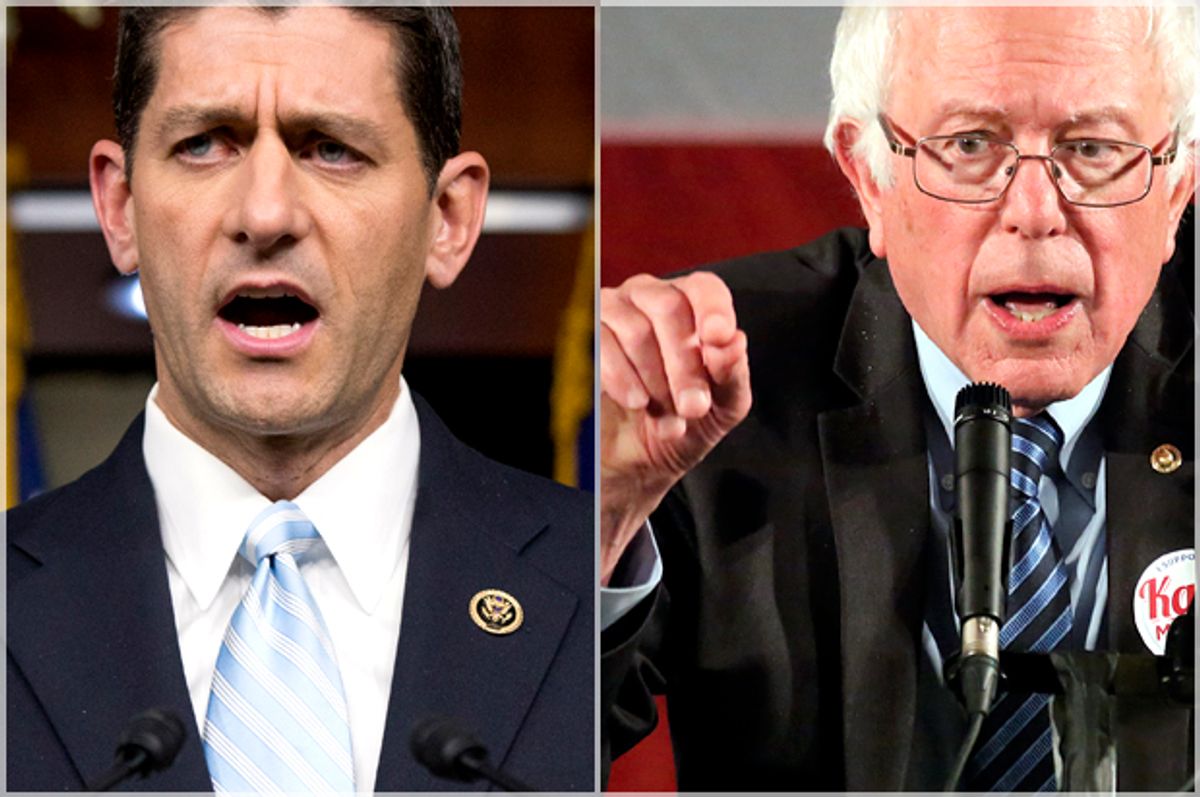 PHILADELPHIA, PA - OCTOBER 8 : Senator Bernie Sanders of Vermont pictured campaigning in Pennsylvania for Hillary Clinton and Katie McGinty where Sanders discussed Hillary Clinton's plan to build an economy that works for everyone, not just those at the top and Donald Trump's plan, which would benefit himself and other millionaires and billionaires like him at Gorshman Hall in Philadelphia, Pa on October 8, 2016 photo credit (AP/Andrew Harnik/Mediapunch)
--

Less than two weeks before the election, Bernie Sanders is again revving up his massive small-donor fundraising network and the congressional Democrats down-ballot he's helping have Paul Ryan to thank for it.

The Vermont senator, who remained an independent until joining the Democratic Party to compete in the presidential primary, telegraphed shortly after ending his bid for the White House that he would redirect his juggernaut of a fundraising operation to some of his favorite down-ballot Democratic candidates.

Apparently fearful of the power of Sanders to swing Congress to the Democrats, House Speaker Paul Ryan used the prospect of the self-described Democratic Socialist in a congressional leadership role as a way to scare up votes for Republicans.

“If we lose the Senate, do you know who becomes chair of the Senate Budget Committee?" Ryan asked a group of Young Republicans in Wisconsin earlier this month. "A guy named Bernie Sanders. You ever heard of him?”

It's no surprise Ryan targeted his anti-Sanders message directly at young Republicans. A May Gallup poll found that while Sanders is the most popular American politician, the progressive populist trailed GOP presidential nominee Donald Trump by seven points in favorability among conservative millennials.

And as the Nation's John Nichols pointed out, Ryan is right to worry that Sanders will likely end up in leadership if the Democrats win control of the upper chamber:

The senator from Vermont is the ranking member of the budget committee, and if Democrats gain control of the chamber on November 8, he would be in line to chair it. But Sanders could also end up chairing then powerful Senate Health, Education, Labor, and Pensions (HELP) Committee, which he could use to advance many of the proposals (for affordable college, empowering unions, and investing in public-health programs) that made his bid for the Democratic presidential nomination so popular.

“He will chair a significant committee if we win the majority," New York Senator Chuck Schumer, who is set to replace retiring Senate Democratic leader Harry Reid of Nevada, said of Sanders.

Instead of having to work with Sanders at the helm of the Senate budget committee while attempting to pass his much-hullaballooed budget, Ryan described to the Young Republicans what he'd much prefer.

“If we keep control of the Senate in the Republican hands . . .  a nice guy named Mike Enzi from Wyoming is the Senate budget chair and he helps us get these budgets to the president’s desk, gets these tax bills through,” Ryan told the crowd.

That was all Sanders apparently had to hear to fire up his base.

Sanders used Ryan’s words as a rallying cry, giving his supporters a tangible reason to back other progressives and Democrats running for office this fall.

In just three days last week, the Vermont Senator brought in over $2.4 million dollars from 500,000 contributions to help 13 Democratic Senate and House candidates with a fundraising email that pointed directly to Ryan’s comments, his staff announced.

The hashtag #ThanksPaul was started by Sanders and his staff to draw attention to Ryan's warning in multiple fundraising solicitations.

“That sounds like a very good idea to me,” Sanders said of Ryan's dire prediction in one email. “It means that we can establish priorities for working people, and not just the billionaire class. What would be equally exciting is if the Democrats took back the House, and Congressman Ryan was no longer speaker.”

During his historic primary run, Sanders often elicited the idea of a grassroots political revolution that would "transform America." So it is understandable why Ryan is so fearful of a populist uprising transforming Congress. The Cook Political Report noted Tuesday that Democrats are poised to win up to seven seats in the Senate and up to 20 seats in the House this cycle, just as Republican presidential nominee Donald Trump has reportedly halted his fundraising on behalf of down-ballot Republicans.