An insult to FDR: Donald Trump's proposed "New Deal" for Black America is an affront to Roosevelt's civil rights legacy 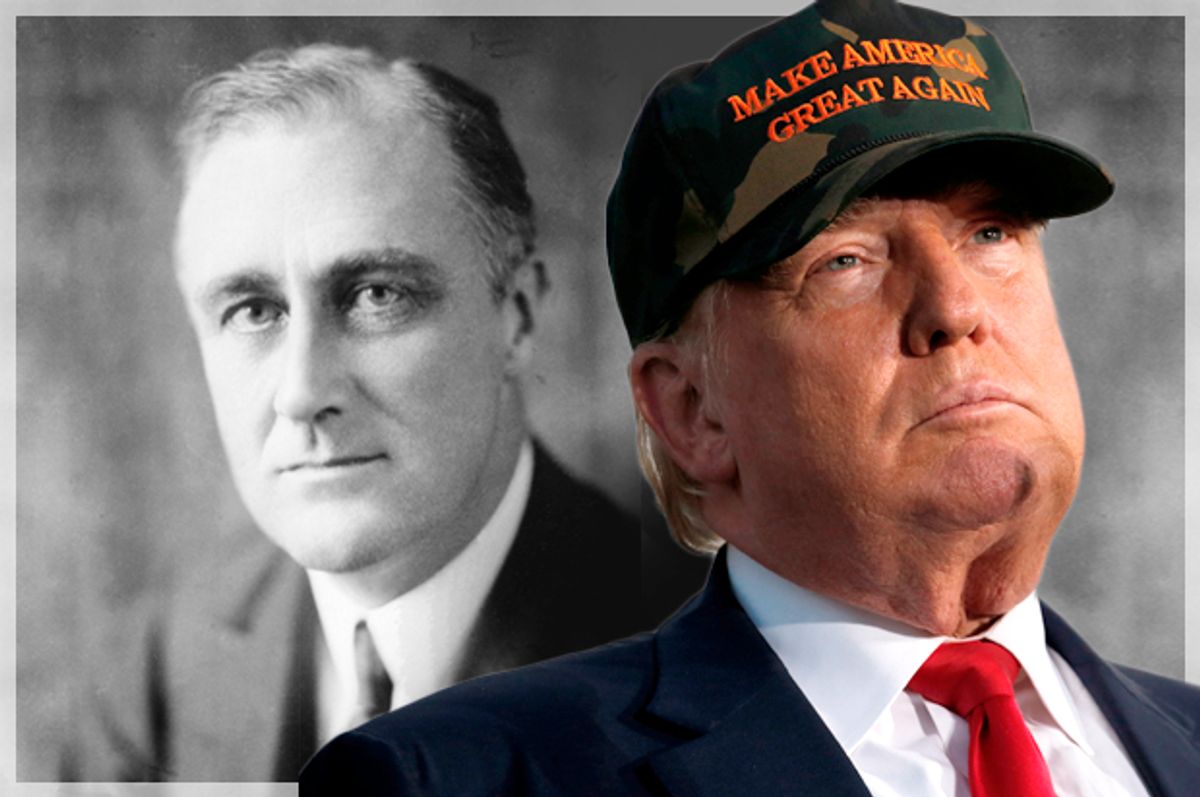 Donald Trump is an odd fellow. He publicly claims to love “the blacks” and “the Latinos," but white supremacists and white nationalists are enamored with him. He brags about his relationships with black people yet his inner circle also consists of members of the racist so-called “alt-right” movement.

He insists on talking about his great plans for America’s “inner cities” and how he will uplift blacks and Hispanics — but does so to audiences that are almost exclusively white and openly hostile towards people of color. And he has a black outreach plan that consists of insulting African-Americans by telling them that their lives are a living hell and how they are losers. Apparently, Trump wants to win black Americans’ votes but one of his closest campaign advisers brags about the campaign’s elaborate plans to suppress them.

On Tuesday, Trump continued this special “love affair” with African-Americans at a rally held in Charlotte, North Carolina.

His newest gesture in this political courtship? He proposed a “New Deal” plan for Black America, which he sold in the following way:

Today I want to talk about how to grow the African-American middle class and to provide a New Deal for Black America. That deal is grounded in three promises: safe communities, great education and high-paying jobs. My vision rests on a principle that has defined this campaign: America First. Every African-American citizen in this country is entitled to a government that puts their jobs, wages and security first.

This is just the beginning because I will never, ever take the African-American community for granted. It will be my mission to prove to this country that yesterday does not have to be tomorrow. The cycle of poverty can be broken, and great new things can happen for our people.

I’m asking America to join me in dreaming big and bold things for our future. Let’s close the history books on the failures in Washington, and let’s open a new chapter of success and prosperity for everyone. I am humbled beyond words to be the nominee for the party of Abraham Lincoln. And it is my highest and greatest hope that the Republican Party can be the home of the African-American vote once again.

Trump’s “New Deal” plan is a failure on multiple levels. First, it does not properly address police brutality. Instead, Trump promises, through what is known as “over-policing,” to further subject black and brown people to unfair and often brutal treatment by the country’s law enforcement officers. Expanding America’s Terrordome over black and brown working=class and poor communities promises more “safety and security” by violating the basic rights of the people who live there.

The Republican presidential nominee's proposal to replace welfare with microloans is vague and makes no attempt to deal with the root causes of poverty in America. His idea to designate America’s urban centers as disaster areas is also ill-conceived, and the monies needed for urban renewal will not be surrendered by Republican elected officials (or Democrats) under the neoliberal austerity regime.

Most important, Trump’s policy prescriptions to improve the lives of black and brown denizens of America’s “hellish” inner cities do nothing to confront housing segregation, racism in the labor market, white flight, a lack of effective gun control laws, and Republicans’ assaults on school funding and other programs, which have created the problems that he promises to correct.

Trump and other Republicans cannot effectively grapple with the problems of inner-city crime and poverty because on a fundamental level they do not respect the people living there as full and equal citizens and partners in the American democratic project.

First Lady Michelle Obama explained this in a devastating rebuttal to Donald Trump’s “black outreach” in a speech last week:

He just doesn’t understand us. . . . Maybe that’s why he calls communities like the ones where I was raised "hell." Because he can’t see all the decent, hardworking folks like my parents, who took those extra shifts, paid their bills on time, folks who are raising amazing families, sending kids to college. Maybe he doesn’t believe people like us really exist because he does not see our shared humanity.

The vast majority of black folks have rejected Trump’s efforts to win them over: Donald Trump is polling at 0 percent to 4 percent among likely African-American voters. This is the very definition of insanity: doing the same thing over and over again but expecting different results.

As I detailed in an earlier Salon piece, it is abundantly clear that Donald Trump’s “black outreach” campaign is actually directed at white conservative voters and serves as a type of smoke screen to obscure his overt racism. There is nothing new or novel about his ploy: Attempting to appear “moderate” on “race issues” in order to distract voters from the racism inherent in modern American conservatism has been a standard strategy for Republicans from the 1960s to the age of Obama.

Yet Trump can't even manage that with any consistency, thanks to his politically schizoid personality. Last Saturday  he journeyed to the Civil War battlefield at Gettysburg, Pennsylvania, and attempted to channel Abraham Lincoln but instead ended up embracing the Confederacy's racist "Lost Cause" ideology.

Now Trump attempts to evoke former president Franklin Delano Roosevelt — who is the blood enemy of conservatives and the Republican Party — with his "New Deal" to win black voters. Trump’s embrace of FDR is ironic as well, whether he knows it or not.

Franklin Delano Roosevelt was beloved by black Americans. His administration fought for civil rights legislation that resulted in such outcomes as desegregation of the war industries and hiring in federal government. His wife, Eleanor, was also instrumental in working for justice along the color line.

As a result of the New Deal and other programs, African-Americans began to earnestly switch their loyalty from the Republicans (the party of Lincoln) to the Democrats (the party of civil rights), a shift that accelerated under the administrations of John F. Kennedy and Lyndon Johnson and has continued through to the present. By comparison, Donald Trump is a fascist and a racist who leads the United States’ largest white identity organization in the Republican Party.

When Roosevelt died in April 1945, Americans of all colors lined the streets in Washington to honor his greatness and memory. In the iconic images that were captured that mournful day, we can see many black Americans, dressed in their best clothing, weeping in the streets.

Trump is no Franklin Delano Roosevelt. Black folks will shed no tears for him — except perhaps tears of joy when he is defeated on Election Day.