"Finally justice can be served": Donald Trump, Republicans rejoice in idea the FBI may be investigating Hillary Clinton again 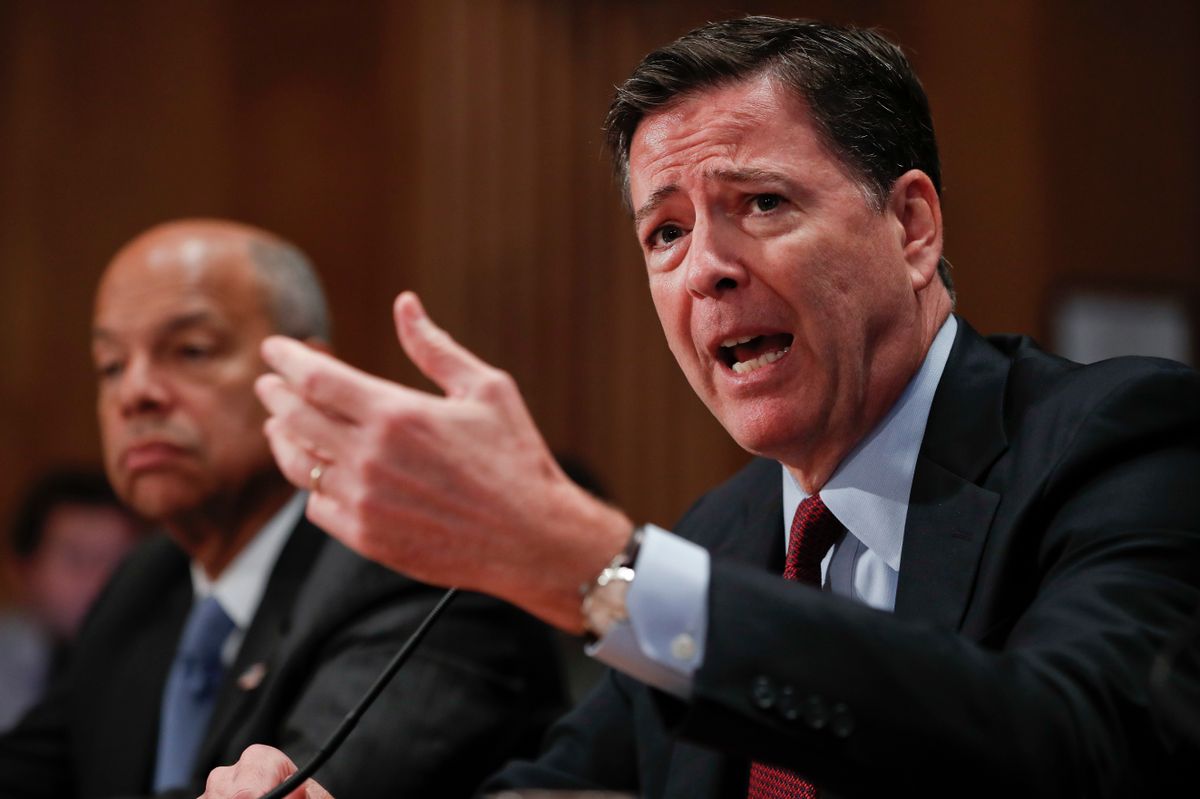 Republicans at first were quick to run with the notion on Friday afternoon that the FBI might be "reopening" an investigation of former secretary of state Hillary Clinton's handling of classified information on her private email server, reversing their tune that the nation's top law enforcement agency had lost its credibility.

The GOP glee mounted after the release of a brief letter from the FBI's director, James Comey, indicating plans to review recently discovered emails that could be pertinent to a now closed Clinton investigation. But the Republicans' joy turned out to be short-lived.

Soon after news of the Comey letter broke, The New York Times reported that the new materials being examined by the FBI had been found on one or more devices belonging to Huma Abedin, Clinton's former deputy chief of staff, and Anthony Weiner, her soon-to-be ex-husband, who is the subject of a separate FBI probe of sexually charged messages that he is alleged to have sent to a minor. This information was not officially provided by Comey, but rather an anonymous source who told the Times that the new emails "numbered in the thousands."

But for a brief spell early on Friday afternoon the Republicans were cheering mightily thinking that the FBI could be "reopening" an investigation of Clinton herself.

At seemingly the exact moment that Comey's letter became public, Republican Jason Chaffetz, the House Oversight Committee chairman, blasted out the news with his own twist.

"FBI Dir just informed me, 'The FBI has learned of the existence of emails that appear to be pertinent to the investigation.' Case reopened," Chaffetz tweeted. Two days earlier he had announced that Republicans are likely to continue investigations of Clinton even if she wins the Oval Office job.

The Republican National Committee echoed Chaffetz' claim the FBI was "reopening" an investigation of Clinton in a graphic tweet:

Minutes later, House Speaker Paul Ryan was once again calling for the Democratic presidential nominee to be barred from receiving classified intelligence briefings.

A giddy Donald Trump took the stage at a campaign stop in New Hampshire within an hour after news broke of the FBI's new look at Clinton emails, suddenly sounding proud of the American law enforcement institution he has bashed for months on the campaign trail.

"I have great respect that the FBI and the Department of Justice are now willing to have the courage to right the horrible mistake," Trump said to a crowd that erupted in cheers of "lock her up!"

Only hours earlier, however, Trump had told Fox News' Bill O'Reilly, "I think the biggest rigging of all is what has happened with the FBI and Justice Department with respect to Hillary Clinton."

But Friday in front of the crowd he was singing a different tune. "They are reopening the case into her criminal and illegal conduct that threatens the security of the United States of America," Trump wrongly told his fans.

Comey's three-paragraph letter did not specify if the FBI planned to reopen its investigation. He had announced in July that Clinton would not face criminal charges for her use of a private email server.

"In connection with an unrelated case," Comey wrote to the heads of eight different congressional committees, "the FBI has learned of the existence of emails that appear to be pertinent to the investigation. I am writing to inform you that the investigative team briefed me on this yesterday, and I agreed that the FBI should take appropriate investigative steps designed to allow investigators to review these emails to determine whether they contain classified information, as well as to assess their important to the investigation."

The FBI director explained that the agency "cannot yet assess whether or not this material may be significant."

As Newsweek has pointed out, Comey's letter to Congress was a required formality:

The truth is Comey didn’t have a choice. Because the new information followed his sworn testimony about the case, Comey was obligated by Department of Justice rules to keep the relevant committees apprised. Under oath Comey had stated that the bureau had completed its review. Once he learned that there were new emails that required examination, Comey had to notify Congress that he had to amend his testimony because it was no longer true.

Of course, with less than 11 days before Election Day, Trump, his campaign staff and other Republicans were eager to pounce on the opportunity presented by the Comey letter.

"Hillary Clinton’s corruption is on a scale we have never seen before. We must not let her take her criminal scheme into the Oval Office," Trump told his raucous New Hampshire crowd on Friday.

And his campaign manager was enthusiastic in her tweet:

A great day in our campaign just got even better. FBI reviewing new emails in Clinton probe @CNNPoliticshttps://t.co/WBltG2lAK6

Trump's running mate called on the FBI to release all of Clinton's emails before the election in 11 days:

"Director Comey's previous half-hearted investigation of Hillary Clinton did serious damage to [the FBI's] reputation, and this latest revelation affords the FBI the opportunity to begin to repair that damage," failed Republican presidential candidate Sen. Ted Cruz wrote in a Facebook message calling on Comey to "demonstrate the courage to uphold the law and restore the integrity of the FBI."

But NBC's Pete Williams pointed, "There is absolutely no way this will be resolved in 11 days."

And Republican Senate Majority Whip John Cornyn, asked, "Why is FBI doing this just 11 days before the election?" The Texas lawmaker has been one of the few Republicans who has remained consistent in his critique of the FBI in light of the new developments.

As is John Weaver, who had been the campaign manager for Republican presidential candidate John Kasich: