Trump's refusal to say whether he'll concede is bad enough; what congressional Republicans threaten is worse 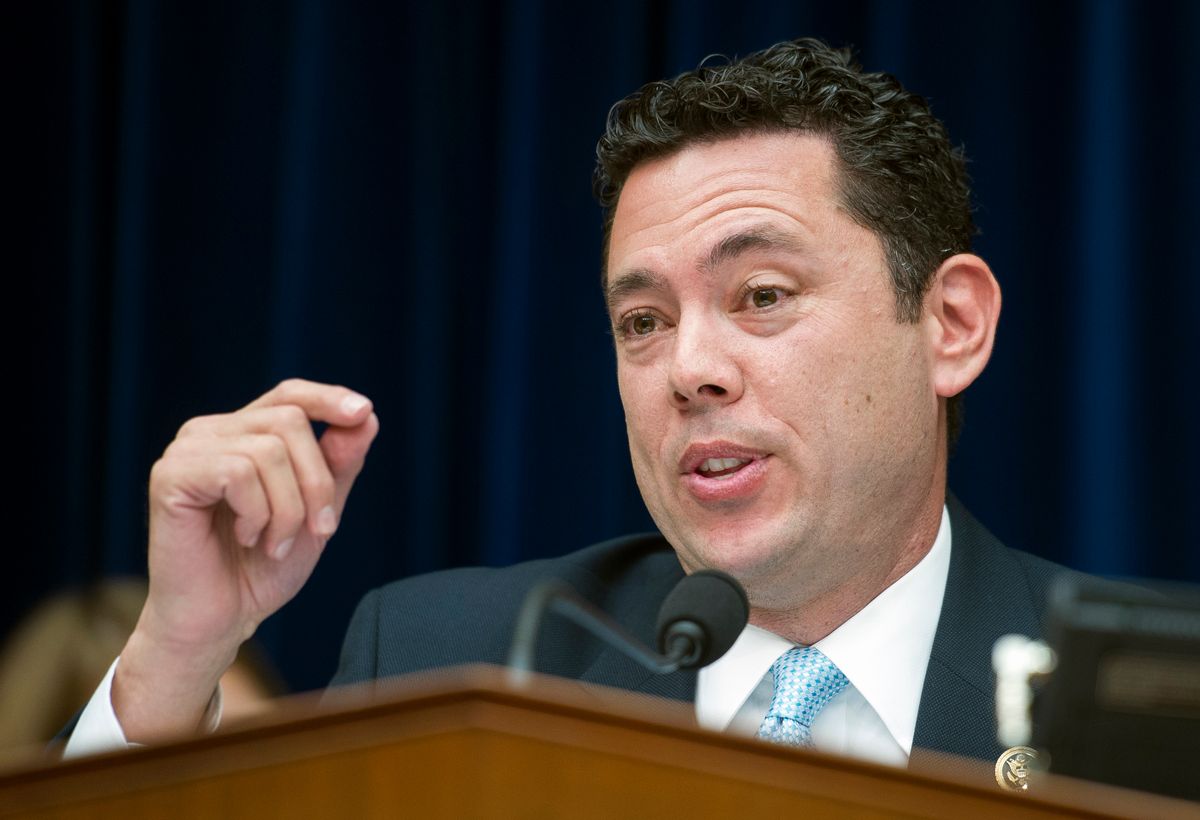 FILE - In this June 16, 2015, file photo, House Oversight and Government Reform Committee Chairman Rep. Jason Chaffetz, R-Utah speaks on Capitol Hill in Washington. A new congressional report says there have been 143 security breaches or attempted breaches at facilities secured by the Secret Service in the last 10 years. The House Oversight and Government Reform Committee report says the Secret Service is an "agency in crisis" after a series of high-profile embarrassments over several years, including a South American prostitution scandal, and multiple security breaches involving President Barack Obama and the White House. (AP Photo/Cliff Owen, File) (AP)
--

Republicans like Rep. Jason Chaffetz of Utah are doing a little distancing-themselves-from-Trump tap dance these days, but don't be fooled: While the small-fingered orange one is especially vulgar about it, his view that politics is little more than an exercise in settling imaginary scores is hardly unique.

On the contrary, Chaffetz and his fellow Republicans have now fully committed themselves to the premise that they should burn the country to the ground rather than accept the legitimacy of a president elected by a coalition of women and people of color.

In an interview with the Washington Post's Dave Weigel, Chaffetz practically glowed with excitement at the possibility of spending the next four to eight years playing the role of a grim-faced Puritan prosecutor, trying Hillary Clinton for witchcraft over and over again.

“It’s a target-rich environment,” Chaffetz said. “Even before we get to Day One, we’ve got two years’ worth of material already lined up. She has four years of history at the State Department, and it ain’t good.”

Republican presidential nominee Donald Trump avenges himself on uppity women by making fun of their bodies on Twitter. Chaffetz prefers the kangaroo court, where he can wallow in false charges and conspiracy theories for years at a time. Why we, as a nation, have concluded that the latter is more dignified than the former is truly a mystery. At least Trump spilling his id out over the internet costs the taxpayers nothing.

Chaffetz is playing this silly game whereby he says he doesn't endorse Trump but is still going to vote for him. Perhaps that's true, although the obvious pleasure the Utah congressman gets from the idea of harassing Clinton over the course of two entire terms in the White House inclines me to think he'll cave and vote the Democratic presidential nominee just to help make his vision a reality.

Either way, the notion that Chaffetz can meaningfully distance himself from Trump is a joke. Chaffetz's ideology is geared toward smashing up the government rather than sharing power. Trump's popularity is due to the same urge. Trump just channels that single-minded vengefulness into a package that's slightly more charming and charismatic. To be fair, there are species of bats more charming and charismatic than Jason Chaffetz.

Speaking of black holes of charm, Sen. Ted Cruz is also chomping at the bit to explain his vengeful inclinations to any waiting reporters. Weigel, who has a talent for making Republican blowhards feel that they're in a safe space, wrote another article this week exploring Cruz's ruminations on his party's not-so-secret plan to thwart the will of the voters.

“There is certainly long historical precedent for a Supreme Court with fewer justices," Cruz told reporters, teasing out the possibility that Republicans will simply never meet their constitutional duty to review a Democratic president's nominee for the court. "I would note, just recently, that Justice Breyer observed that the vacancy is not impacting the ability of the court to do its job. That’s a debate that we are going to have.”

To be clear, he's also claiming there's a "debate" over whether or not congressional Republicans should accept the legitimacy of a presidential election whose outcome they do not like. Ignore all the posturing that Republicans have performed over Trump declining to say whether he'll accept defeat if Clinton wins in November. What Cruz is doing is arguably worse. Accepting Clinton's right to move into the White House is meaningless without also accepting her right to do the job the public elects her to do.

As Ian Millhiser at ThinkProgress wrote, "a threat to confirm no one to the Supreme Court is effectively a threat to destroy the Court itself."

"If the Republican Party insists that it shall be the only party that gets to place new justices on the Supreme Court, that taints the aura of fairness that surrounds the Court," he adds.

Refusing to acknowledge the president's right and duty to nominate Supreme Court justices is, if anything, more toxic than Trump being a pouty baby and not giving a concession speech on the night of Nov. 8. Cruz is hinting at undermining our constitutional system of governance in order to punish the public for not voting the way he would prefer. That is a lot more messed up than Trump's reality-TV-star attention trolling.

Trumpism is terrible, no doubt, but Cruz and Chaffetz remind us that mainstream Republicans pose an even more serious threat to democracy.