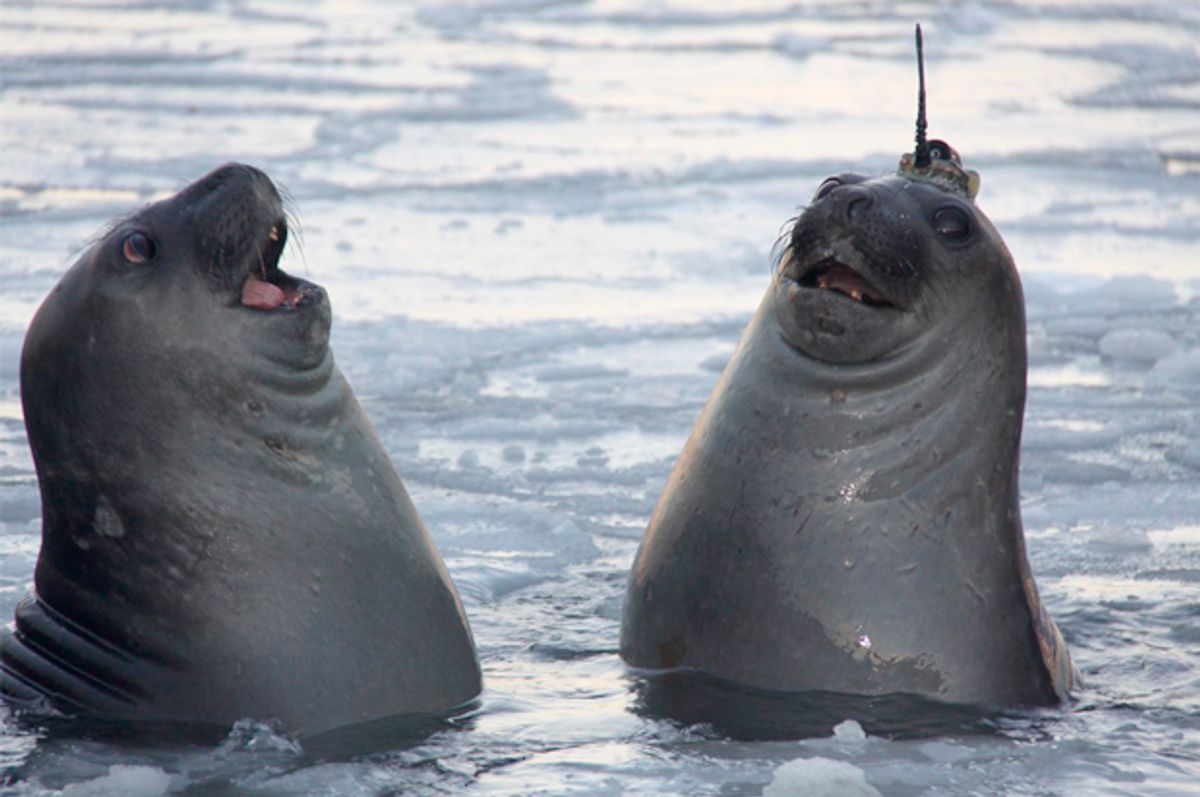 In a viral video released late last year, Koko the Gorilla used sign language to call mankind “stupid” and warn about the dangers of global warming. The video was debunked as a skillful editing job, but it wasn’t so hard to believe an animal of Koko’s intelligence would be pissed about man-made ecological disaster — we’re taking other species down with us. So perhaps it’s only fitting that whales, seals and other imperiled mammals are being recruited by scientists to help save the world from climate change — whether they know it or not. In the fight against global climate change, our collateral damage could become our secret weapon.

We could use the help. If climate change continues unmitigated, global incomes are expected to fall 23 percent by 2100. According to The Nation, the symptoms of global warming -- including extreme weather events, increased disease and greater food insecurity -- will cost the millennial generation in the U.S. alone $8.8 trillion.

Behind this economic disruption is an ecological one. Take the humble jellyfish -- warmer oceans have allowed these gelatinous blobs to thrive to the point of wiping out other marine species, clogging nuclear power plants and doing millions of dollars worth of damage to the fishing industry. More than 300 bird species, necessary for the pollination of our global food supply, are considered threatened by global warming. At the same time, rising temperatures are depleting habitat and forcing desperate wild animals, like snow leopards and great white sharks, into more peopled areas. All of this movement has decreased the biodiversity that underpins our economic activity.

In other words, human actions have disrupted the ecological balance to our own peril. And now, we’re relying on the animal kingdom for help.

Consider the narwhal, an arctic whale whose unicorn-like tusk was believed in the Middle Ages to have healing powers. Partly due to melting ice that’s exposed the endangered cestacean to poachers, the world’s 50,000 remaining narwhals are considered especially susceptible to climate change. But while the creatures struggle to survive, they’re assisting researchers at the University of Washington’s Polar Science Center in assessing temperature changes in Baffin Bay, on the southwest coast of Greenland.

Conditions there — frequent storms and an average January temperature of 4 degrees Fahrenheit — have traditionally made this area inhospitable to human researchers. But scientists at the Polar Science Center, funded by NASA, are able to attach card-deck-sized thermometers to the bay’s narwhals during summertime. The animals are then tracked through winter, when they dive nearly 6,000 feet in search of halibut to eat. Before collecting the narwhals’ initial data, scientists had underestimated the bay’s temperature by nearly 34 degrees.

As Michael Steele, oceanographer with the University of Washington, told the journal Nature, the narwhals are filling a “gigantic, embarrassing hole” in temperature databases relied on by climate forecasters.

Meanwhile, Inuit dogsleds in the Arctic are being custom fit with ice-thickness-measuring devices -- aka, long pipes with GPS and other solar-powered electronics inside. As the sled dogs travel, data about the changing landscape, which is warming twice as fast as the rest of the world, is beamed to researchers and meteorological centers around the globe, and the information is used to create ice maps and determine weather forecasts.

Near the opposite pole,in the Antarctic, elephant seals are also being outfitted with non-invasive data-collecting sensors -- only here, the goal is tracking salinity. In the Antarctic, dense, salty water forms at the bottom of the ocean, and this “bottom water” drives ocean circulation. What the elephant seals have relayed -- before shedding their instruments during the natural molting process -- is that rising temperatures have diluted this salty bottom water. This has disrupted water currents and, therefore, the transport of heat and nutrients around the globe. How this interrupted flow will affect weather patterns is still being studied.

This type of work has huge potential. Monitoring devices on marine mammals alone have already informed 100 scientific studies and more than half a million vertical temperature and salinity profiles around the world. And we can expect to see more animals engaged by science as technology improves. In recent years, the devices have gotten much smaller — some weigh a little more than a gram — and are safe and undetectable to the animals wearing them. They’re also better able than ever to communicate with satellites. This means researchers can collect real-time data without having to capture tagged animals a second time.

“It is ironic that we’re relying on the same animals we’ve endangered,” Sara Iverson, PhD, Executive Director of Canada’s Ocean Tracking Network, told Salon. Under Iverson’s direction, the research center uses electronic tags to track over 100 commercially important species, including gray seals and northern fur seals, in 20 countries and 16 ocean regions. “But I think it’s also a recognition, perhaps, of past ignorance. These animals can tell us a great deal about the environment, how it’s changing and possibly how to fix it. It’s a concept that is really just beginning to be embraced and recognized for its value. And it really is a win-win situation. The animals are providing information for us about the environment and themselves, while at the same time allowing us to better manage and conserve animal populations in the ocean.”

But not all animals have to wear a gizmo — or live in the ocean — to be helpful. Take the hyrax, a native of Africa and the Middle East that looks like a stubby-eared bunny. A creature of habit, it prefers urinating in the same place, usually a rock surface, as often as possible. As this dried urine -- which contains plant traces, pollen, and gas bubbles -- builds up and fossilizes over thousands of years, it provides hints about how the planet’s biodiversity has changed over time. One study sample is 55,000 years old.

“We are taking the piss, quite literally,” project leader Brian Chase of France’s Montpellier University told the Guardian. “And it is proving to be a highly effective way to study how climate changes have affected local environments."

But no matter how many animals we enlist to study a changing earth, or how much data we glean from them, it’s unlikely they’ll ever fully understand their contributions. And yet, as was the case with Koko the Gorilla, it doesn’t make the message she signed any less true: “Time hurry. Help earth. Nature sees you.”