One nation, "weaponized": What this in-vogue verb tells us about our divided culture

To "weaponize" once meant to arm an object for destruction. Now it means we're all potentially ticking bombs 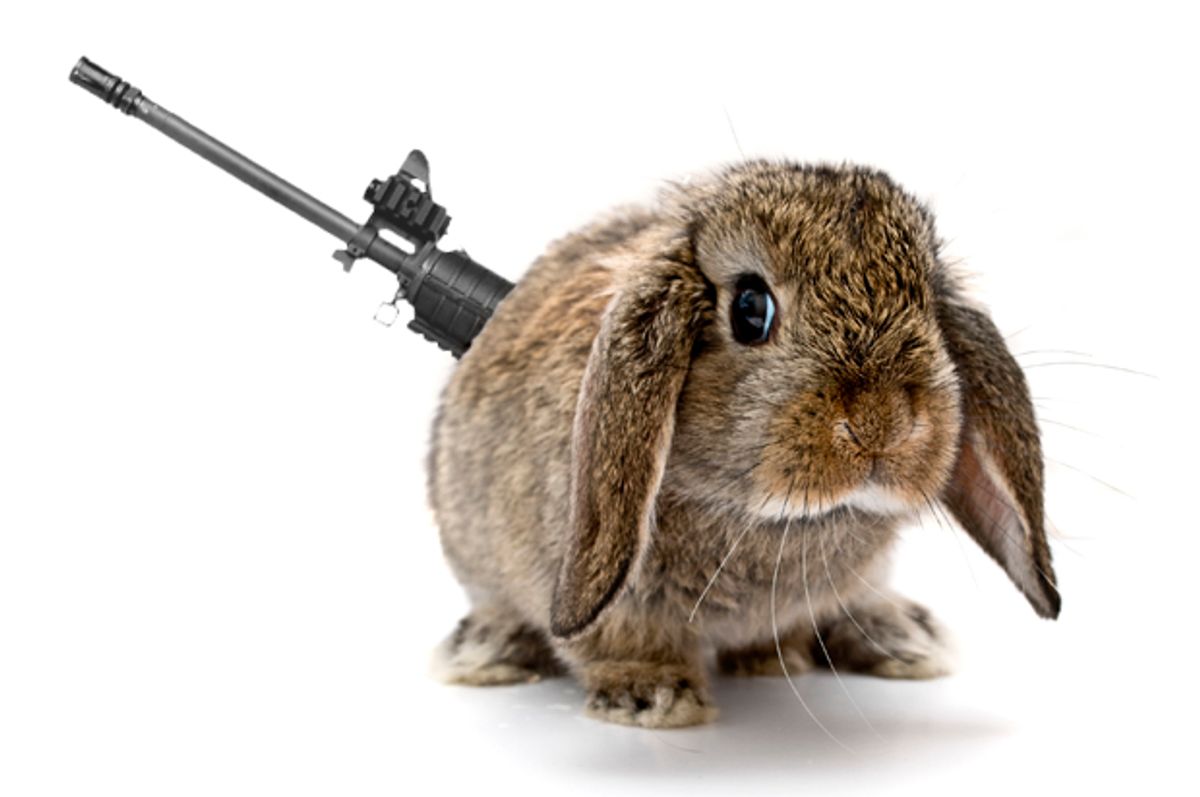 Lately I’ve been thinking about this nerdy “Calvin and Hobbes” comic strip I used as a bookmark back in school. “I like to verb words,” Calvin proclaims to his buddy. Hobbes, ever the straight man, is confused. “What?”

“I take nouns and adjectives and use them as verbs. Remember when ‘access’ was a thing? Now it’s something you do. It got verbed,” Calvin says. “Verbing weirds language.”

Hobbes catches on to the anarchic mission, musing, “Maybe we can eventually make language a complete impediment to understanding.”

Even if that's not your aim, I’ve long felt that "verbing" is a particularly satisfying way to weird the English language. So when I noticed that writers had moved from using "weaponized" to describe things that actually can be armed and transformed into literal weapons — like uranium, drones, anthrax or 007’s Aston Martin — to "weaponizing" personality traits, abstractions and ideas, I had a new obsession.

I saw it first in an excellent deep dive into the the clown prince of the alt-right, Breitbart technology editor and professional troll Milo Yiannopoulos, by Laurie Penny, who spent an evening with him during the Republican National Convention in July. Penny describes the alt-right’s prominence during this election cycle as “what happens when weaponised insincerity is applied to structural ignorance.” Here Penny offers the most concise and evocative explanation I’ve read of how a bunch of Twitter trolls basically hijacked the GOP, and it’s a killer line to boot. I wasn’t the line’s only admirer; it’s the most-frequently highlighted passage in Penny’s well-circulated Medium post.

The next day, the New Yorker  published a blistering takedown of Ivanka Trump’s role in her father’s presidential campaign by TV critic Emily Nussbaum, pegged to the well-received speech Ivanka delivered at the RNC the night before. “Ivanka’s made the choice to use her gifts to prop up her father’s ugly and xenophobic campaign, employing her charm as a kind of weaponized graciousness,” Nussbaum wrote. “The R.N.C. on TV: Ivanka’s Weaponized Graciousness” is the headline.

After Nussbaum’s essay, I started noticing abstract nouns, values and personality traits “weaponized” in headlines and columns across the media spectrum.

This rash of figurative weaponizing goes back at least a few years. My favorite early example is a 2009 Harper’s story about a couple of academics who jokingly applied for funding from Lockheed Martin to study the weaponization of irony. If they had only waited five or six years, they might have gotten the money.

But despite its militarized, Second Amendment-glorifying tone, anyone on any side of the political spectrum can weaponize just about anything, apparently. Here at Salon, we’ve weaponized Jesus, hatred, Donald Trump’s platform, and the geek-culture canon. We haven’t weaponized friendship yet, but a fresh crop of Taylor Swift takes are due any minute now.

Generosity can be weaponized, according to the Progressive, in a story about “how L.A.’s 1% disrupt democracy and dismantle the public school system” through philanthropy. So can immigration — not immigrants! — according to conservative think-tank blog Frontpage, with its story on “Hillary and Weaponized Immigration: How international terrorists would turn Clinton's ‘compassionate’ immigration proposals against us.”

The term shows up on Reddit, in both the academic GenderCritical forum and the Red Pill, a Men's Rights Activist hangout characterized by the Daily Dot as “one of its darkest corners.” A discussion sparked by “Thoughts on weaponized femininity?” delves into gender essentialism, while a Red Pill post invites readers to consider a “Harper’s piece revealing how Hillary Clinton has weaponized feminism to extend the reach of the banks.”

An essay on the Establishment, “Why I’m scared of white women,” describes how white women have “weaponized whiteness against Black men and other men of color in a way that exploits racist cultural ideas of criminality.” On the other end of the political spectrum, an op-ed in the East Bay Times claims “gay rights activists have weaponized the concept of ‘tolerance,’” apparently by refusing to tolerate intolerance in public institutions.

The term has been gathering steam for the last two or three years, and now it seems all things weaponized are having a moment. The cover of the Atlantic’s November tech issue teases a story on “How Social Media Got Weaponized,” which ends up being a bit of an outlier, since the story is about how online platforms are used in actual — not metaphorical — wars.

Once you become aware of the weaponizing, you might start seeing it everywhere.

Peter Sokolowski, a lexicographer and editor-at-large at Merriam-Webster, tells me this is called the recency illusion, where “you only notice the things you just noticed.”

He says this after admitting that when he received my request to talk for this story, he hadn’t noticed that weaponizing was a thing. So he asked a colleague about it, and “literally within moments” he saw an example in his Twitter feed.

“Truthiness has become fully weaponized,” he reads to me. “In the New York Times today.”

In Sokolowski’s own digging, he found one example from 2006, in an ahead-of-the-curve Los Angeles Times article (“Media strategists have spent the last five decades weaponizing TV”) and two from 2013 — “weaponized hate speech” in the Albuquerque Journal and “a DA’s office ‘becoming weaponized for political purposes’” in the Fond du Lac, Wisconsin, Reporter.

“Now we’re talking about the New York Times, the New Yorker,” he says. “Much bigger readership. That’s how it works.”

“This is becoming a metaphor, and we’re watching it happen in real time,” he adds.

So why this word, and why now?

Sokolowski tells me the verbing of “weapon” dates to the 1950s, during the Cold War, but the practice itself is an old one. English pamphleteer and poet Thomas Nashe (1567-1601) was the first to be credited with using the -ize suffix to verb a noun or an adjective in English. It effectively Latinizes — see what I did there? — English words, making them sound more professional or technical. (There are 872 “-ize” verbs in the Merriam-Webster dictionary. Anyone who’s ever worked in corporate America has likely been incentivized to do a little verbing.)

“Technical words are all words that came into the English language after the Norman Conquest, at a time when the French-speaking population in England was ruling and giving the laws and enforcing them,” says Sokolowski. “Embedded in our language to this day is an absolutely crystal-clear model of the social structure of England circa 1200.”

It works. A weapon is dumb and blunt (from the Middle English wepen), but to weaponize — well, it’s both smart and sexy, like when James Bond pays a visit to Q to get outfitted with the latest spy gadgets. So it’s no wonder writers like it. There’s a futuristic sleekness to the word that feels precise when we’re trying to make sense of a rapidly changing, media-saturated, identity-driven cultural landscape. The "velocity and ferocity," as Sokolowski puts it, of the last year and a half of presidential election coverage is a factor.

"We need new and energetic language to describe this particular pattern of campaigning, which is a little bit new to all of us," he says. "It’s not surprising to me to see a little hyperbole in the rhetoric."

This particular use of "weaponize" points to the possibility that we didn't need language itself to become, as Hobbes the tiger wished, an impediment to understanding. We're already there. Now everyone is potentially a threat, to be assessed as either ally or enemy and treated accordingly. Despite the vast differences in ideology and priorities between the left and the right, there is one thing we can apparently agree on: Anyone with an identity, personality or opinion is armed and potentially dangerous. And if the apparent surging popularity of weaponization -- that's a noun verbed, and then re-nouned -- is any indication, we're not likely to pass into an era of understanding any time soon.