Are there secret "Westworld" robots?

Salon's gambler's guide to who is really human, and who is not, on HBO's ambitious science-fiction show 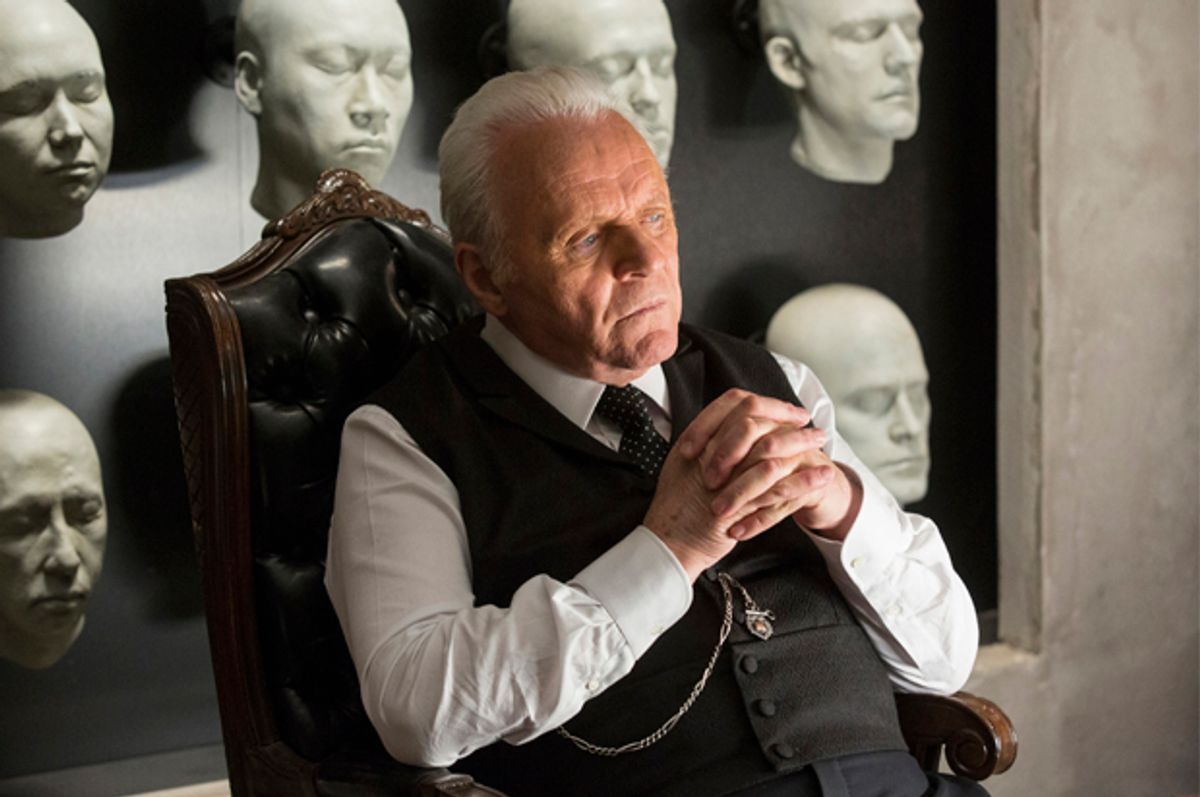 The premise of HBO’s “Westworld” takes a long-standing tradition in science fiction and turns it on its head. This isn’t a case of creatures created by man acting up and threatening the earnest humanity of the heroes — as they’ve done from Mary Shelley’s “Frankenstein” through Ridley Scott’s “Blade Runner” and beyond. There’s some awakening by the robot “hosts,” but they are in many ways more decent — even, in the case of bordello owner Maeve (Thandie Newton), more human in some senses than the actual human beings. The humans — “guests” who come to the Westworld theme park to indulge their fantasies and desires — are often selfish, violent and governed by simplistic urges, just like robots from classic Golden Age science fiction.

Creators Jonathan Nolan and Lisa Joy are also breaking from the 1973 Michael Crichton movie that loosely inspired their series: In the original “Westworld,” you could tell the difference between humans and robots by the palms of their hands, but there is no similar “tell” in the new “Westworld.”

This ambiguity — who is human and who isn’t? and what does it mean? — has been a part of science fiction for a long time, and was explored especially well by Philip K. Dick, whose novel led to “Blade Runner.” (Some now speculate that Rick Deckard, the bounty hunter played by Harrison Ford, was actually an android, a kind of unconscious race traitor.) But rarely has it been handled with the nuance and tension with which it’s treated on “Westworld.” Besides the philosophical implications, the issue of is-he-or-isn’t-he has a life-and-death meaning for the show’s plot: Robots cannot — at least, if their programming is working — kill or even harm human beings.

So in this spirit, here is our list of which of the purported human beings on the show may actually be robots. (Though I’ve watched the first six episodes, I will reveal nothing beyond the four that have already aired.) See you at the gambling tables.

Elsie Hughes (Shannon Woodward) works in the park’s programming department, where she tries to fix the robots’ errant behavior. She's one of the youngest characters in the park’s hierarchy and has the air of a go-getter and straight arrow. If she’s human, she was a dedicated hall monitor who ratted on her friends for cursing in elementary school, became an officer in her sorority, and grew into the officious, ass-kissing co-worker who beat you out for a promotion. (This was all, of course, before she joined the staff at Westworld.) But she’s so rigid and rule-obsessed she seems likely to be at least a cyborg. Robot quotient: 50 percent.

Bernard (Jeffrey Wright) helped design the robot hosts, and is the intellectual captain behind Westworld as well as, perhaps, its moral center and conscience. In his dogged, scientific, slightly repressed way, he’s also one of the few characters with recognizable emotions like world-weariness, concern and ethical confusion. So you can almost hear Alanis Morissette (or Jimmy Fallon and Justin Timberlake) shouting “Ironic!” if this most human of the characters turned out to be a robot. Perhaps park founder Robert Ford made him in the laboratory so he would not need to worry about his most important lieutenant going off script the way human beings sometimes do? As a thematic and plot twist, this would be hard to pull off, but not impossible. Robot quotient: 30 percent.

Theresa Cullen (Sidse Babett Knudsen) runs the park’s operations. She has the weight of the world on her shoulders much of the time, and deals with it with a kind of Nordic impassivity. (The actress is Danish and the character speaks with a hint of an accent.) She is in some ways the most classically robotic character in the show — icily rational to the point of heartlessness. Could she really be a robot? Well, do robots reveal themselves in sexual encounters? If so, we’d have to ask her surreptitious boyfriend, Bernard. This one could go either way — making her a robot would be a bit obvious, but would also be fun to work out. Robot quotient: 25 percent.

Lee Sizemore (Simon Quarterman) is the slender British-accented “narrative director” of the park — he writes and coordinates the stories through which the guests and hosts interact. Could he be a robot? Who cares? He just seems like an ass. Robot quotient: No comment.

William (Jimmi Simpson) is a shy, sandy-haired gentleman who’s dragged to the park by his much rougher co-worker and brother-in-law, Logan. He’s one of the first sympathetic characters in the show, following Bernard and Maeve — he’s both an audience surrogate (new to the park, a bit wide-eyed, a bit appalled) and a decent fellow who embodies a traditional idea of humanity. Having him turn out to be a robot would be a great, startling, hot-take-generating turn — for about one news cycle. After that, it probably would not be very interesting to contemplate or work out onscreen. Given how smart the show’s plotting has been, this seems dubious, but not impossible. Robot quotient: 20 percent.

The Man in Black (Ed Harris) is nearly as mysterious as Ford, the park's founder. But we do know that he had a life in the outside world, even though he's been coming to the park for a long time and seems to be disappearing into its maze. He also does a lot of shooting and killing, which would break a robot's programming edict unless his has been seriously jacked. But he's so odd and inexplicable, anything is possible. Robot quotient: 15 percent.

Dr. Robert Ford (Anthony Hopkins) is a laconic, philosophical British scientist who created the park. Westworld, we’ve come to think, did not exist before he dreamed it up. Otherwise, we know little about him, though we get hints throughout, and little glimmers about his old, deceased and even more-mysterious partner. If Ford, who clearly has an enormously complex emotional world behind the focused stare and formal manner, is a robot, it throws everything into the air. It could open up a fascinating Season 2, for instance. But sheesh, it just seems really hard to fathom, and could the show pick up all those pieces? Robot quotient: 10 percent.

Logan (Ben Barnes) is the fun-loving, black-hatted bachelor bro who takes his brother-in-law William into the park, aiming to to kill and copulate with as many robots as he can. Violent, self-indulgent, mean-spirited, entirely devoid of envy or sympathy, he could only come from one place: contemporary American manhood. Only the white-male one percent (and perhaps the fraternity system) could produce a douche like this. Robot quotient: 0 percent.