In a TV age that gives us "Empire" and "Transparent," the sitcom's depiction of the LGBT community is out of date 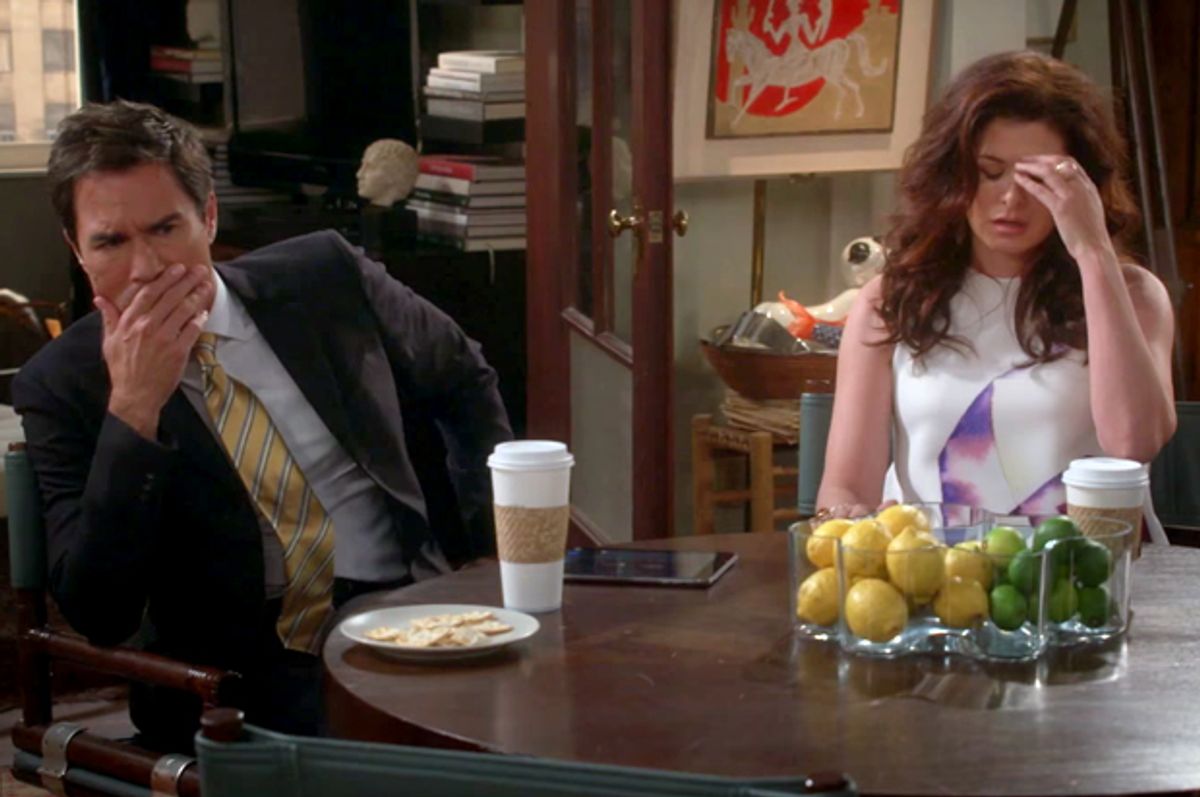 Start practicing your Cher impression, everyone: “Will & Grace” is reportedly coming back to TV.

The NBC sitcom, which ran for eight seasons on the Peacock Network, is in talks to return as a limited series following fan excitement over a viral video in which the characters reunited to endorse Hillary Clinton. In the nine-minute segment, Will (Eric McCormack) and Grace (Debra Messing) are horrified to discover that Karen (Megan Mullally) is a Trump supporter, while Jack (Sean Hayes) is still on the fence. The reunion was so well received that it stirred up interest in a full-fledged revival — similar to the recent reboots of Fox’s “24” and “The X-Files,” as well as Netflix’s forthcoming “Gilmore Girls” special.

Eighteen years after the show premiered, “Will & Grace” remains a trailblazer. As the first sitcom to feature a gay male lead, the program has been cited as a major turning point in shifting America’s views toward the LGBT population. Vice president Joe Biden famously said of the show, “I think ‘Will & Grace’ did more to educate the American public than almost anything anybody has ever done.” Among the top 20 most-watched shows for four seasons, its enormous popularity paved the way for “Queer Eye for the Straight Guy,” “Modern Family,” “Glee” and “Looking,” as well as television’s flourishing queer renaissance. If there was no one like Will on TV in 1998, there are dozens of characters today who bear his distinct imprint.

Even while recognizing the cultural impact of “Will & Grace,” its narrow, insular view of the LGBT community is extremely out of touch with the progress queer people have made since it debuted. LGBT representation, which today includes such programs as “Transparent,” “How to Get Away with Murder” and “Empire,” has come a long way in depicting the wide spectrum of diversity that comprises the queer umbrella. While “Will & Grace” may have helped open the door to allow those stories to be told, its existence in the TV landscape is no longer necessary.

Just months before “Will & Grace” debuted on television, Ellen DeGeneres made history — and paid the price for it. The stand-up comic famously came out in a cover story for Time, telling the magazine: “Yep, I’m gay.” Her character on “Ellen” followed suit in the show’s third season, coming out in 1997’s “The Puppy Episode.” Ellen Morgan (DeGeneres) develops feelings for a free-spirited producer, Susan (Laura Dern), thus realizing that she’s a lesbian. Although Susan, who is also queer, is spoken for, the two share a poignant moment when Ellen attempts to come out to her at the airport and accidentally broadcasts the declaration over the intercom.

The episode, which features a fleeting kiss between its female stars, was hugely controversial. JCPenney refused to sponsor it, and DeGeneres received death threats after “The Puppy Episode” was broadcast. She was even stalked, followed to her car by angry fans. The headlines garnered huge ratings for ABC, drawing 42 million viewers, but the show’s audience rapidly eroded after Ellen Morgan’s lesbian epiphany. “Ellen” would be cancelled less than two years later.

Following the show’s implosion, network executives were skeptical of greenlighting another program that would test America’s queer tolerance. “Will & Grace”—about the codependent relationship between a heterosexual woman and a gay man—was based on executive producer Max Mutchnick’s relationship with his own real-life best friend. Execs often asked why Will Truman, a lawyer reeling from a recent breakup, couldn’t just be straight. But following the success of “The Birdcage” and “My Best Friend’s Wedding,” there was hope that gay farces could sell on television. Will and Jack were clearly cut from the Rupert Everett mold—white, attractive and witty, always ready with a snappy comeback.

What made “Will & Grace” so popular is also one of the many reasons it proved divisive among LGBT viewers: The show puts forward a view of gay men that’s extremely non-threatening to straight audiences. “Will & Grace” upends comic tropes by making sex between its leads impossible, instead positing gay men as the perfect companions for straight women. Will and his longtime friend, Grace Adler, do all the things that married people do—reading the paper together, drinking coffee, and discussing their feelings. But as the show’s tagline reminds viewers: “They’re not a couple. They’re a couple of best friends.”

Will and Jack are chaste and sexless. The idea that they have intimate lives is hinted at, but seldom explored. Jack McFarland, a flighty theater queen who loves scarves and worships Cher, is never in a relationship for more than an episode. Will, a long-suffering singleton, doesn’t get a steady boyfriend until the show’s sixth season, when he gets together with Vince D’Angelo (Bobby Cannavale). Any hint of sexual tension between the two friends is played for laughs, as when Jack and Will drunkenly wind up in bed together on a Caribbean cruise. Don’t worry, though! Nothing happened.

“Will & Grace” also struggled with respectability politics. Jack, who was memorably described by Entertainment Weekly’s Ken Tucker as “Paul Lynde trapped in the body of Daffy Duck,” is a classic sissy character. Jack—vapid, self-interested and effeminate—is so swishy that he’s a one-man conga line, a counterpoint to the more “straight-acting” Will. When he asks Grace if she knew Jack was gay when they first met, she retorts, “My dog knew.” Jack is the butt of the joke, not someone you should want to be like. Will—with his handsome, leading-man looks—is presented more aspirationally.

What makes the show good, and sometimes great, is how it gradually upends these stereotypes by making its gay heroes both flawed and lovable. If the sissy character is usually presented with the depth of a thimble (see: “Brüno”), “Will & Grace” allowed Jack to grow in dimension and in soul—akin to Emmett on “Queer as Folk” or Cam on “Modern Family.” Outfest, the nation’s largest LGBT film festival, recently presented its Legacy Award to Hayes. Christopher Racster, the executive director of Outfest, argued that the portrayal was deeply empathetic: “Jack lived in a land where it was OK to simply be Jack—open, honest, funny, and real.”

Those tensions—between tearing down stereotypes and simply reinforcing them—were emblematic of the burden of representation during a TV era when there were few LGBT characters of any kind. If its viewpoint toward someone like Jack feels contradictory, that’s because “Will & Grace” was allowed such a limited view of the queer life in general. The show had no recurring lesbian or transgender characters, and its foray into bisexual representation was an unmitigated dumpster fire. Will briefly begins seeing a cute pastry chef, Edward (Stuart Townsend), who also has eyes for Karen. Will doesn’t understand how this could be possible, referring to bisexuality as a “rest stop on the highway to homo.” Because bi people just can’t help themselves, Edward ditches them both to have sex with Karen’s maid, Rosario (Shelley Morrison).

So much has changed since 1998, partially because shows like “Will & Grace” and “Queer as Folk”—which were very white and male—helped create greater demand for the kinds of stories that weren’t being told. In the early aughts, there was “The L Word” and “Noah’s Ark,” cable shows that depicted the fraught interpersonal dramas between lesbian and black gay male friend groups, respectively. ABC’s button-pushing “How to Get Away with Murder,” which features an interracial gay relationship, marked the first time that analingus was shown on broadcast TV—frankly and without apology.

Flaws and all, “Will & Grace” helped start a conversation about LGBT lives on television when even the possibility of a gay kiss was taboo. While Shonda Rhimes has claimed it was next to impossible to get ABC to greenlight a steamy lesbian shower scene—presented as a fantasy—back in 2007, “Modern Family” fans were upset that Mitchell (Jesse Tyler Ferguson) and Cam (Eric Stonestreet) didn’t kiss sooner. Outrage about same-sex intimacy, the kind that spelled doom for Ellen DeGeneres two decades ago, is almost nonexistent today. In 2015, Freeform’s “The Fosters” featured a gay kiss between two 13-year-olds (played by Gavin MacIntosh and Hayden Byerly), the youngest such lip-lock in history. Backlash was minimal.

“Will & Grace” will forever stand as an important milestone in the fight for LGBT acceptance, illustrating the importance of bringing queer people into America’s living rooms. Although Biden was perhaps hyperbolic in his praise for the show, his wider point rings true: By showing the humanity of gay men like Will and Jack, the show compelled viewers to see their gay friends, neighbors and family members as more human. But in 2016, the tolerant, accepting America “Will & Grace” fought for simply doesn’t need it anymore.

Lgbt Tv Will And Grace