The monsters we create: On Stephen King's "It," the creepy clown epidemic and Donald Trump

Humans need to name and see abstract horrors, so we "monsterize" people who embody those fears 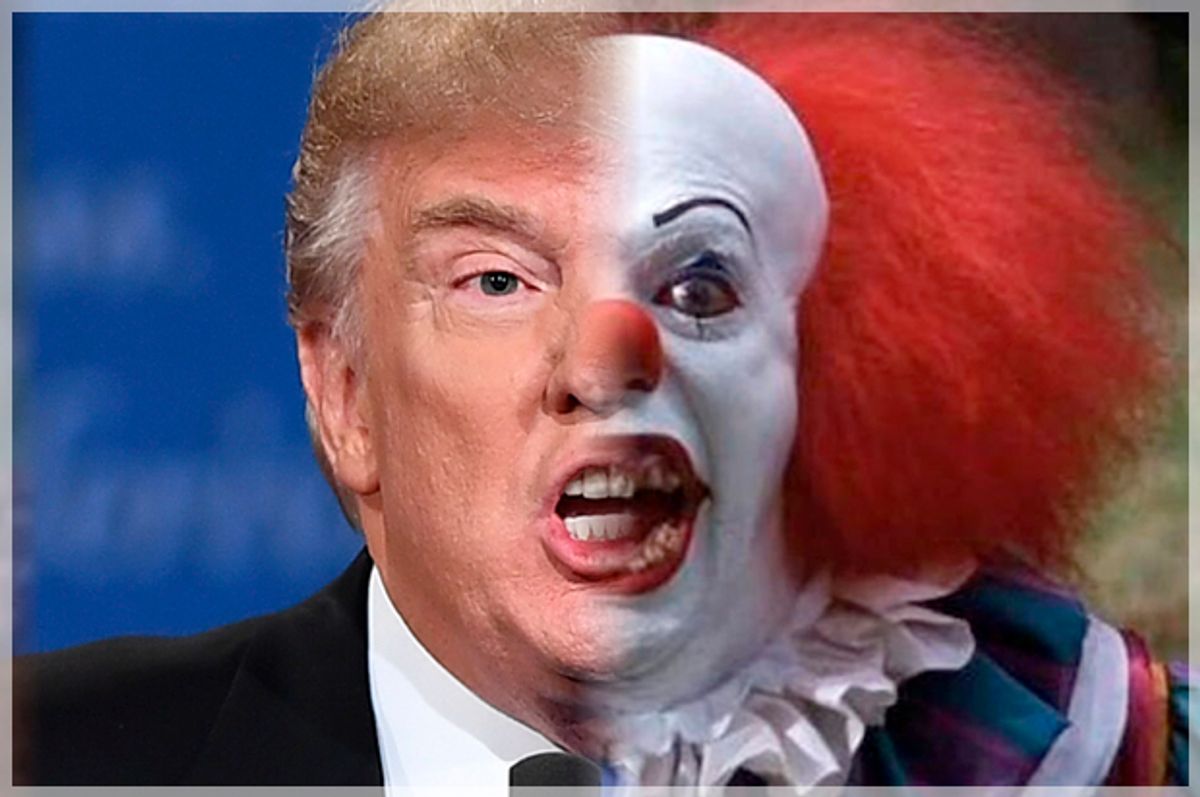 We’ve got a creepy clown problem. Not just in the U.S., with weirdoes lurking in the woods in scary clown costumes and harassing passers-by, but even in the small Slovenian town in which I live. The locals are almost certainly some doofus copycat teenagers who have not read Stephen King’s "It," but the U.S. originals seem to be overzealous fans who just can’t wait for the 2017 film version of that brilliant monster novel to hit the theaters. But that this phenomenon has inspired copycats in the rural Alps suggests that creepy clowns have become an archetypal monster category, perhaps in the same sphere as the cliché monsters we know and love (well, maybe love isn’t the right word, we’ll get to that): werewolves, vampires, zombies, ghosts, mummies and reanimated corpses (a la Frankenstein’s monster). If you’re in that sort of mood, you can insert your preferred Donald Trump joke here.

Psychologist Carl Jung described archetypes as universal characters or symbols in the human imagination, regardless of one’s background, that project or describe some basic human need. There’s a reason that dragons, in one form or another, exist in every human culture, and ghosts, too. Can we add creepy clowns to this list? They are certainly what Freud would call unheimlich, uncanny, in the straddling of opposites — clowns are supposed to entertain us and make us smile at the circus, but they are often painted with frowns. I, for one, have never seen a clown that either entertained me or made me smile, but maybe I’m an old fuddy-duddy. If so, Stephen King is, too; in an interview, he said he chose a clown for his villain’s main form in "It" because he thought clowns scare children “more than anything else in the world.” The “horrorization” of something quotidian, intended for children, and (at least theoretically) fun and happy and funny is a powerful, disconcerting potion. I’ve already written of my abhorrence of dolls (the more life-like, the more grotesque I find them), and clowns are in the same category. I don’t need them with fangs and wielding chainsaws — I find them creepy enough au naturel.

But our local clown problem, despite the absence of Halloween in Europe, combined with the current election, got me thinking about monsters. The way murderous clowns, or even sexually aggressive presidential candidates, are described by the general public warrants a bit of investigation. Because, when you really think about it, we humans need monsters.

Let’s talk about the sociological explanation for the origins of monster stories. On the one hand, we have the phenomenon of contorted storytelling, a combination of “I caught a fish THIS big” with the children’s game of Telephone. Take the sea-dwelling monster called the Kraken. It’s described as a giant squid, before mariners knew of actual giant squid as a legitimate species. Very occasional sightings of real giant squid, when compared to the miniature versions that were common on the plates of coastal diners for millennia, were given a name, Kraken, and a legend of breaking apart ships with snaking tentacles. The legendary Yeti, or Abominable Snowman, is most likely the exotic Tibetan blue bear, spotted on its hind legs. But travelers unfamiliar with the fauna of the Nepalese mountains might have seen, through whipping winds and clots of snowfall, what appeared to be a biped reared up in the distance, or perhaps even growling before them, and from the logical explanation of a bear was bred the Yeti legend.

As in the game of Telephone, the legend expands with the telling, passed from mouth to ear and onward. A six-foot giant squid becomes a 60-foot squid, hearing a growl in the snow-veiled mountains becomes having been chased by a Yeti. And so encounters with real natural phenomena are expanded into legendary monsters.

The second side of the sociological triangle is the very human need to have an answer for open questions. It’s much harder to just not know why Bobbi Sue dumped you before prom than to come up with an explanation, any explanation. The word “define” literally means “to set boundaries against,” as in to box up our understanding, pen it in. We feel more in control when we exert control over something, to feel that we understand it. Our ancestors invented rational explanations for inexplicable phenomena, because not knowing what thunder is was worse than thinking that it was the roar of a colossal dragon. By extension, not knowing what happens when you die is far worse than believing in an afterlife — even if the afterlife, if you are naughty, is full of fearsome Boschian demons.

Then came the Enlightenment, and with it a slow shift from supernatural explanations to those that could be scientifically verified. This shift is perhaps best embodied in the person of Baron Janez Vajkard Valvasor, a naturalist and publisher living in what is now Slovenia in the 17th century, a candidate for the most interesting Enlightenment genius you’ve never heard of. His great masterpiece, the encyclopedic "Glory of the Duchy of Carniola," is a broad but deep study of the folklore, biology, geography and culture of his homeland (he was also the first to publish the story of a specific vampire, named Jure, in case you were wondering). In it, we find him wrestling within his own mind between supernatural and natural explanations for phenomena he encountered. Valvasor was accepted into the Royal Society in London, thanks to his publication on the hydraulics that make Lake Cerknica disappear. For half the year, Cerknica is the largest lake in Slovenia, but it quite quickly drains into the porous limestone terrain on which it sits, and the entire lake becomes a pasture, only to flood again every year. His investigation of the vanishing lake explored local folklore, which attributed its movement to the work of witches who he believed, as did the locals in the territory, engaged in cultic rituals atop the mountain that overlooks the lake. In Valvasor, we see someone who takes for granted the supernatural as a part of life, but at the same time seeks a scientific explanation for what he sees, not dismissing the supernatural as impossible, but wishing to consider natural explanations that shift the supernatural to the sidelines.

The third explanation owes nothing to truth or the natural world. It is allegorical. A monster hybridized not of various animals, nor of snowballing stories, but built out of ideas.

In our industrialized world, one in which electricity has sidelined our once universal fear of darkness, in which the forest is not a den of wolves and bears but a generally safe place for a stroll (particularly with GPS and phone signals available on almost every square mile of the planet — provided the number of creepy clowns per square mile is limited to less than one), we can now choose to be frightened, to enjoy monsters. Adrenaline is no longer a means of survival, but an on-off switch, something in which we can choose to indulge, with thrillers and roller coasters. Monsters are to be feared only as a source of entertainment. This is a relatively recent phenomenon, one born of city-dwelling (when the only real monsters were disease and other people), electricity (for light banishes fear), and, most modern of all, universal connectivity, which makes it far more difficult to actually get lost or to be unable to call for help, wherever you may be on the planet.

And so we’ve come to choose our monsters, and to have a light hand in who or what we tar with this particularly feathery word.

It’s easier for us to toss away Nazis as a collective evil, a sort of plague that the heroic Allies extinguished, forgetting that every Nazi was a human being, impregnated with degrees of goodness and ill, taking bad orders and deciding what to do with them, often following them, because not to follow them would go against our natural tendency toward self-preservation. We hybridize them. Nazis were half-human, half-demons, the stories of their atrocities, which in reality needed no exaggeration, spread orally like wildfire. They are representative emblems of pure evil. But in actuality they are only so in our collective imaginations. Each Nazi was a person who made decisions in a trying situation. A human, for better or worse. To “monsterize” them is a defense mechanism, distancing them from us, we who are “good,” and defining them, to avoid the indefinite, the unknown, which scares us more than anything. We do the same with Donald Trump (as he and his fans try, with little success, to do with Hillary Clinton). To monsterize, to horrorify, to make terrifiable. It helps us to feel that Nazis or members of ISIS or Trump are somehow “other,” dismissable, understandable in the context of life only as cartoon contortions of reality. To do this saves us from the notion that they are more like us than we like to think, that they are merely misguided humans, that we might carry a monstrosity within us. But we all do. It's just that most of us have a well-oiled superego to keep that carnivorous, cannibal id in check. We then turn to monsters to explain away bad things, to let off steam or, in the case of Trump, to speak the unspeakable on some of our behalfs.

Monsters are there to make life easier for us, at least within the confines of our minds. For we are the monsters — they are only what our minds project. That’s why Stephen King’s tale of the evil clown Pennywise is so brilliant. He gets it. The titular monster, It, takes the form of whatever a child fears most, most often Pennywise, and It feeds on the fear of those it kills. For liberals, Trump does the same thing — he embodies their greatest fears, but to make his reality less devastating, the liberal media (myself included) “defines” him in two-dimensional, cartoon terms. For his supporters, he projects what they wish they could say, but common decency and good sense (usually) prevent it. For his opponents, it is easier to dismiss him as a two-dimensional monster who will soon be buried beneath a landslide election. But once he’s gone, who knows what form It might take next?