What's not being voted on this November: Local democracy is being squashed from coast to coast 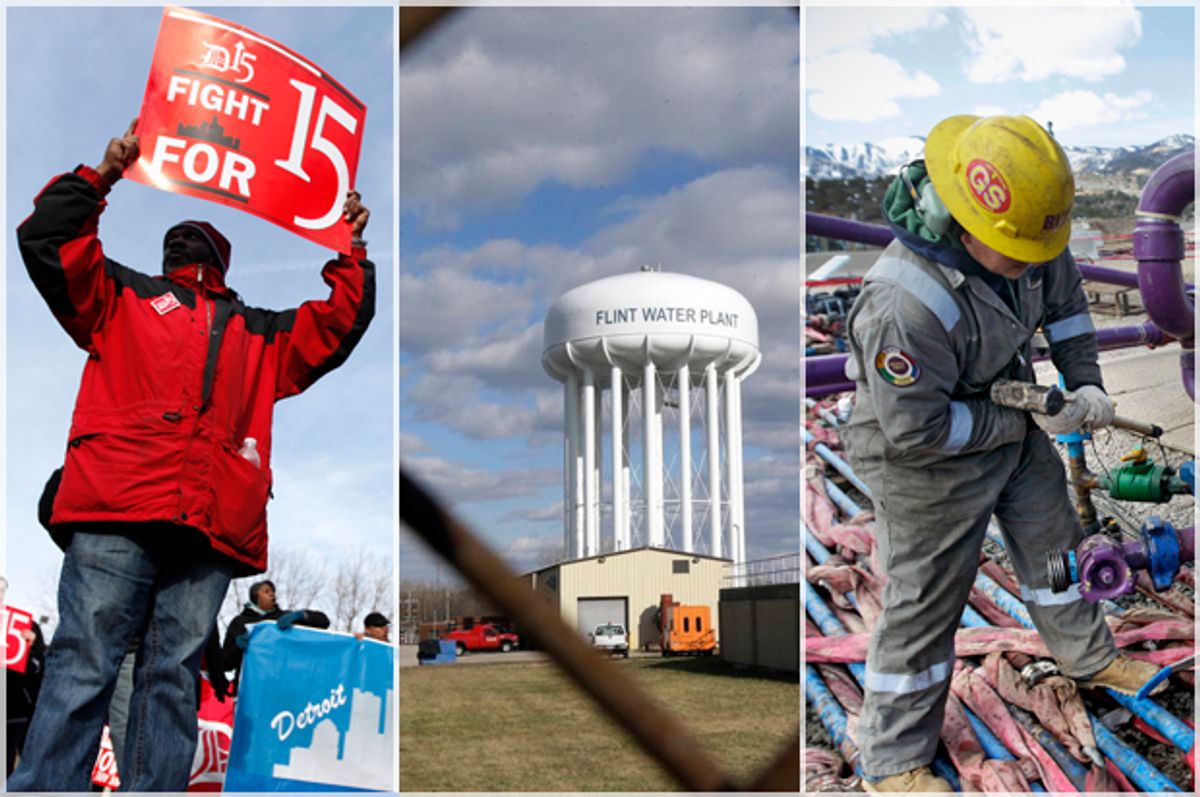 FILE - This March 21, 2016 file photo shows the Flint Water Plant water tower in Flint, Mich. After months of national attention on lead-tainted drinking water in Flint, many are starting to ask questions about a 74-mile pipeline being built from Lake Huron to the struggling former auto manufacturing powerhouse. The $285 million project is rooted in political ambitions and long-simmering resentment toward Detroit, which for decades had near-total control of the city’s water rates. (AP Photo/Carlos Osorio File) (AP/Paul Sancya/Carlos Osorio/Brennan Linsley)
--

People across the country have turned to the local ballot initiative process — by which citizens write, petition for and vote on legislation — to push the needle on key legislative battles around fracking, the minimum wage, police reform and many other issues. The response of state legislatures, wary of local activism, in passing state “preemption” laws to remove “local control” is well documented.

Less well known, however, is the role of courts and city governments in barring local citizens from even bringing these issues to a vote. In fact, the very power of local direct democracy to effect change on these contentious issues is in the crosshairs.

Despite petitioners collecting sufficient signatures, at least nine local ballot initiatives in Minnesota, Ohio and Washington state have been removed from November ballots. There are almost certainly other examples. Often the mere possibility or threat of state preemption is used as grounds to stop a duly qualified initiative from being voted on. Here are several of the more prominent examples.

Petitioners in Minneapolis turned in 15,000 signatures this summer to place a measure requiring police officers to carry professional liability insurance on the ballot. The city would pay the base rate for the insurance, but officers would be responsible for any additional premiums that result from their misconduct. The concept has been likened to medical malpractice insurance: It would hold police officers personally responsible for misconduct and take that burden off taxpayers. But the city council refused to place the question on the ballot because, the city claimed, the measure conflicted with state law. Outraged at being denied the chance to vote, the petitioners appealed the decision to the Minnesota Supreme Court.

The court indeed found that the measure is “preempted by state law and, therefore, is improper.” Though logical in one light -- why pass a law that courts will just strike down? -- this argument flies in the face of the very tenet of direct democracy, as embodied in the ballot initiative. The initiative process is a mechanism for citizens to circumvent their elected officials and the courts. Allowing city representatives to veto a proposed initiative based on its substance, as the Minnesota Supreme Court has done here, is antithetical to the purpose of the process.

The police insurance measure was not the only initiative removed from Minneapolis’ 2016 ballot. So was a $15 minimum wage measure. Again, it was the city council that kept it off the ballot. And again, the state Supreme Court ruled in the council's favor. Business interests argued that cities are preempted from raising the minimum wage, and therefore the $15 wage, like the police insurance question, could not be put to a vote. But there is no clear precedent for minimum-wage preemption in Minnesota; the court took a different approach, instead arguing that the “city’s charter does not grant citizens the right to vote on policy decisions, instead vesting that power in the hands of the City Council.” This is arguably a much more far-reaching and damaging precedent for the power of the local ballot process.

Dave Bicking, chair of the Committee for Professional Policing, the group behind the police insurance initiative, maintains that the denial of local direct democracy is nothing out of the ordinary in Minnesota. "The norm, based on the Minnesota Constitution and the resulting laws, is that ballot measures are not subject to judicial review before they are placed on the ballot," he said. "The norm based on historical practice, however, is quite the opposite.

“The city engaged in several illegal maneuvers to delay the processing of our petition," Bicking continued. "So that is our experience: Two ballot initiatives in 2016 that were illegally (we believe) denied their place on the 2016 ballot. Based on [this] experience, and on the Supreme Court decision, we have to conclude that there is virtually no chance that change can come from any grassroots-supported ballot measure.”

Nearly 1,700 miles to the west, similar arguments were made in Tacoma to keep a duly-qualified ballot measure off the ballot. The measure would have required all new city and corporate projects using at least 1 million gallons of water per day to be put to a public vote. It was the latest form of opposition to industrial waterfront projects such as a methanol plant. In the decision, a trial court judge sided with the city, the Port of Tacoma, the Economic Development Board of Tacoma-Pierce County and the local chamber of commerce in keeping it off the ballot, claiming the measure conflicted with state law.

This was a direct reassertion of a precedent-setting decision by the Washington Supreme Court earlier in the year. In that decision, the court overturned a century of legal precedent in removing a Spokane initiative from the ballot. Before this year, Washingtonians could propose and vote on laws through the local ballot process, even if they conflicted with state law. In other words, until 2016, the legality or constitutionality of a ballot initiative was determined after it became law, not before. Thanks to the state court decision, pre-election judicial review can now be used to strike initiatives from the ballot.

“This pre-election challenge cause of action is entirely a judicial construction,” said Lindsey Schromen-Wawrin, attorney for the petitioners in Tacoma and Spokane. “Nowhere do the people, or even the state legislature, authorize a judicial veto of a duly-qualified initiative.”

On the eastern side of the state, in Spokane, citizens filed a "Right to Climate" charter amendment initiative that would have banned coal and oil trains from the city. That measure was the latest in a decade of Spokane ballot activism aimed at corralling corporate power.

But the Spokane City Council declined to put the measure on the ballot, despite support from the community's leading environmental groups. Instead the city council voted to put its own regulatory measure on the ballot that would tax the coal and oil trains. After political pressure was placed on city government by the relevant corporate interests, it folded entirely and rescinded that initiative too. Nothing will appear on Spokane’s 2016 ballot concerning fossil-fuel trains.

Four counties in the Buckeye State — Medina, Portage, Athens and Meigs — gathered signatures to qualify measures for the November ballot that would have banned fracking, frack-waste injections and fracked-gas pipelines, including the proposed NEXUS pipeline that would transport 1.5 billion cubic feet of gas per day. All those measures were removed from the ballot.

It was a repeat of 2015, when Ohio Secretary of State Jon Husted — known for his attacks on early voting — claimed “unfettered authority” in reviewing and removing local ballot measures. Though his argument was struck down by the Ohio Supreme Court in 2015, the court opened the door to another technical pre-election challenge process. That requirement was used to keep four 2015 county ballot measures off the ballot. Petitioners regrouped this year, but lacked guidance from the state on how to satisfy the requirement. Husted and the court again used the requirement to keep the measures off the 2016 ballot. Husted organized a fundraiser with the Ohio Oil and Gas Association this spring. Perhaps that was coincidental.

When those signatures were turned in, the city clerk refused to count them. The petitioners argued that this refusal was a violation of the clerk's administrative duty, but their appeal was dismissed by the Ohio Supreme Court. When all was said and done, a watered-down version of the measure has been scheduled for the May 2017 special election ballot.

Throughout this whole process, an elephant sat in the room; as signatures were being gathered, Ohio Attorney General Mike DeWine issued an advisory opinion arguing that because the state has never explicitly conferred on municipalities the power to raise the state minimum wage, cities have no power to do so.

In Lane County, Oregon, petitioners are in a four-year-long fight to vote on local ordinances that would outlaw corporate GMO agriculture in the fertile county. This year, an ordinance was proposed to give county commissioners authority to remove initiatives that are not “of county concern” or have been preempted by the state legislature -- such as the management of GMO agriculture.

At the time of publication, Highland Township, Pennsylvania -- population 490 -- faces a challenge from its own supervisors to keep a proposed home-rule charter off the ballot. The charter would reassert a ban on frack-waste injection wells that was rescinded by the supervisors after a fracking company called Seneca Resources sued the township. A court decision is expected soon.

This list of initiatives offers a glimpse into how meaningful local direct democracy can be suppressed in the United States. Though the specific mechanisms vary, in all the cases described above courts or city halls have taken it upon themselves to waive the democratic process altogether. Rather than put these issues to a vote, citizens are told they don’t possess the technical authority to vote, and the forum for decision-making is moved from the ballot box to the courtroom.

But the fact that a proposed ballot measure aims to change or overturn established law — the fact that it technically violates established law, in other words — should not be sufficient reason to strike it from the ballot. In fact, initiatives that challenge established law — whether that be the dominant minimum wage, the practice of fracking or the legal structures that privilege private corporations — embody the very purpose of direct democracy, which is supposed to give citizens an avenue to express themselves when their representatives won’t.

Rather than working to strike down the initiatives once they become law, those opposed to these measures have decided that the most expedient approach is to avoid the voting process altogether. Striking down democratically adopted laws, they may fear, would prove unpopular. Instead, the integrity of the democratic process itself is jeopardized.

According to the Minneapolis Star Tribune, critics of the local minimum wage plan feared that “putting the issues on the ballot would open the doors to policymaking by referendum in cities across Minnesota.”

This list is what one under-resourced freelance writer was able to cobble together on the run. By no means is it exhaustive. If you know of other examples, be in touch. Follow me at @SimonDavisCohen or email me: s.davis.cohen@gmail.com