All is lost: Peter Thiel paints a poor picture of America in justifying his support of Trump

In a National Press Club speech, Thiel defended his support of Trump by listing everything wrong with the U.S. 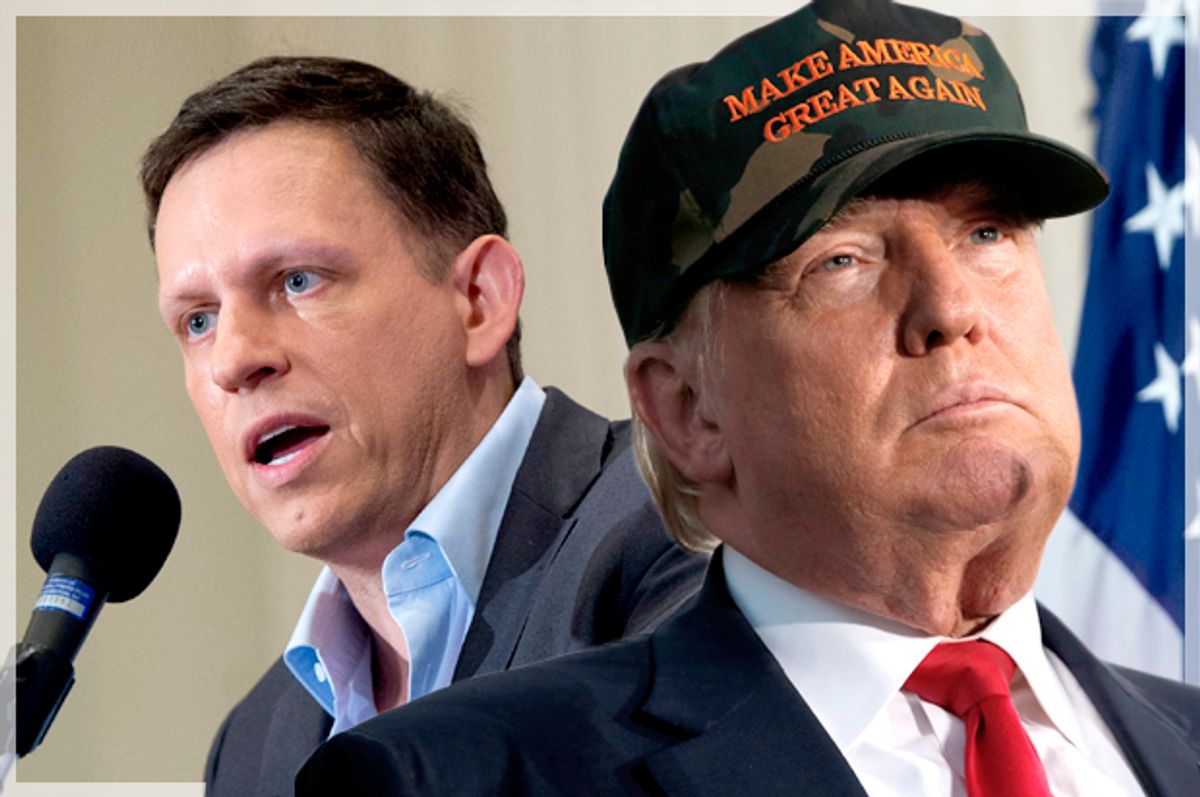 Peter Thiel, the billionaire tech entrepreneur in the Silicon Valley, speaks for Middle America when he says, "No matter how crazy this election seems, it is less crazy than the condition of our country.”

While giving a speech on Monday at the National Press Club in Washington, Thiel sought to defend his support for Donald Trump's candidacy by chronicling the pitfalls of America, saying, "We are voting for Trump because we judge the leadership of our country to have failed."

During his expansive speech about failed U.S. policy and the frustrations of the American people, Thiel spoke as if he were a representative of Trump's base: "I don't think that voters pull the lever in order to endorse a candidate's flaws. It's not a lack of judgment that leads Americans to vote for Trump."

To justify his support for Trump, Thiel denounced U.S. trade policies, which he said benefits well-connected people and gives them a reason to defend the status quo. "But not everyone benefits [from the status quo] and the Trump voters know it," Thiel claimed.

Thiel spent most of his speech condemning the Washington elite, who he believes has a habit of denying difficult realities. "That's how bubbles form," Thiel said.

"It all seems like a bad dream. Donors don't want to know how or why we got here," Thiel added. "They just want to move on. Come Nov. 9, they hope everyone else will go back to business at usual."

But Thiel argued that the United States cannot just move on without addressing the country's serious problems. "The heartland has been devastated," he asserted, adding that "millennials are the first generation to expect their own lives to be worst than their parents."

The doom and gloom in Thiel's speech channeled the mood of a Trump rally, even as the tech entrepreneur somehow seemed to be advocating a different vision of America. Yet throughout his entire speech, Thiel failed to name many concrete reasons to support Trump. Declaring that Trump gets the "big things" right, Thiel spent most of his time criticizing the current state of America, tying Democrats and presidential nominee Hillary Clinton to the "overpriced health care system" and past "bipartisan" wars in the Middle East.

Demonstrating he is the man of the American people, Thiel lamented the fact that a “single-digit millionaire” like pro wrestler Hulk Hogan cannot gain access to the U.S. legal system. In August Gawker was forced to shut down after Hogan's lawsuit, funded by Thiel, resulted in a $140 million verdict for the destitute, "single-digit millionaire" plaintiff.

Peter Thiel: "If you're a single-digit millionaire like Hulk Hogan, you have no effective access to our legal system. It costs too much." pic.twitter.com/Fo36ZiMR1B

This particular quote set off a scathing reaction on Twitter:

Can't wait for Peter Thiel to use his immense wealth to help out all those single digit hundredaires unfairly incarcerated. — Chris Kluwe (@ChrisWarcraft) Oct. 31, 2016

But Peter Thiel, who will look out for needs of the single-digit thousand-dollar-aires, sir? Who? — Rex Huppke (@RexHuppke) Oct. 31, 2016

Per the Peter Thiel rule, about 98.8% of U.S. households don't have adequate access to legal representationhttps://t.co/OPezFw0v8n — Steve G🎃ldstein (@MKTWgoldstein) Oct. 31, 2016

Watch a video of Thiel's speech below, courtesy of CNBC: