Dakota pipeline protesters say they were detained in dog kennels; 268 arrested in week of police crackdown 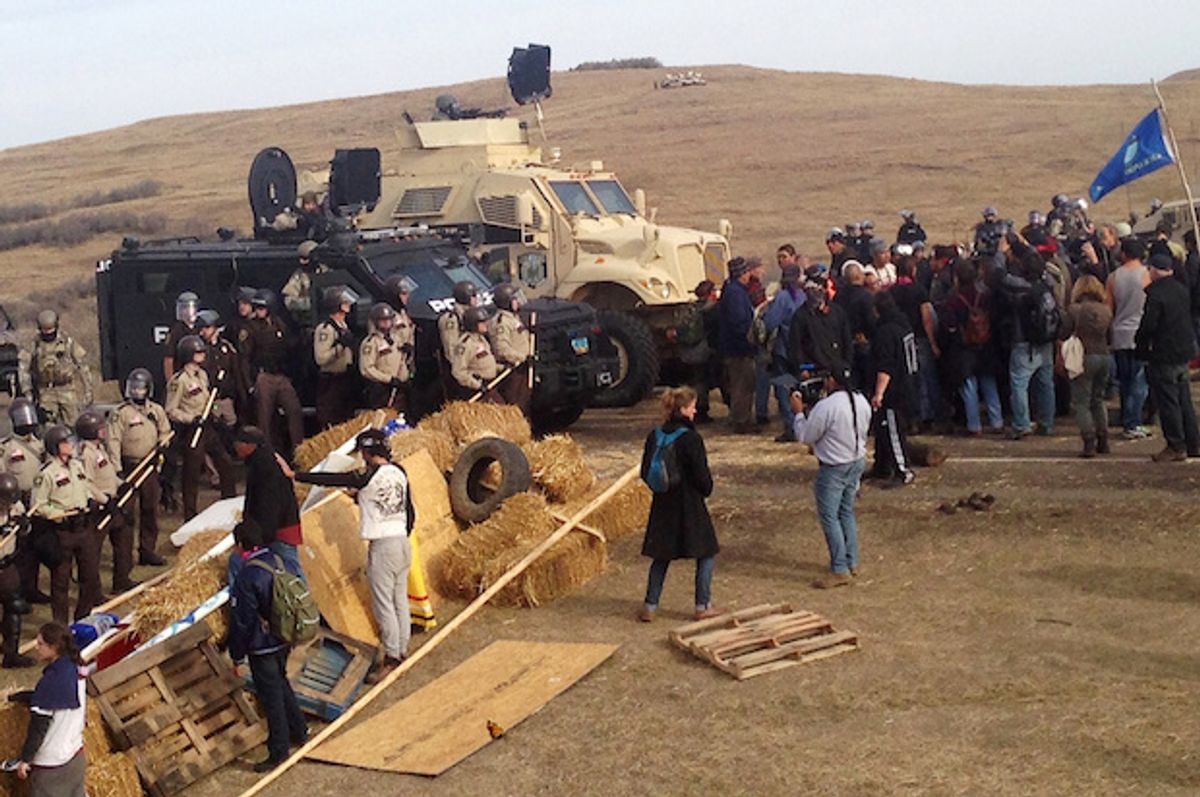 A line of police move towards a roadblock and encampment of Native American and environmental protesters near an oil pipeline construction site, near the town of Cannon Ball, North Dakota, U.S. October 27, 2016 (Reuters/Rob Wilson)
--

Tens of thousands of people have checked in on Facebook at the Standing Rock Indian Reservation over the past few days. They are expressing solidarity with the protests against the Dakota Access pipeline in North Dakota, which have faced an increasingly brutal backlash from police.

Native American activists on the ground recently told reporters they had been detained in dog kennels after being arrested at protests against the proposed pipeline. Other protesters have been pepper-sprayed by police and targeted with beanbag bullets as the militarized police crackdown has escalated.

For months, indigenous groups at Standing Rock have led protests against the $3.8 billion pipeline, which will transfer oil nearly 1,200 miles, from North Dakota south to Illinois.

Native Americans, who call themselves water protectors rather than protesters, warn that the pipeline will contaminate their lone source of drinking water and pollute their land. Thousands of environmental and social justice activists from around the country have joined their demonstrations in solidarity.

On Oct. 23, protesters reclaimed unceded territory that they said was “affirmed in the 1851 Treaty of Ft. Laramie as sovereign land under the control of the Oceti Sakowin,” the indigenous name for the Sioux. They created a camp on the land, which is in the proposed path of the pipeline.

At least 127 activists were arrested that weekend, in an aggressive police clampdown. Since then authorities have become even more violent, and the National Guard was called in on the peaceful activists.

On Thursday, hundreds of soldiers and police in riot gear raided the camp, aggressively dispersing activists with trucks, armored vehicles and buses, using pepper spray and a sound cannon.

An additional 141 activists were arrested, making the number of arrests for the week at least 268.

"Militarized law enforcement agencies moved in on water protectors with tanks and riot gear today," David Archambault II, the Standing Rock Sioux tribe's chairman, said in a statement after the raids. "We continue to pray for peace."

"As peoples of this earth, we all need water. This is about our water, our rights, and our dignity as human beings," he added.

Mekasi Camp-Horinek, a protest coordinator, told the Los Angeles Times that he and his mother had been detained in dog kennels. He said authorities also wrote numbers on their arms, adding, “It goes back to concentration-camp days.”

Native American activist Robby Romero also told the newspaper that a horse was shot in the leg with a rubber or beanbag bullet and that the animal subsequently had to be euthanized.

“It looked like a scene from the 1800s, with the cavalry coming up to the doors of the teepees, and flipping open the canvas doors with automatic weapons,” Camp-Horinek said of the police raid.

On Friday Sen. Bernie Sanders sent President Barack Obama a letter, calling on him "to take all appropriate measures to protect the safety of the Native American protesters and their supporters who have gathered peacefully to oppose the construction of the pipeline."

Sanders wrote, "It is deeply distressing to me that the federal government is putting the profits of the oil industry ahead of the treaty and sovereign rights of Native American communities."

The Dakota Access pipeline, if constructed, will transfer roughly 470,000 barrels of crude oil per day across several states. It is being built by the Fortune 500 company Energy Transfer Partners, which is based in Texas.

Amnesty International USA announced on Friday that it is sending a new delegation of human rights observers to North Dakota to monitor the authorities. The rights group had organized such a delegation in August and had previously sent letters to both the North Dakota Highway Patrol and the Morton County sheriff’s department expressing concern about the militarized response.

“We’re deeply concerned about what we heard during our previous visit to Standing Rock and what has been reported to us since,” Eric Ferrero, director of communications for Amnesty International USA, said in a statement on Friday. The organization emphasized that the right to protest must be respected.

Police have accused the protesters of violent conduct, including throwing rocks and even building Molotov cocktails. Activists have in turn accused the police of spreading lies about them.

“They are armed. We are unarmed. They are trying to spin the narrative," activist Robby Romero told the Los Angeles Times. "They are fast-tracking the pipeline."

On Monday, Sanders tweeted another message of support: "We must stand united with our Native American brothers and sisters and say: Stop the Dakota Access Pipeline. Respect Native American rights."

Democratic presidential nominee Hillary Clinton, on the other hand, has refused to openly support the protests. Her campaign released a brief statement on Thursday that tried to placate "all of the parties involved."