How Evan McMullin went from political unknown into a #NeverTrump symbol

Who is the man who could conceivably win Utah? 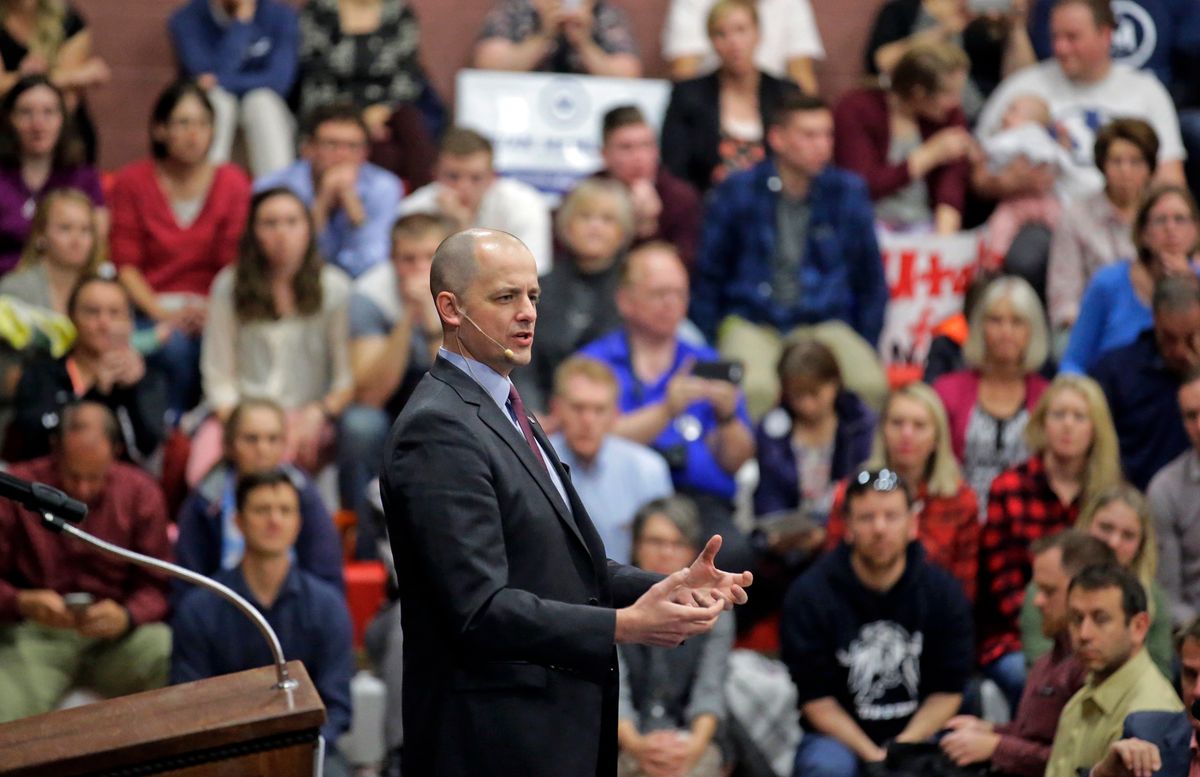 SALT LAKE CITY  — Former CIA agent Evan McMullin has quickly evolved from a political unknown to a legitimate threat to become the first independent candidate in nearly half a century to win electoral votes in a presidential election.

The presidency itself is out of his reach because McMullin is only on the ballot in 11 states. But he could poach enough conservative votes in Utah to squeeze past Republican Donald Trump and Democrat Hillary Clinton and become the first non-GOP candidate to win the mostly-Mormon state since 1964. That would be a particular blow to Trump.

McMullin, 40 and a Mormon, has been embraced by many Republican-leaning voters who are steeped in Utah's culture of courtesy and fed up with Trump's crudeness and antics.

So who is this guy?

McMullin recounts his life story at his rallies in Utah, Idaho, Wyoming and other Western states. In a school gymnasium in a Salt Lake City suburb, he told people he's a "simple person nobody knew of" who had a paltry 131 Twitter followers when he started his campaign. He now has 84,000-plus.

Born in Provo, the heartland of Mormon country, McMullin spent his childhood in a rural area of Washington outside Seattle. He did a two-year Mormon mission in Brazil, then returned to Utah to earn a degree in international law and diplomacy at the Mormon church-owned Brigham Young University.

He spent 11 years in the CIA doing counterterrorism work before leaving the agency to get a master's in business administration from the Wharton School of Business and have a brief stint in investment banking. He became a national security adviser for the U.S. House Foreign Affairs Committee.

He was chief policy director for U.S. House Republicans when he watched with amazement as Trump won the GOP nomination and no other conservative jumped in the race. By late summer, McMullin decided to try to give conservative voters an alternative to Trump and Clinton. Despite knowing he would endure ridicule and questions about his motives, McMullin went for it.

He criticizes the GOP establishment for not standing up to Trump early on and often takes indirect jabs at the candidate.

"A real conservative, when they see somebody else being attacked for their religion or because of their race, a real conservative will stand up and protect other people," McMullin said recently.

Trump's running mate, Mike Pence, tells people in Utah there are only two candidates on the ballot with "any chance" of being president.

That argument — that a vote for McMullin will help Clinton win — is heard often from those supporting Trump. U.S. Rep. Chris Stewart of Utah, who called Trump "our Mussolini" and denounced Trump's vulgar comments about women, said last week he'll vote for the GOP nominee because supporting a third-party candidate would boost Clinton.

McMullin counters that a vote for him would not only help him win Utah, but it also would kick-start a compassionate conservative movement, open to all races and religions, around the country.

"No matter what happens on Nov. 8, if we can send a strong message from Utah and the broader Mountain West, it will change the discussion in Washington and across this country," he said.

Cecil and Tiffany Sullivan, teachers from a Salt Lake City suburb of Murray, have become avid McMullin supporters, attending rallies with their infant son with their sign, "#Evan Help Us."

"We were kind of despairing about what we were going to do with our vote and then Evan came in," said Tiffany Sullivan.

Added Cecil Sullivan: "We like his polices better than anybody else; that he's for foreign trade, for ethnic diversity."

Damon Cann, a Utah State University political scientist, said McMullin has seized the opportunity created by the unpopularity of Trump and Clinton by convincing some voters that he's a better option than Libertarian candidate Gary Johnson, whose policies don't quite jibe with Utah's socially conservative culture.

McMullin's choice of a woman as his running mate, Republican strategist Mindy Finn, is just one part of his campaign that has endeared him to Utah voters, especially young Mormons, Cann said.

"People tend to have a higher level of social trust for people who are in the same group," Cann said. Mormons "find Evan McMullin to be trustworthy on the account he shares their religious identification."

Matthew Burbank, an associate professor of political science at the University of Utah, said McMullin's strategy to stake out general, conservative ideas, without a detail, seems to be working for him.

"He's primarily a symbolic conservative," Burbank said. "As long as he holds that position, some Utah voters will look at that and say, 'I'd rather vote for him.'"

Elections 2016 Evan Mcmullin From The Wires