Consumers and companies alike are distracted and cautious ahead of Nov. 8 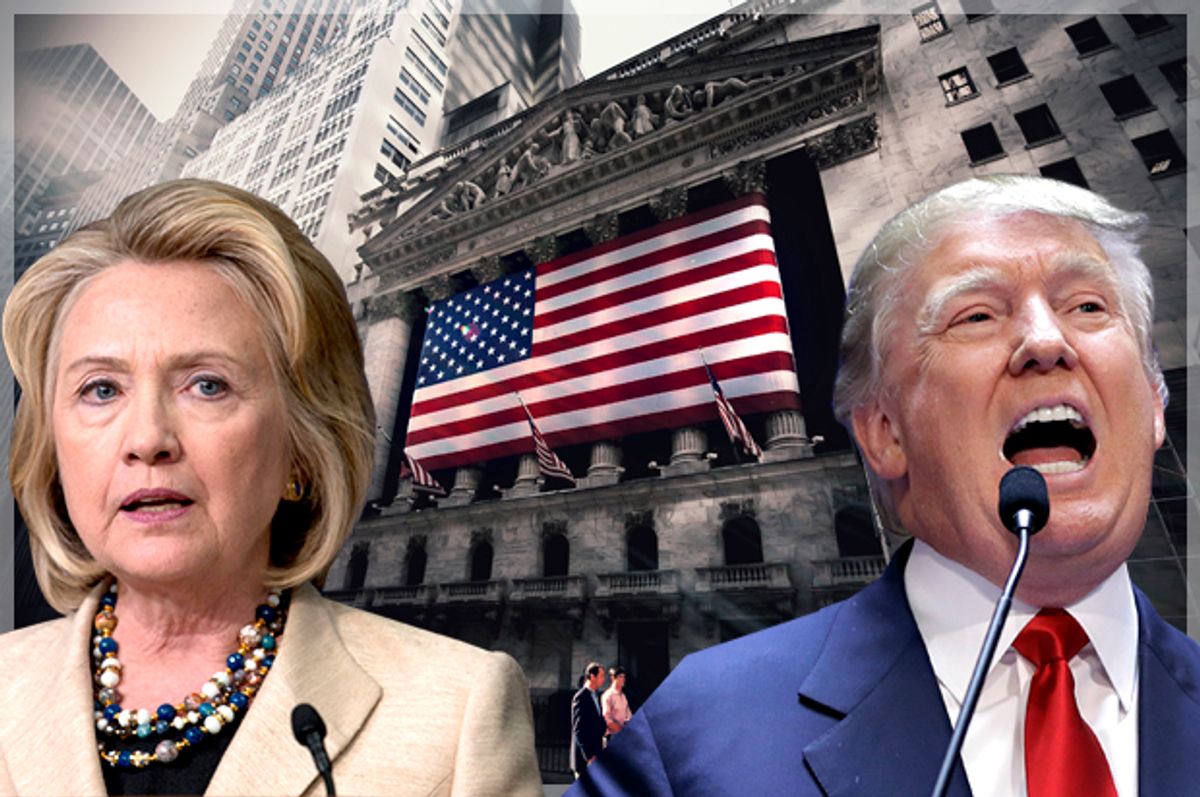 Does the U.S. presidential election affect your decision about when to buy a new washing machine or buy a new piece of equipment for your business? The CEOs of some of America's largest companies think so.

Perhaps, or maybe their own worries about the election inform their view of things. On Friday they had another reason to think Americans are worried about the course of the country over the next four years. Though Democratic candidate Hillary Clinton is ahead in the polls, news on Friday the FBI was investigating new emails linked to Clinton’s personal server controversy pushed down U.S. stocks and the value of the Mexican peso as investors perceived Donald Trump's chances of winning on Nov. 8 had risen.

About a third of America’s S&P 500 companies have reported their third quarter earnings and so far the results have been largely, well, better than expected. But for those companies that didn’t meet forecasts, or have downgraded their earnings expectations for the year, there has emerged a common refrain: U.S. consumers and businesses have been pulling back on spending as they wait to see whether Hillary Clinton or Donald Trump wins the keys to the Oval Office.

“It does seem like the consumer is freaked out a little bit around the election,” Robert Wetenhall, an analyst at RBC Capital Markets LLC, said during an Oct. 25 conference call with top executives at Whirlpool.

“We certainly saw a slowdown in the third quarter,” John G. Morikis, chairman and CEO of the Sherwin-Williams Co., the Ohio-based paint manufacturer, said in a conference call with investors on Tuesday, citing a summertime slowdown in the housing market that’s “contrary to what most of the [official] data would suggest.”

Executives often like to blame non-financial factors for poor or lower-than-expected performance, such as unseasonably cold or warm weather and geopolitical impacts. So perhaps it's not surprising that the election has become  a popular target. Here’s what some top executives have been saying about the impact of the presidential race on their companies' performance:

Americans are distracted by the election . . .

Earl Hesterberg, CEO of Houston-based Group 1 Automotive, the nation’s third-largest car dealership, discussed the state of auto sales in America, as new-car sales are expected to drop by as much as 7 percent in October. Hesterberg said: “I think there's some factors that will gain some clarity after we get a presidential election outcome, and then we’ll see what the mood of the public is, because so much of consumer confidence [is] psychological and most experts would contend that the current electoral process is creating some distraction.”

After election day, they will eat out more often . . .

Greg Trojan, president and CEO of California-based BJ’s Restaurants, which reported a 23 percent drop in earnings and lower customer traffic: “I am hopeful post-election people will get into a more normal rhythm and mindset.” Conventional wisdom suggests that the U.S. sit-down restaurant industry is facing broader problems that have nothing to do with the election, including an overabundance of choices and changing consumer habits.

Mark Barnello, CEO of LaSalle Hotel Properties, which owns 46 upscale hotels in nine states and the District of Columbia:  “I would think [November and December] would be better than October. We are worried about the election impact . . .  not just in DC, but potentially elsewhere. When we look at our pace for the quarter, it has mixed messages.” LaSalle missed profit and revenue forecasts for the third quarter. U.S. hotel occupancy has been flat this year, but October data actually suggests an increase.

But the outlook for import/export traffic depends on who wins . . .

Hunter Harrison, CEO of Calgary-based Canadian Pacific Railway, said revenue for the rail cargo carrier dropped as Canada’s grain harvest was lower than expected: “One of the things that I give a lot of thought to is what is going to happen in November for the election. And that could have big, big impacts both plus and minus and we are just going to have to see how that shakes out . . . I'm not picking a candidate, I am not telling you what the outcome is going to be, I am not that smart, but there is more to come on that.” A victory by Republican candidate Donald Trump would, if he fulfills his campaign promise, adversely impact global trade, which would disrupt the flow of goods carried by Canadian Pacific, which has routes into the U.S. as far south as Missouri.

While businesses are holding back on heavy equipment purchases . . .

Michael Lynn DeWalt, vice president of the Financial Services Division of Illinois-based machinery and engine maker Caterpillar, Inc., which reported lower-than-expected sales and lowered its 2016 forecast: “Hopefully, sentiment will improve. We'll get the election out of the way. We'll have a new government that's interested in infrastructure spending. And somewhere six months to a year down the road, maybe that'll turn into something better but right now, I think we're on the fence and concerned about overall construction in North America.” Caterpillar is one of the most widely watched companies, viewed as a proxy for the health of the global construction industry. Both Clinton and Trump have made big promises to kick-start investment in the U.S. infrastructure, though no major initiatives would come anytime soon.

And food franchise operators are even more cautious . . .

Nigel Travis, chairman and CEO of Dunkin’ Brands, the Massachusetts-based owner of Dunkin’ Donuts and Baskin-Robbins, which reported lower-than-expected sales and store opening in the third quarter: “I think what is driving franchisees towards the lower end [of estimated store openings this year] is several factors . . . uncertainty over the general election; Senate, obviously the House and local elections . . . So it is uncertainty overall that I would say is the concern. And I think until we get past the election, that's going to be a little bit of a drag . . . I think we will all be pleased when that’s past.”

But yes, it's true: Election jitters are slowing demand for washing machines . . .

Whirlpool stock plunged in its worst single-day drop in five years after the 109-year-old Michigan-based home appliance maker reported lower sales and profit for the three months ending Sept. 30 compared to the same period last year, as demand for their big-ticket household items retreated. Jeff M. Fettig, Whirlpool chairman and CEO, said: “We have seen what we believe is a temporary softness in industry demand in the U.S.; particularly you saw it early in the quarter in July and August with some rebound in September. We believe this is due to consumer confidence weakening, primarily due to the focus around the U.S. elections.”