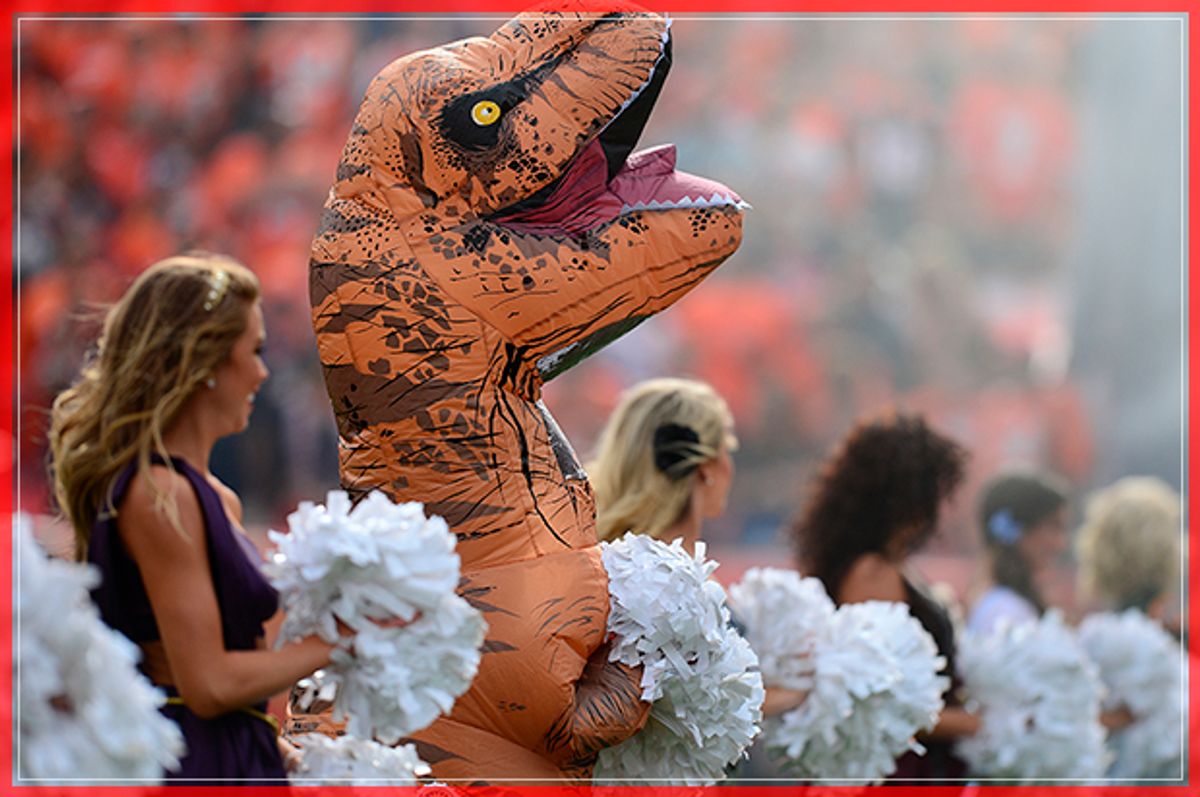 DENVER, CO - OCTOBER 30: A Denver Broncos cheerleader in a dinosaur costume before the game against the San Diego Chargers at Sports Authority Field at Mile High on October 30, 2016 in Denver, Colorado. (Photo by Dustin Bradford/Getty Images) (Getty Images)
-- You know that feeling when you show up to work during Halloween season dressed in a costume but everyone else is just wearing their normal work clothes? And your coworkers spend all day giving you the stink-eye because you can’t reach the water fountain with your tiny T. Rex arms, to say nothing of how much help you need going to the restroom in that thing? And then you can't do the pom routine because again, tiny arms? And someone asked for an autograph but you just roared and stomped away? Also maybe you made a toddler near the sidelines cry? Is this the best game ever, or just the best Halloween weekend game ever? Go Broncos!

Asnieres, France   Charles Platiau/Reuters
A dog passes by the gravestone of "Harley" in the cimetiere des chiens (Cemetery of Dogs) in northern Paris My parents have owned three consecutive dogs since before I was born. I very recently learned that dogs can't eat grapes. That's three dogs I somehow managed to avoid inadvertently poisoning. Those of us who regard our fingernails as nature's Swiss Army Knives can only vicariously enjoy the majesty of a manicure masterpiece. At this year's Tokyo Nail Expo, roughly 50,000 fans and nail artists are coming together to flaunt their digits. We whose talons look more like car wrecks than miniature art canvases can only put our shabbily groomed hands together and applaud When it comes to hard-luck loserdom in professional sports, the Cubs are the undisputed kings: the last time the team won a championship, the sun still rose on the Russian, Ottoman, and Austro-Hungarian Empires. You empathize with their fans and want the team to win simply for the catharsis that will ensue after more than a century of failure. At the same time, however, one must consider the likely aftermath of victory: the rise of the insufferable Cubs fan. It happened in Boston after decades of cursed Red Sox teams: the taste of victory turned lovable loser Sox fans into entitled assholes. There is nothing more poisonous for a team's fans than victory, and should the Cubs pull it out, their once sympathetic backers will quickly become the worst people on the planet.