So much for the "upstanding" James Comey: The FBI director's long career as preening partisan hack 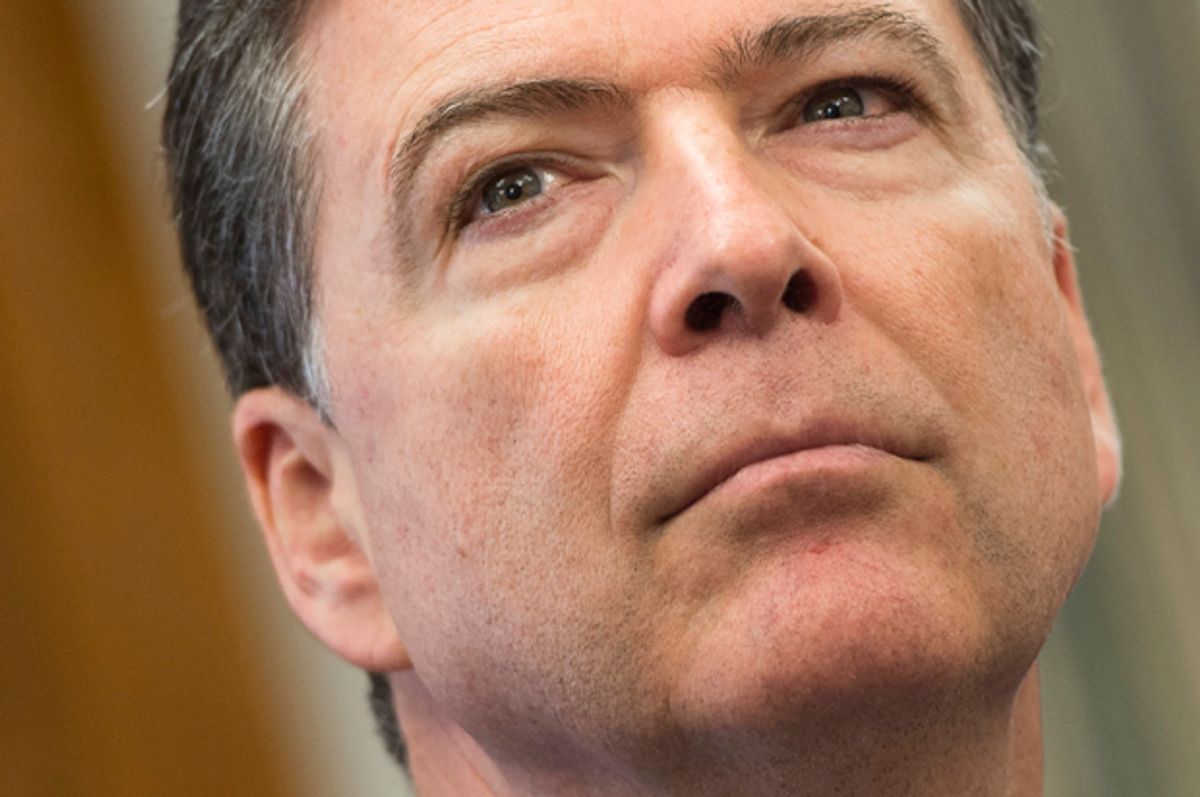 Unless you spent the weekend fishing on the Yukon River with your phone turned off, you have heard about Comeygate, the latest nuclear bomb to drop into this already explosive presidential race.

The details have been well explained by The New York Times, but with new information being leaked by the FBI minute by minute — and with no way of knowing if any of it is true — all that could change. At the time of this writing, the cable news outlets and the front pages of all the papers are obsessed with the story, both its substance and the political fallout.

Democrats are stunned that a FBI director would inject himself into a presidential election with just 11 days left, and Republicans are giddy with excitement that their nonstop condemnation of the FBI director, James Comey, for failing to prosecute former secretary of state Hillary Clinton seems to have paid off.

Most legal professionals are appalled. Jamie Gorelick and Larry Thompson, former Justice Department officials under ex-presidents Bill Clinton and George W. Bush, put it this way in their scathing op-ed in The Washington Post yesterday:

Having taken the extraordinary steps of briefing the public, testifying before Congress about a decision not to prosecute and sharing investigative material, Comey now finds himself wanting to update the public and Congress on each new development in the investigation, even before he and others have had a chance to assess its significance. He may well have been criticized after the fact had he not advised Congress of the investigative steps that he was taking. But it was his job — consistent with the best traditions of the Department of Justice — to make the right decision and take that criticism if it came.

Yes, if Rep. Jason Chaffetz and his witch-hunt committee had found out after the election that the FBI had found some emails on Clinton aide Huma Abedin's laptop, they would have screamed bloody murder that the FBI had covered it up. So what?

The larger issue is that the rules and norms of the Justice Department have held for a very long time, and for very good reason: In the 30 to 60 days prior to an election the agency's officials should make no public announcements that could influence the vote. That's all Comey would have had to say by way of explanation. And if Chaffetz and Rep. Trey Gowdy yell at him for doing this, well, he's the FBI director. If he can't take the heat and defend his own institution and democratic norms, maybe he's not the right man for the job.

But then this isn't the first time for Comey to break with DOJ guidelines in the case. His press conference in July announcing that no charges would be brought, while excoriating Clinton for her handling of classified emails, was completely out of bounds. If the government doesn't have the goods, it certainly doesn't have the right to smear the subject of its investigation, which is essentially what Comey did with his statement and repeated inappropriate testimony before a partisan congressional committee.

And now there's this.

Some of us are anything but surprised. Liberals who lived through the '90s and the endless Whitewater probe that went nowhere met President Barack Obama's appointment of James Comey as director of the FBI with a primal scream of "Are you kidding me?" It was inconceivable that, just as former president Bill Clinton had foolishly appointed a Republican FBI director, Louis Freeh, who saw it as his primary duty to investigate a president he did not respect, a Democratic president was appointing a GOP lawyer to the same job 20 years later in an even more toxic political environment.

At the time, everyone in Washington seemed to be very pleased with the choice, seeing Comey as a "straight shooter" without a political agenda. That was largely based on his dramatic congressional testimony about the night in 2004 that he and then-FBI director Robert Mueller raced to former attorney general John Ashcroft's sick bed to stop the White House counsel Alberto Gonzales from coercing the ailing AG into signing an illegal domestic spying order.

A lot of civil libertarians understood that to signify that the heroic Comey had been arguing the constitutional point, but he wasn't. His concerns had been over a technical problem with the program's legal basis. They fixed a few little details and Comey signed the order that month to keep the secret domestic surveillance program going for many years. A civil liberties hero he is not.

Comey is also the U.S. attorney who oversaw the prosecution and torture of José Padilla, an American citizen convicted of terrorism whose horrific treatment was described by a forensic scientist at his pretrial hearing as “essentially the destruction of a human being’s mind.” Again Comey took to the microphones to gallantly inform the public that his purpose was to “allow the American people to understand the threat he posed, and also understand that the president’s decision [to prosecute Padilla as an 'enemy combatant'] was and continues to be essential to the protection of the American people." If there's a camera for Comey to preen before to proclaim his righteous purpose, he'll find it.

It's not as if the Democrats were unaware that Comey's reputation for being nonpartisan was bunk before the White House inexplicably tapped him for FBI director. He first came to public attention as the deputy special counsel for the Senate committee investigating Whitewater. In a foreshadowing of his testimony last summer, he and his committee were unable to find any criminal wrongdoing by Bill and Hillary Clinton in the Whitewater matter but nonetheless decided to issue a public report filled with aspersions and innuendo accusing the Clintons of hiding secrets and engaging in misconduct. That's par for the GOP course with its congressional witch hunts, but beyond the pale for an FBI director.

Nonetheless, Obama appointed him and the political establishment rejoiced. But it wasn't long until he showed that he wasn't going to adhere to the normal rules. Indeed, Comey is the first FBI director since J. Edgar Hoover to flout institutional processes, ignore scientific data and independently wield his authority however he chooses. Since taking office on 2013 he's battled with the executive branch on sentencing reform and how to handle the Black Lives Matter movement. He's defied the White House in its attempt to create new policy on cybersecurity issues. He's gone around the country ginning up hysteria about ISIS infiltration in small-town America. And then there's the Clinton email investigation.

Comey doesn't resemble Hoover in temperament or background. But law enforcement and justice officials have for years worried that his independent, authoritarian style was dangerous, making him politically unassailable in the same way that Hoover was back in the bad old days. Legal luminaries like longtime Department of Justice official Philip Heymann, ex-attorney general Eric Holder and numerous other former federal prosecutors and law enforcement officials have objected to his latest action.

Unfortunately the damage is already done. It's a mess that can be only cleaned up with Comey's resignation.