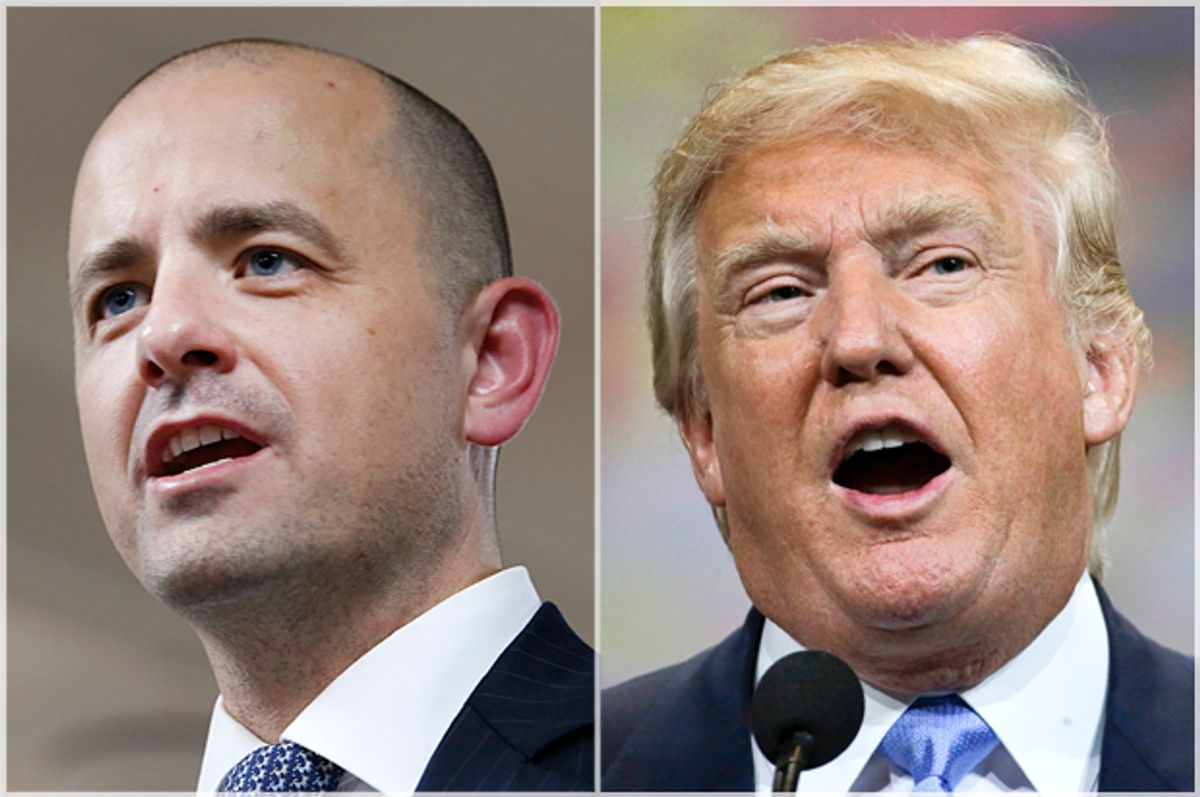 Not many people are paying attention to the independent presidential run of Evan McMullin. According to Google Trends, as a search term McMullin ranks a little higher than Green Party candidate Jill Stein and well behind Libertarian Party candidate Gary Johnson.

That said, among his fellow Mormons, there appears to be a lot of interest in the presidential candidacy of the former Republican congressional staffer. In a Utah survey released this past the weekend by The Salt Lake Tribune, McMullin trailed Republican nominee Donald Trump by just 2 percent, within the poll’s margin of error.

Losing Utah would be an unthinkable humiliation for the GOP, which has carried the state in every presidential election since 1964. Not coincidentally, that was the last year that the party ran a candidate who was widely condemned for extreme views, Barry Goldwater.

McMullin has also polled in the low double digits in neighboring Idaho, ahead of Johnson’s 4 percent. It’s even possible that his support could be higher than the surveys are indicating, since many pollsters don’t include him in their questionnaires.

All this means that everything is going to plan for the diehard Trump opponents who are bankrolling and staffing this long-shot presidential campaign. They realized even before McMullin declared his candidacy that only a Mormon could stand a chance in the sparsely populated Western states that didn’t take to Trump and his Democratic rival Hillary Clinton during the party primaries.

As I predicted in August, the most ardent Trump supporters haven’t taken McMullin’s success kindly, and the rising anger against him among Republican loyalists has taken on religious overtones.

On Sunday, former Business Insider's chief technology officer, Pax Dickinson, launched a series of tweets suggesting that if McMullin were perceived as somehow throwing the election to Clinton, this would lead outraged Republicans to seriously consider murdering Mormons by the millions. “Mormons will be blamed for it. Chance of a future Mormocaust spikes sharply,” he wrote.

Last Wednesday Fox Business Network host Lou Dobbs also took to Twitter to denounce McMullin — a genial former CIA officer with a shaved pate and neoconservative views — as a proxy for 2012 GOP presidential nominee Mitt Romney and others of his faith. McMullin, according to Dobbs, is “nothing but a Globalist, Romney and Mormon Mafia Tool.”

Asked about Dobbs’ comment, McMullin told CNN that the populist anchorman should invite him on his program. “I’d love to hear him describe exactly what is the Mormon mafia. I think it would be pretty interesting to hear.”

While Dickinson and Dobbs appear to be some of the Trump supporters who are the most angry at Mormons, it’s apparent that the Trump candidacy has divided conservatives along religious lines as much as it has by class and region. That was true even before McMullin entered the picture.

While Trump has consistently earned high marks from white evangelicals, he has failed to reach levels of support among Mormons, Jews and Catholics that were commonplace for past Republican nominees. Many of the most vocal leaders of the “NeverTrump” movement are also Mormon or Jewish, including radio host and doomsday prophet Glenn Beck and magazine publisher Bill Kristol.

Four of the five counties where Trump earned his lowest vote totals were in heavily Mormon areas. The former reality TV star has struggled among Catholic voters as well, with Clinton leading Trump among white Catholics by 46 percent to 42 percent in a poll released earlier this month by PRRI, a nonprofit research organization specializing in studying religious attitudes. In the 2012 election, Mitt Romney earned a 59 percent share among white Catholics.

“If you look at Trump’s rhetoric, that makes a lot of sense,” Cox said in an interview. “He’s hearkening back to making America great — again. When you look at the past, the religious group with the most power back in the day was white Protestants.”

The real estate billionaire’s appeals to returning to former greatness resonates strongly with white evangelicals, Cox said, pointing to a PRRI survey that showed that demographic group as overwhelmingly agreeing with the idea that America has worsened since the 1950s.

By contrast, people of religious faiths that have been more culturally marginal or that have historically faced discrimination would not be interested in returning to former societal attitudes, Cox said. That’s particularly the case with Mormons, who were subjected to violence based on their religious views and political stances in the past.

“That history of being persecuted is really powerful among Mormons,” Cox said. “So when Trump singles out Muslims, I think that hearkens back to Mormons, to their own experience.”

The GOP nominee’s repeated feuding with Romney and his recent gaffe stating that McMullin was conducting his campaign in coffee shops — when observant Mormons don’t drink the beverage — certainly hasn’t helped his image among the group either.

On the other side of the coin, Trump-supporting evangelicals seem to be feeling cheated that the candidate they supported (he swept the Southeast except for Texas) isn't getting the party-establishment support that nominees typically receive.

Conservative Trump backers have also pointed out that they supported party-establishment candidates like Romney so they expect the favor to be returned.

A poster at the conservative forum Free Republic going by the name Bird Jenkins likely spoke for many grassroots Trump backers: "It’s ironic that Mitt Romney is trying to save the GOP," he wrote. "I didn’t want him at the time but held my nose. Trump is right, Mitt embarrassed us. Now there is a Republican candidate generating real enthusiasm and doofus Mitt wants to bring it to a grinding halt."

It's also true that Trump himself supported Romney in 2012 as did an overwhelming number of white evangelicals. Many of the billionaire's right-wing backers see Mormons as being manipulated by GOP elites.

"They needed a voting block of patsies and picked Mormons because they can easily sold a bill of goods about voting their conscience instead of reality," according to Free Republic member azcap.