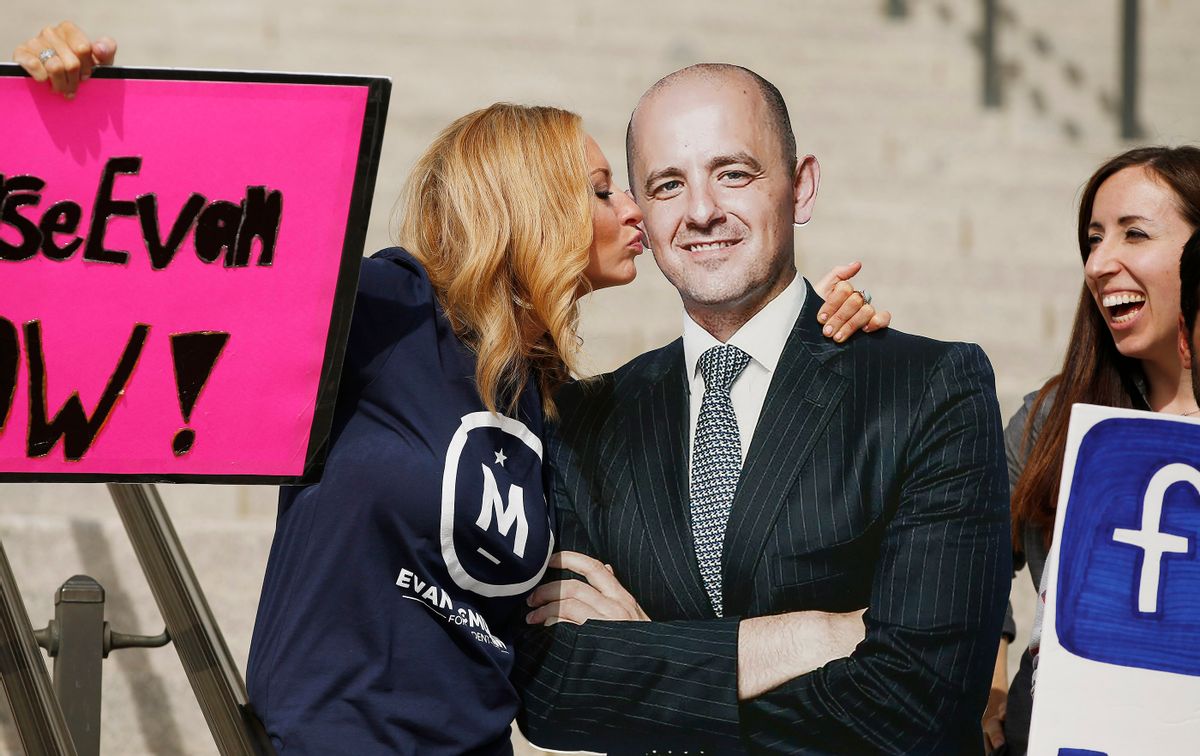 Trying to stave off the very real possibility that independent presidential candidate Evan McMullin could actually win Utah's six electoral votes instead of Donald Trump, a white nationalist supporter of the GOP nominee is targeting 190,000 Utah voters with a robocall attacking McMullin and claiming that he is secretly gay.

“Evan is over 40 years old and is not married and doesn’t even have a girlfriend," the caller says. "I believe Evan is a closet homosexual."

In the recorded message, longtime white nationalist William Johnson tells listeners that McMullen is “an open borders, amnesty supporter” who might be homosexual because his mother divorced his father and is now married to another woman.

“Evan has two mommies," Johnson says in the message. "His mother is a lesbian, married to another woman. Evan is OK with that. Indeed, Evan supports the Supreme Court ruling legalizing gay marriage.”

McMullin, who is an active member of the Church of Jesus Christ of Latter-day Saints, has said he accepts his mother’s marriage but still opposes legal recognition of same-sex unions.

“As far as my mother's marriage is concerned, I believe in the sanctity of traditional marriage. It is an important part of my faith,” McMullin told The Salt Lake Tribune. “My mother has a different view. That is OK. I love her very much, and she is one of my best friends. She is a wonderful mother. I wish everyone could have a mother like my mom.”

McMullin’s Mormon religion plays an important role in his protest candidacy. It's integral to his appeal in Utah, which has by far the country's largest concentration of members of that faith.

That Johnson would target McMullin in Utah is also notable since the white nationalist attorney formerly resided in the state while attending Brigham Young University, which is also McMullin’s alma mater. In an interview, Johnson would not discuss whether he was a member of the Mormon church as well.

“I don’t talk about my religion,” Johnson said, adding that he did not address McMullin’s faith in his robocall. He said that several members of his family currently live in Utah but they generally do not vote in elections. More than 90 percent of Brigham Young's student body are Mormons.

Johnson said he has received mixed feedback from his calls, which instruct listeners to ring him back on his personal cellphone. There’s a possibility that they may be more effective than some of the others he has done in the past because the LDS church officially opposes same-sex marriage and has a formal policy that any Mormon entering into such a union may be expelled from its membership rolls. That treatment also extends to minor children of LGBT couples, prohibiting them from joining the church if they live primarily with a parent who is in a marriage with a person of the same sex.

That policy may not be an important indicator of Utah politics in 2016, however, because the state has long had a liberal streak despite its conservative reputation. The current mayor of Salt Lake City, Jackie Biskupski, is a married lesbian. The Salt Lake region has also been represented by Democratic members in the U.S. House of Representatives.

According to Johnson, Utahns who approve of Biskupski as mayor of the state’s largest city would likely vote for Democratic nominee Hillary Clinton, whereas those who don’t like that fact would likely consider a vote for Trump or McMullin.

Johnson, who is also the chairman of the American Freedom Party, said he wasn’t concerned that identifying himself as a white nationalist would detract from his message. In fact, he believes it makes people he calls more likely to pass on his recording if it reaches their voicemail.

“As a general rule, I find that there’s a much higher percentage of people who share messages from a white nationalist," he said. "If I were to call people and ask them to join Amway, it’s not going to get transferred at all.”

The attorney also said that his racist message of support for Trump wouldn't be a liability for the GOP nominee due to a “dramatic shift in public opinion,” which he said had occurred “in the last few months toward nationalism.”

“That is a phenomenon that is recent. In a matter of six months or so, we’ve begun to turn the corner,” Johnson said, referring to the comments sections on general-interest news websites. According to Johnson, people now leaving remarks on webpages about Black Lives Matter and other nonwhite racial activists are much more likely to be critical of those movements than previously.

Trump and his staff have disavowed any explicit connection with white nationalism, but many such groups continue to support him openly.

Responding to the calls on Twitter, McMullin urged Utah Republicans to back away from Trump and denounced the accusation that he is gay.

Will Utah GOP leaders continue to stand with @realDonaldTrump and white nationalists' as they attack my faith and spread baseless lies?

Johnson has been supporting Trump throughout his candidacy and even managed to get selected as a supporting delegate to California's Republican convention before word of it leaked out and he was forced to resign his position.