It's not the economy — it's the jobs, stupid: What the last employment report before the election will tell us

The October jobs report may not decide the who wins the presidency, but it will set the agenda for whoever does 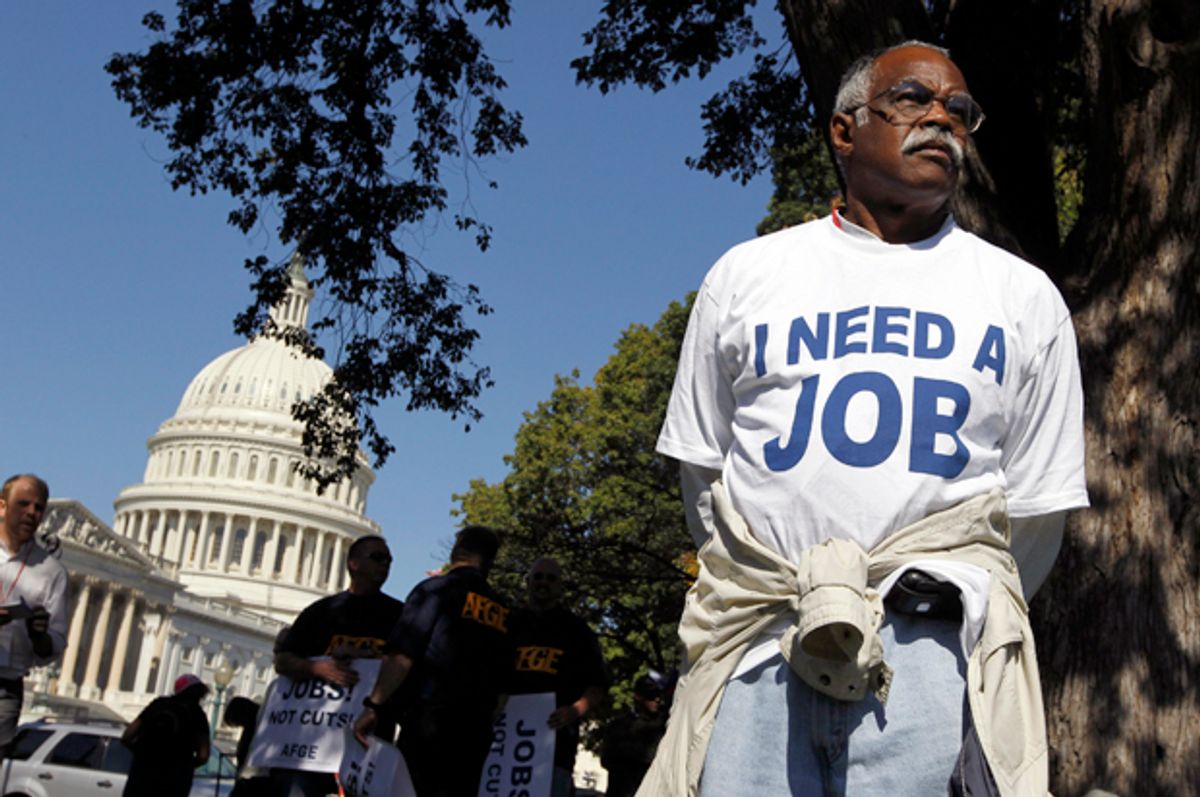 On Friday Americans will get a glimpse at the last monthly U.S. jobs report before they head off to the polls next Tuesday to decide who will lead the nation for the next four years. By just about every imaginable measure of the labor market, Americans are better off than they were when President Barack Obama came into office in 2009, inheriting the worst economic crisis since the Depression.

Look at any category, and the unemployment rate is lower. The official number has been cut in half since it peaked at 10 percent in October 2009. Underemployed people who want more hours are getting them. Whatever specific group you can bring up, youths, people with disabilities, war veterans — they’re all more likely to be working now than in the wake of the economic crisis that sent more than 8 million people onto the unemployment rolls in 2008 and 2009.

By the time members of the first family leave the keys to the White House to Hillary Clinton or Donald Trump, President Obama will have created more than 11 million jobs during his two terms in office, including 1.6 million this year through September. Wall Street analysts expect the Department of Labor on Friday to announce that 165,000 jobs were added to the economy last month and that the official jobless rate dropped from 5.0 percent to 4.9 percent.

There’s plenty to cheer about in those numbers, but problems persist in the labor market that will need to be addressed by the next president. Job creation has been slowing this year, to 178,000 on average each month compared with 229,000 during last year. Wages growth is still anemic, barely keeping up with inflation. And a disturbingly high number of Americans have been out of the job market for so long that they’re not even counted as unemployed; they're clumped together with jobless teens, college students who can’t work and older early retirees.

“The fact is we have weakened unions and workers have less leverage,” Elise Gould, senior economist at the Economic Policy Institute, a nonprofit group that analyses the economic impact of policy policies on lower-income Americans, told Salon. “Labor’s share of private-sector income looks like it’s coming back a little bit, but it’s still far below where it could be at this point in the recovery.”

Gould pointed mainly to the opportunities squandered by Congress to implement more stimulus spending measures, such as investing in public school teachers (there are fewer now than before the Great Recession) and much-needed public works projects. The opportunities were squandered even as record low-interest rates would have made such jobs projects cheaper.

Those and other failings mean that the U.S. labor market still has a long way to go. Americans should ignore headlines touting that the U.S. is back to “full employment.” It’s a term touted each time the official jobless rate falls below 5.0 percent. But the real jobless rate is higher than the official one if you include the dejected and uncounted. As we enter the final months of the Obama administration, it’s worth reviewing some of the lingering issues that either a President Clinton or President Trump will have to tackle.

There are still a lot of “missing workers”

One of the most vexing challenges with the current U.S. labor market is that millions of Americans have thrown in the towel and stopped looking for work. In September 2015 the labor force-participation rate for Americans aged 25 to 54 hit its lowest level since February 1984, at 80.1 percent, meaning that roughly 1 in 5 prime-working-age adults gave up looking for jobs.

There have been numerous attempts to explain the phenomenon, including poor health and computer-game addiction, but the main reason is that the postrecession economy has been sluggish in absorbing would-be workers. Discouraged by the challenging prospects of finding work, these Americans have found ways to survive without jobs, such as relying on friends and family or collecting long-term benefits like disability.

There could be other explanations, too, like a rise in the number of Americans working in the so-called informal economy, which includes any undeclared labor activity in which money changes hands. With those missing workers factored in, the unemployment rate would be at least a full percentage point higher. Hourly wage growth remains lower than it should be

One of the lingering specters of the Great Recession that Obama inherited when he took office in January 2009 is that a lot of workers have spent longer periods of time between raises, while the average of hourly earnings has either missed or barely kept up with inflation through much of the postrecession recovery years.

From 2010 to 2014, the average hourly private sector wage grew only 1.9 percent, to $20.73 an hour, according to Department of Labor’s Bureau of Labor Statistics. Last year that figure rose 2.6 percent, to $21.26 an hour. Adjusted for inflation, the 12-month average private-sector hourly wages for production and nonsupervisory (most workers fit in that category) climbed 2.5 percent last year, its highest jump since 2009, when inflation plunged and gave workers an indirect raise because their wages had more spending power.

Low inflation can be good, but if prices drop because people are losing their jobs, this can lead to a crippling deflationary spiral. Now inflation is ticking up slowly, as are the number of jobs, and wages are starting to follow as employees are forced to give raises to employees to retain them.

While Republican presidential nominee Donald Trump’s recent claim that 59 percent of black youth are jobless was laughably misleading, he was exploiting the fact black youths are at least twice as likely as their white counterparts to be out of work. The unemployment rate for African-American teens age 16 to 19 is about 28 percent, down 2010's 43 percent — the highest annual jobless rate for black youths since the government began tracking that data in 1972.

For white teens, the jobless rate dropped to about 15 percent, down from about 23 percent, the highest annual jobless level since such records began to be tracked in 1954.

Hispanic youths, too, experienced a similar pattern: Last year their rate declined to an eight-year low after hitting a record high in 2010 of about 32 percent. (The Department of Labor doesn’t track historical data for Asian teens, but in the third quarter the unemployment rate was about 12 percent.)

African-American teens have more job opportunity now than they had in the early years of the Obama administration, but their participation rate remains stubbornly low: Only 28 percent of black teens in this age group are either employed or looking for work, compared with about 36 percent for white teens. Minority youth unemployment is a persistent problem; the postrecession recovery has only put the problem back where it was before.

But, hey, at least more workers feel like they can quit their jobs

One data point that's often overlooked comes from a monthly survey of private-sector job openings and separations, meaning the rate at which people quit their jobs.

A healthier economy has more labor-force turnover as people move from one job to another, often because they’re pursuing better pay and benefits. In July 2009, a month after the official end of the Great Recession, the percentage of workers who quit their jobs bottomed out at 1.7 percent.

That rate has topped 4 percent for six of the first eight months of 2016, and in April it hit its highest level since January 2001, at 4.2 percent. This so-called quits rate should stay at about 3.5 percent to 4 percent to show workers are less fearful of losing their jobs.

This, coupled with recent wage-growth data, is a strong indicator that employers are increasing facing pressure to keep workers. All of which could bode well for workers in the coming year — assuming the jobs market can continue to create about 150,000 to 200,000 jobs a month and we don’t hit another recession anytime soon. Fingers crossed.