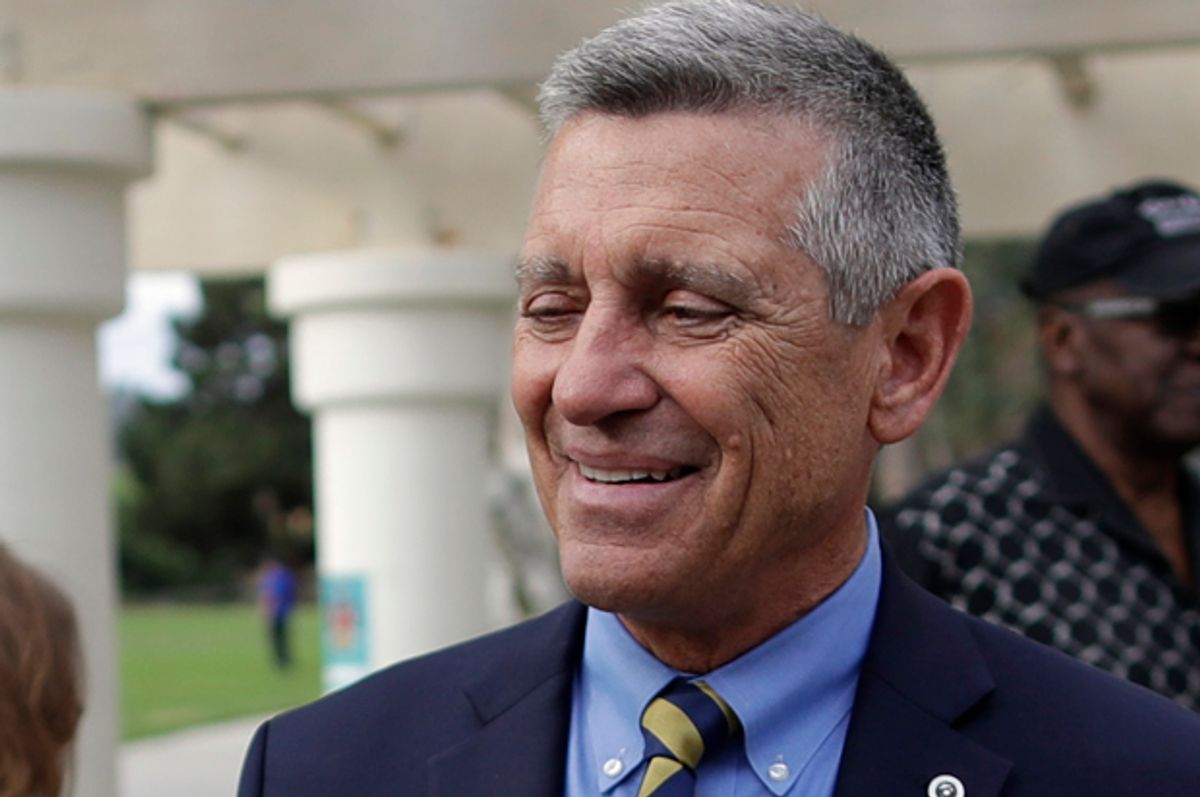 In 2000, Darrell Issa was first elected to Congress by more than 30 percentage points. When his district was redrawn in 2012, Issa won by "only" 16 points. But this year for the first time, the Republican who represents California’s 49th Congressional District faces a real challenge and could well go down to defeat.

In the open primary this year, Democrat Doug Applegate, a retired Marine colonel — the first in his family to attend college — came within 5 points of Issa, and he's been gaining steam ever since.

After a late September poll showed Applegate leading Issa 46 to 42, the race was highlighted nationally when President Obama called Issa “Trump before Trump,” holding him up as a prime example of how dysfunctional and dishonest the House GOP has become. This was after Issa produced an especially mendacious campaign mailer portraying himself as Obama’s bipartisan partner.

“Darrell Issa, a member of Congress who once called for my impeachment, who questioned where I was born, is now advertising, claiming we worked together, Obama said."We can’t let this stand,” added the president added, going on to endorse Applegate as an “exceptional candidate” whose Marine Corps background makes clear that he knows “true patriotism is about serving our country in any way we can, that our duty as citizens is to keep America strong and working for all of us.”

Those aren’t just lofty words, however. What’s apparent on the ground is a remarkable illustration of a new book I wrote about recently, “Asymmetric Politics,” by political scientists Matt Grossmann and David Hopkins. They make clear that the two parties are essentially different: The Democratic Party is focused on producing concrete solutions for citizens, whereas the Republican Party is obsessed with conservative ideological purity.

Issa has spent his entire political career playing the role of conservative warrior. In 2003 he bankrolled the recall petition against California Gov. Gray Davis, only to drop out after Arnold Schwarzenegger swooped in to grab the seat, which Issa had assumed would be his for taking.

After the GOP took over the House in 2010, he became chair of the Committee on Oversight and Government Reform, and told Politico, “I want seven hearings a week, times 40 weeks.” Issa became the GOP’s witch-finder general, seeking scandal after scandal in an effort to destroy Obama’s presidency. During all this time, he has seriously neglected the needs of his constituents.

The 49th district “has a huge veteran population that has largely been unserved by Darrell Issa, and the veterans' population has had it with Issa,” Applegate said during a recent conference call with Progressive Democrats of America. “So we're able to tap into 45,000 households that are veteran households, that are Marine households, and I don't have to get into anything other than I'm a Democrat, grew up in a union family, I'm a retired Marine colonel, and an Iraq veteran.”

What’s more, Applegate has lived in the district since first having been stationed at Camp Pendleton in 1981. And he doesn’t shy away from his progressive values, though he doesn’t like pigeonholing himself along the political spectrum.

“The PDA’s endorsement essentially puts me in line with all the issues and the core values of Bernie Sanders’ campaign,” Applegate said on a more recent Progressive Democrats of America call. “I've always been there, and I think those are the best way[s] to solve the country's problems. They don't have anything to do with party. It's about putting country first.”

When asked about his top three issues, Applegate talked about each in terms of getting things done, with a combination of seeking broad cross-party buy-in and advancing progressive goals. If you want government to help solve problems, his first issue is a no-brainer.

“The key thing to solving problems with government is to address transparency, and I'm talking about transparency in a post-Citizens United world,” Applegate said. The candidate called the notorious Citizens United v. Federal Election Commission decision the worst handed down by the Supreme Court since the Dred Scott decision, a telling marker of the progressive moral outlook he brings to the table.

But then there’s the practical side. “It did leave one crack in the doorway, and that is the disclosure requirements," Applegate said. "If there's ever a time to change the metric in the leverage point with conservatives, you point to the presidential candidate that even the Koch brothers can't support and [the fact that] the Republican Party is going to be severely damaged by it,” he said referring to Republican presidential nominee Donald Trump.

That may be an unlikely point of bipartisan agreement from a Washington perspective, but it makes sense from where Applegate stands. He thinks it's possible to get a bill passed requiring full disclosure of independent committee (or super PAC) money.

It’s only one step forward in the larger struggle but “the chance to make financing more transparent is something that can be done sooner rather than later," Applegate argued, as opposed to "the heavier lift of a constitutional amendment or a new Supreme Court.”

Second, Applegate has focused on the issue of fixing veterans’ health care, which he frames first in terms of delivering on “the promises made since the Civil War to veterans in the U.S. armed services." Said Applegate: "It’s the right thing to do. The public will always support that." But he said there's another net effect since the VA system is the largest health care system in the United States and the only single-payer one. "If we're ever going to get to health care as a matter of right for all U.S. citizens, the VA has to be made to work.”

It won’t be easy, Applegate said. It’s not just a matter of fixing the intake problems but also of working to integrate the VA system with military hospitals and other public institutions. The larger goal is to “capture synergies” that could set a national standard for how single-payer health care for all will work in practice, Applegate said. “It has to be integrated, and you have to remove it from any type of for-profit private effort. Because [in that context] you're always going to fall short of effectively delivering health care as a matter of right.”

Applegate’s third key concern is jobs and the economy. As he put it, the best way to jump-start the economy “is to start betting on wise technology in the areas of sustainability, as well as renewable energy.” But that will entail a political fight — and a need to think outside the box in terms of allies. “You have to go head-to-head with one of the most powerful wealth and power centers in history, and that's the carbon fuel industry,” he said.

In terms of allies, Applegate said, “Progressive Democrats need to look no further than the Pentagon because the Pentagon — and particularly the Navy and Marine Corps — have been asking for a Manhattan Project in the area of renewable energy.”

That may sound like an impossible stretch for some progressives, but for at least a decade now the Pentagon has been more realistic about climate change most of its right-wing cheerleaders. What’s more, people with real-world military experience tend to be far more realistic about the limits of military solutions alone.

“You get Republicans very nervous, very quickly, if Democrats are standing with national security goals with the military, and the Republicans are seen as the obstructionists, which they have been,” Applegate said. “It's a huge opportunity.”

Which leads him to a broader point. “When I talk to people, whether they're ‘no party preference,’ Republicans or Democrats, they all start focusing on how we how we go about changing the metrics and the leverage points to get to solutions not to continue to repeat the same tired arguments," Applegate said.

"They want to see change," he said. "That also draws in a very important segment of demographics that progressives need, and that is the millennials. They really have no place to go other than progressives and liberal Democrats.”

Does Applegate have all the answers? Of course not. Nobody does. But the pragmatic approach he advocates — reaching out to bring different groups of people together around solving problems — embodies what Grossmann and Hopkins identify as the Democratic Party’s source of strength.

At a time when the GOP is fragmenting as never before, in part because its internal warring camps no longer agree on what their conservative ideology should be, Applegate’s candidacy is worth studying, regardless of what happens on Nov. 8. Every state and every congressional district around the country offers different specifics. But the same sorts of challenges that Applegate is trying to tackle in Southern California — drawing on past experience to forge new majority coalitions around solving practical problems — face us all. None of us can solve them by ourselves.