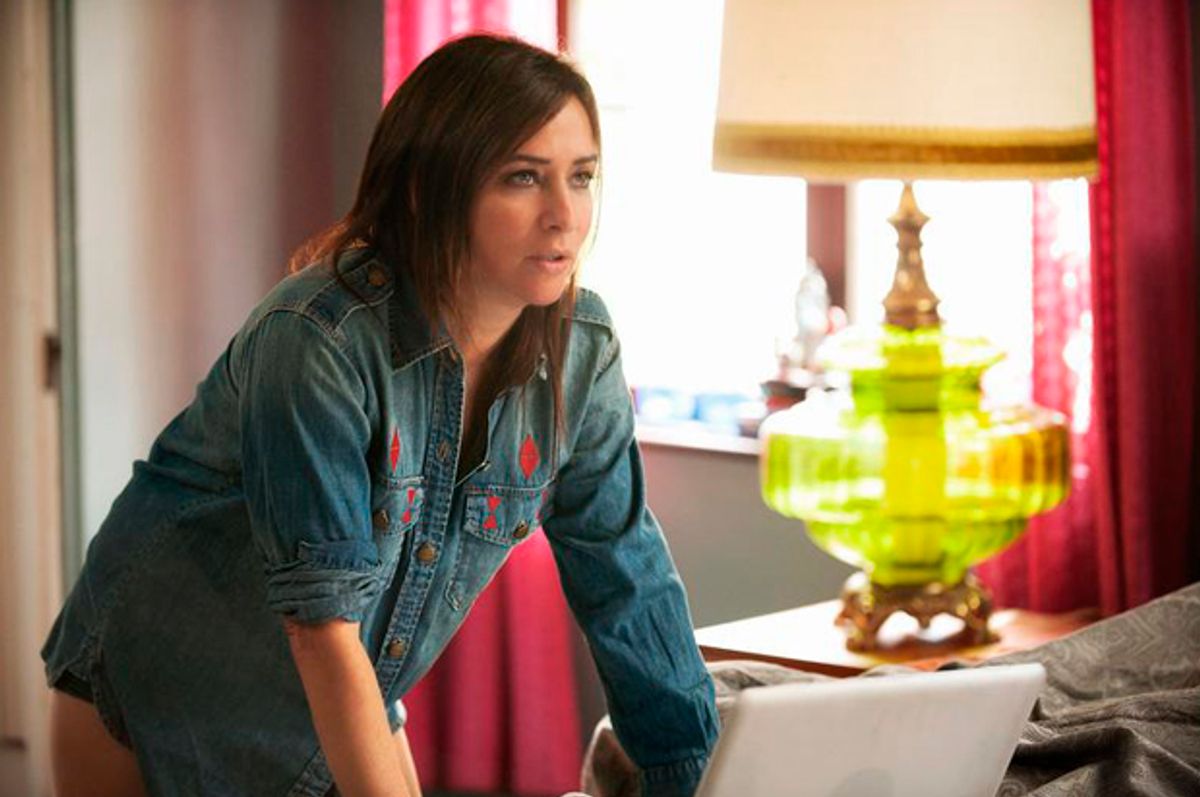 The week after the world became aware of the Donald Trump groping audio from 2005, FX’s “Better Things” aired an episode that depicted another typical chapter in the life of Pamela Adlon’s character Sam Fox. It opens with Sam visiting an art show where a rich man’s flirtations with her are interrupted by the entrance of his much younger lover.

Later while savoring a nightcap with one of her best male friends, she bemoans the decline of her attractiveness to the opposite sex and her fear of death. “It turns out the scary part of getting older is young people,” she observes. “It’s like we’re the Indians, and they’re the white settlers, and they keep coming and they take all of the resources. And all we’re left with is diseased blankets.”

But as another woman under siege once said, tomorrow is another day. And the very next day for Sam brings work on a sitcom pilot, during which she’s sexually harassed by both the younger actor playing her son and the man portraying her husband. The older actor casually tells her, “Slap a pair of tits on you; you’d be just my type!” Later she offers the younger man a ride home, only to be forced to kick him out of her car after he insists on whipping out his penis.

In retrospect that episode, titled “Alarms,” feels downright prescient. Never has there been an election season in which such ignorant discussions about a woman’s work have twisted into demeaning, disheartening brawls. But it’s hard to say whether it’s amazing or depressing to know that Adlon co-wrote the episode with the show's co-creator Louis C.K. months before the presidential campaign cycle devolved into a triggering trauma parade.

The reason that episode felt so true is because Adlon based on it on moments from her own life, whether experienced directly by her or those closest to her.

“Somebody had commented . . . that I was fueling the feminist fire with that episode,” she said in a recent phone interview. “'How did Pamela know that the whole thing with the groping, the Donald Trump and all this stuff?' I don’t know. It’s crazy how it all played out."

“It feels like I was somehow psychic,” she added. “But this is what has been happening in our lives all along, all the time. It’s just being talked about more; that’s what the difference is.”

For the most part, the first season of “Better Things,” which airs Thursdays at 10 p.m, has provided emotional respite for its viewers by reflecting the universal experiences of women back to them through the various truths, triumphs and indignities weathered by Sam and her teenage daughter Max (Mikey Madison), middle child Frankie (Hannah Alligood) and her playful youngest girl Duke (Olivia Edward).

Adlon, of course, is not immune to the types of ravages that have been discussed during this election cycle. In spite of it all, she’s maintained a sanguine outlook that mirrors Sam’s attitude in the show.

“I have three daughters, so they’re all so aware of what’s going on and they just are very engaged socially and politically,” she said. “You try to get through every day and not be traumatized by things you read and hear and know. There’s always something awful and there’s always a new day. And there’s always going to be something positive coming around the bend, so you try to stay positive.”

Following a thematic structure similar to that of Louis C.K.’s FX comedy "Louie" (Adlon played C.K.'s friends-with-benefits on his show), “Better Things” shirks the classic sitcom structure by refusing to follow one specific storyline, amounting to a ride-along as opposed to a passive viewing experience. Basically, a viewer is dropping by to hang out with Sam, who happens to be a 50-year-old single mother scratching out a living in the entertainment industry.

Making it as an actor means possessing an endurance in spite of facing constant rejection. Making it as a woman under those circumstances means building up calluses around her ego as casting directors and fellow actors say and do denigrating things, whether behind her back or to her face.

We’ve witnessed Sam contend with all types of social and professional slights during this season of “Better Things” even as she tends to her children without any help from her ex, wrangling her unpredictable mother Phil (Celia Imrie) along the way.

And as the politics percolating in the real world grow more poisonous toward women, accepting the invitation to hang out with the Fox family has become something akin to an act of self-care. Sam is the cool friend who doesn’t mince words, saying all the things that we viewers wish we could say but doing so in a way that’s simply raw and true. She’s also the surrogate TV mom many fans wish they could have had.

“I was far more interested in telling women’s stories than focusing on myself,” Adlon said. “I really wanted to make that be a massive heart of my show without hitting the nail over the head of the vagina, if you know what I mean. I did not want it to be like, this is a feminist pedagogy or whatever. I just wanted it to be a show that was very female-centric but not feel like it.”

Thursday night’s episode, for example, involves her taking Max and one of her friends to a concert but swiftly becomes both an allegory for the perks that are lost with aging and a celebration of the perspective a woman gains.

Sam commits a mortifying faux pas that affects Max’s friend, only to smooth it over with a speech that would be horrifying for most teens to witness their mothers deliver in real life. At the same time, however, it drives home Adlon’s larger point about womanhood — that mothers are just the grown-up version of girls who have made mistakes they would rather forget.

“Your mom’s hard core, yeah. But she’s so real,” Max’s friend tells her. “Like, she talks to me and she notices things and she cares. Not like my mom would ever talk to me like that. Like straight up, without freaking out. Or even just talk to me.”

Many writers took note of the fact that the season premiere’s final moment included a chyron that read “dedicated to my daughters.” The sweetness of that dedication felt beautifully personal way back in September. Knowing what we know now, Adlon’s choice to end the first season with the same dedication feels political and empowering on a much broader scale. (Apparently her kids were not as impressed as the rest of the world, according to Adlon.)

And like the rest of the first season’s episodes, next week’s season finale is marked by a perspective-shifting moment. But by now viewers shouldn’t expect that moment or any others to dramatically shift the show’s feeling when it returns for its second season, which FX officially picked up in September.

“It’s just the way that life is. You can have revelatory moments and life still goes on," she said. "Life keeps getting propelled.”

Added Adlon: “It’s important that people trust the way that we are telling these stories and [that] we are going to take care of it. It’s just all part of the big picture.”

We can only hope that by the time season 2 of “Better Things” arrives, we’ll all be living in better times.