Because billionaires have no political voice in America, the Silicon Valley mogul spoke at the National Press Club 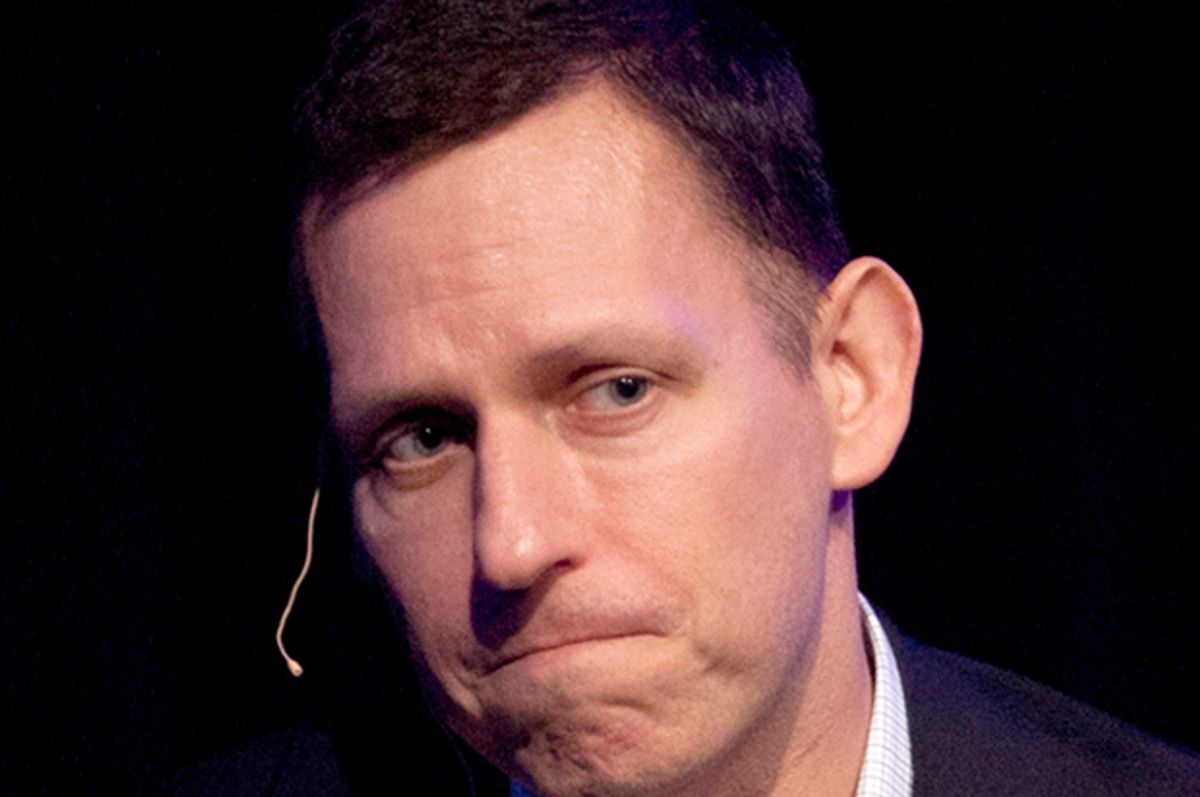 Peter Thiel was invited this week to speak at the National Press Club for some reason. Maybe the press club thought that, seeing how difficult it is for a billionaire to get his views heard in American society, Thiel deserved a bully pulpit from which to promote his libertarian ideology and ardent support for Donald Trump.

Maybe the professional organization for journalists wanted reassurances that Thiel does not plan to help sue all media outlets into oblivion — just the ones that offend him.

What seems clear after watching Thiel’s speech and listening to the insipid Q&A afterward is that even after the 16-month-long Grand Guignol that has been Republican Donald Trump’s presidential campaign, at least some people have still not learned an important lesson — that a person’s financial success does not mean everything he or she says is worth listening to.

Thiel can dress up his politics as some sort of principled libertarianism, and boy did he try hard to do so on Monday. But the obvious contradictions do not survive close inspection. Which leads one to the inevitable conclusion that Thiel’s own value system can best be described as “whatever resentments Peter Thiel happens to be feeling at any particular moment are correct.”

How else to explain, for example, his view of Hulk Hogan, whose lawsuit against Gawker Thiel funded, as compared with his indifference to the fate of A.J. Daulerio, the former Gawker editor made destitute by the enormous judgment against the media company? Thiel told the press club audience,“If you’re a single-digit millionaire like Hulk Hogan, you have no effective access to our legal system.” This means, I guess, that in Thiel’s world, someone with only a few million dollars to his name will struggle to achieve justice and needs a billionaire to help him out.

Yet in the wake of Hogan’s victory, his Thiel-funded lawyers were still pursuing whatever pennies they could squeeze out of Daulerio in order to satisfy the judgment, despite the fact that the unemployed journalist was all but destitute. It was a remarkable display of pettiness that bore no relationship to any overarching worldview above the level of “I’m rich and can afford to screw you.”

Though it did explain Thiel's contention on Monday that Gawker had been a “singularly sociopathic bully.” You could say calling out a media organization for bullying while supporting a presidential candidate who has made his reputation by bullying or trying to bully everyone in his path (the media, primary opponents, Mexico) takes some chutzpah. But that assumes Thiel has the self-awareness to recognize that this is what he’s doing.

Or take Thiel’s past support for presidential candidates. As someone who told the audience Monday he “always had a bias favoring outsider candidates,” Thiel supported former congressman Ron Paul’s bid for the Republican nomination in 2008 and 2012. The outspoken noninterventionist Paul would have been a good fit for the anti-hawkishness Thiel displayed on Monday when he harshly criticized Hillary Clinton’s plan to establish a no-fly zone in Syria, calling it “a mistake even more reckless than invading Iraq” that would “risk a direct nuclear conflict” with Russia.

How then does Thiel reconcile this anti-hawkishness with his support for Trump? By lying. On Monday he claimed that “Trump voters are also tired of war.” This would come as an enormous surprise to anyone who has ever heard the crowd at a Trump rally cheer on his promises to seize the oil of other nations and “bomb the hell out of ISIS.” It is one thing to admit that millions of voters don’t agree with Trump but quite another to project your own biases onto them and the candidate, despite all the contradictory evidence.

People support the political ambitions of friends and business associates all the time, even if their politics don’t completely line up. But it does not make Thiel in any way special or principled. It just makes him more of a garden-variety rich guy trying to buy some political influence — one who hasn’t had to answer too many hard questions in the past or been forced to think through his philosophy at a level higher than that of an undergraduate seminar.

This pretty much explains Thiel’s support for Donald Trump, including the $1.25 million donation he recently dropped on the carrot-colored goombah’s presidential campaign. In his speech, Thiel tried to dress up his support as a principled stand against the “contempt” elites hold for Trump and lavished the real-estate mogul with bizarre praise for bringing “a much-needed dose of humility in our politics.”

This simplistic view of politics is on the level of an “it takes an outsider to shake up our broken politics” shtick that has seen rich guys drop untold amounts of money on vanity presidential campaigns in the past. Thiel can criticize politicians, journalists and coastal elites for spending too much time in “bubbles” that keep them insulated from the real world — as he did on Monday. But why is he any different?

Based on Monday’s speech, he isn’t. But he has a thick checkbook and a belief that his money makes him worth listening to. And he’ll keep on believing that, so long as even journalistic organizations like the National Press Club refuse to challenge him.